Add an Event
Newswire
Calendar
Features
Home
Donate
From the Open-Publishing Calendar
From the Open-Publishing Newswire
Indybay Feature
Publish to Newswire
Add an Event
Related Categories: East Bay | Police State & Prisons | Racial Justice
Mehserle's Change of Venue Motion Exhibits 13 & 14: Local Groups Involved in Protesting
by dave id
Sunday Oct 4th, 2009 11:13 PM
Johannes Mehserle's attempt to avoid a trial in the same county in which he murdered Oscar Grant III claims that the groups listed below have had an "extraordinarily deleterious effect on the chance of empanelling an impartial jury in this county." It remains to be seen how or if Mehserle's defense team will use the groups listed in any oral arguments made. The hearing to decide if the trial venue should remain in Alameda County is scheduled for 1pm, Tuesday, October 6th at the Alameda County Superior Court House. 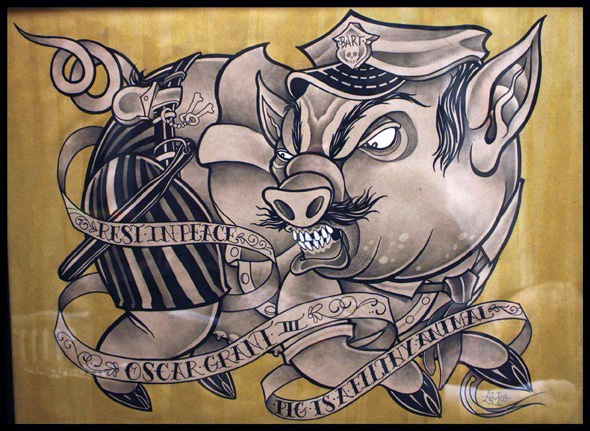 One thing to note is that of the groups included in Exhibit 13, many have been merely peripherally involved in the Justice for Oscar Grant Movement, when other more central groups and community activists are not included in the exhibit at all. Perhaps it has something to do with a defense strategy of trying to include a certain spectrum of supposedly scary and "radical" speech from the chosen groups' About Us web pages (referred to as "What They Believe" in Exhibit 13). Or perhaps those who didn't make the hall of fame attachment here simply didn't come up in web searches done by defense attorney Michael Rains' staff.

While the venue change attachments list identifies those in the exhibit as "some of the most prominent local groups that focused on the incident," amongst those counted in web sites listed below are at least one that appears to be an individual's blog, another one or two that have written apparently just a single article related to Oscar Grant, one that has been defunct for months more or less, and another that was possibly only involved in real organizing for a sole demonstration in January. Three or four of those listed in the attachment are indeed known to have substantially contributed to organizing and/or producing large amounts of related media.

Other organizations listed in the motion for change of venue but not included in the attachments here are the Town Halls for Justice for Oscar Grant, the Revolution Club, Uhuru House, and coverage on Indybay.org. 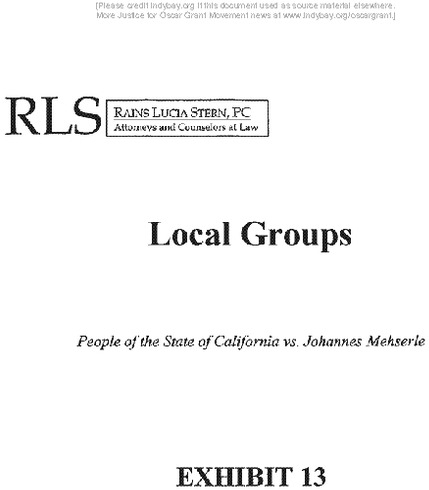 Exhibit 13 - Description of local groups involved in protesting, publicizing, and weighing in on the Grant shooting and Mehserle prosecution, with relevant links and images.

"Weighing in" sounds suspiciously like "expressing their rights of free speech," no? It also allows Mehserle's defense to list anything they can find on the web that merely mentions Oscar Grant, as an opportunity to include supposedly scary and "radical" speech from these groups' About Us web pages (referred to as "What They Believe" in Exhibit 13).. 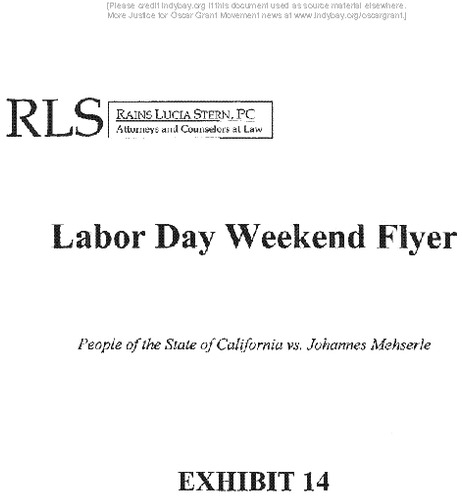 On page 50 of Mehserle's motion to change venue, it reads: "Days before the filing of this motion, during the weekend shutdown of the Bay Bridge (and the concomitant increase in BART ridership), a local group committed to seeking Mehserle's conviction and prosecution of other officers involved in the January 1st events took the BART system to remind the public about the case. The group posted fliers throughout the BART system picturing the BART police logo, with the words, "Police Murder. BART lies. We die." (Exhibit 14) The flier also pictures an officer shooting a man who is clearly restrained by the police. Members of the group spoke on BART trains throughout the system, making various (and often patently false) factual claims about the evidence in the case. Videos of the speeches, as well as an article describing the groups efforts to publicize the case, were posted to the hybrid news/advocacy website indybay.org. See http://www.indybay.org/newsitems/2009/09/06/18621071.php."


Of course, the motion does not mention what exactly was "patently false," it simply makes the claim and hopes that that is enough. For more information on this action, see http://www.indybay.org/newsitems/2009/09/20/18622616.php.