by dave id
"The People are troubled by the defendant's arguments for several reasons."

Defense attorney Michael Rains wants to have Johannes Mehserle's murder trial moved out of Alameda County. As such, on September 11th, Rains filed a 75-page motion for a change of venue with thousands of pages of supporting documents, mostly copies and transcripts of every related print and television news story since his client killed Oscar Grant III by shooting him in the back on video. To make its case that the citizens of Alameda county can't fairly be jurors on the case, the defense motion uses illogical and racist arguments, and it includes strange citations of venue change cases from the 1960s where the courts were concerned with African American protesters receiving fair trials in the counties where they were arrested protesting racial injustices. On September 24th, just one day after BAMN held a press conference for the corporate media accusing the District Attorney's office of not working to vigorously challenge Mehserle's change of venue filing, prosecutors David Stein and Michael O'Connor filed their opposition with the court. The opposition is a thorough rebuttal that knocks down each and every argument made by Mehserle's defense team. The hearing to decide if the trial venue should remain in Alameda County will be heard by Superior Court Judge Jacobson at 1pm, Tuesday, October 6th. 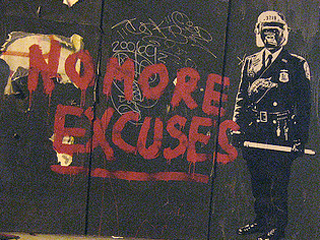 In its opposition filing, the prosecutors waste no time in addressing the juror bias argument central to the motion to move the trial: "To hold that the mere existence of any preconceived notion as to the guilt or innocence of an accused, without more, is sufficient to rebut the presumption of a prospective juror's impartiality would be to establish an impossible standard." It then proceeds to address the four areas central to venue decisions -- nature and gravity of the offense; nature and extent of pre-trial publicity; nature and size of the community; and status of the defendant to the victim -- as well as several others raised by Mehserle's defense team.

Yes, the gravity of the charge is serious, the opposition concedes, but that alone is not enough to require a venue change. Far more heinous crimes have been denied changes of venue by the California Supreme Court, including the notorious "Night Stalker," who was convicted of multiple counts of murder and rape. Additionally, the opposition notes that this is not a capital case -- while Johannes Mehserle is facing conviction for the murder of Oscar Grant on January 1st, he will not be subjected to the death penalty.

Again acknowledging a defense point, that media coverage of the case has been widespread, the opposition notes that "pervasive publicity alone does not establish prejudice" and that transfer of venue is not required even when there is extensive news coverage of a case. In past instances where media reports referred to those accused as "Jack the Ripper" or the "Thrill Killer," and yet venue change was denied, most of the coverage was a neutral reporting of the known facts. The coverage of Mehserle's case has diminished over time, and that was a key factor the California Supreme Court has relied on in a prior denial of a venue change. The opposition adds that while many have undoubtedly seen the video of the New Year's Day shooting on television of the internet, the fact that Johannes Mehserle shot Oscar Grant in the back is not even in dispute by the defense. Tearing into Rains' reliance on the study by Edward Bronson he commissioned for the venue motion, the opposition points out that the 44.8% of those responding who thought Mehserle was guilty does not meet the threshold for venue change. Flipping Rains' misuse of Oakland history in his motion back on him, the opposition declares that despite all of the publicity of the case to date, that over half of Alameda County residents are either neutral or favorably inclined toward the defendant should not be surprising to those familiar with "this community's long history of tolerance, fairness, and open-mindedness."

The opposition declares that the size and nature of Alameda County's population weighs heavily against a change of venue. While six million-person Los Angeles has seen cases moved out of the county (i.e. Rodney King), many smaller counties have had motions to transfer venue denied. And the nature of Alameda County residents includes a "historic tradition of open-mindedness."

The opposition declares that Mehserle's defense got it backwards when it wrote about that status of the accused and the victim (whereby "We are Oscar Grant" has been a call of those seeking justice for the murder). It is their status before the crime that is the focus of this factor when determining if change of venue is appropriate, not after. With neither having been prominent prior to the murder, the court concluded in a prior case that "any uniquely heightened features of the case that gave the victims and defendant any prominence in the wake of the crimes, which a change of venue normally tries to alleviate, would inevitably have become apparent no matter where defendant was tried." And contrary to Rains' assertion that Mehserle would be viewed as an outsider during a trial in Alameda County because he grew up in Napa County, he is not a member of a minority group, a drug addict, a parolee, nor a person with a history of mental problems, and most jurors tend to view police officers favorably. "The fact that the victim may be the object of some sympathy is far outweighed by the large, diverse, and fair-minded population of Alameda County."

While political factors are not typically part of venue change decisions, courts have ruled that venue might be changed when cases involve not just politics, but political controversy. In such a case, political adversaries publicly took opposing sides regarding a pending trial. Even in the seemingly similar Rodney King case, the arguments made in Rains' motion fall flat. In Los Angeles prior to the trial, a power struggle between the Chief of Police, the Mayor, the City Council, and the Police Commission ensued, all of which occurred during election campaigns for City Council where various candidates took public positions for or against the Mayor and the Police Chief. None even close has happened in Alameda. Additionally, 81% of those surveyed in Los Angeles at the time believed the defendants were guilty, nearly twice the number of those who have formed a similar opinion in Alameda. The defense's pollster, Edward Bronson, recorded just 16.5% who believed that Mehserle was "definitely guilty," while in the Rodney King case that number was four times higher. There have indeed been numerous protests, the oppositions notes, but most have been peaceful, and those of late are "occassional" and "sparsely attended." As noted in a venue consideration for a prior case, "juror exposed to publicity may still serve if he or she can lay aside his or her impressions and render a verdict based on the evidence presented in court." Besides, potential jurors unable to lay aside fears of violence upon a hypothetical not-guilty verdict or other biases can be removed via normal jury selection processes (known as "voir dire").

Rains' motion on Mehserle's behalf especially targets African Americans as being incapable of impartiality. The opposition points out the contradiction of the venue motion claiming that African Americans" "should and must be a part of the jury" and then saying that the defense intends to subject potential African American jurors to "intense, awkward, personal, and uncomfortable" questioning, and that it is "entitled to question every black juror, in private, in substantial depth, about pre-judement." The People, as in the The People of the State of California versus Johannes Mehserle, "are troubled by the defendant's (racially focused) arguments for several reasons." The crucial question is not if potential jurors have heard about the case, or even if they have formed an opinion about it, but rather can they judge the case solely based on the evidence presented at trial. The opposition asserts that The People have confidence that African Americans in Alameda County can indeed serve fairly and impartially. The opposition goes on to declare alarm at the defense's apparent belief that it can subject African American jurists to a separate screening procedure out of public view. The court might find some sort of additional screening of all potential jurors is appropriate, but to "single out African Americans is unwarranted, unprecedented, and inappropriate." The opposition filing reminds the court that murder is the issue in this case, not race.

The opposition notes that the most recent venue change case cited by the defense is the nearly two-decade old Rodney King case (Powell v. Superior Court, 1991), and since that time venue change cases have been viewed more stringently. The opposition adds that trials have had venue changes since then, however they are rare and there are good reasons for keeping a trial at its local venue. First, would be the costs involved of relocating staff and transporting witnesses. Next the opposition notes that the trend away from venue transfers reflects an awareness of the pervasiveness of video and modern mass media and that in such an environment the public has become more discerning in it perception of such imagery. Significantly, the opposition gives credence to the rights of the community to have a trial heard by its own citizens, noting that this benefits both the "jury rights of a defendant as well as the right of the offended community to pass judgement in criminal matters."

Perhaps most critically of all, after having dispensed with Meheserle's points in support of a change of venue, the opposition concludes that "any potential for bias is best resolved by voir dire rather than speculation." And that, in effect, sums up the defense's motion, speculation about bias rather than actually having proven it. The opposition nails Rains' argument as being similar to one that was shot down by the court in another change of venue hearing (People v Prince) where the defense claimed that potential jurors could not be trusted to know or honestly say whether they can be fair. While the opposition acknowledges the possibility that the voir dire may reveal such widespread bias as to require a change of venue, "[t]he People urge the Court, however, to take the word of the jurors on this matter, not the word of the defense expert."


END_OF_DOCUMENT_TOKEN_TO_BE_REPLACED
§The People's Points in Opposition to Change of Venue Motion, 9/24/09
by dave id 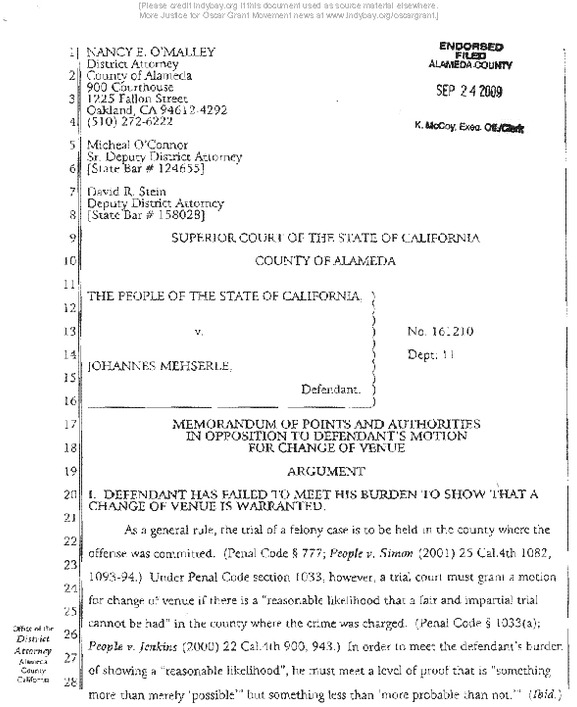 END_OF_DOCUMENT_TOKEN_TO_BE_REPLACED
Add Your Comments
Latest Comments
Listed below are the latest comments about this post.
These comments are submitted anonymously by website visitors.
TITLE
AUTHOR
DATE
We need to be careful
Johnny
Support Independent Media
We are 100% volunteer and depend on your participation to sustain our efforts!