by dave id
Minister Keith Muhammad speaks first at September 26th Town Hall for Justice for Oscar Grant and tells the story of a man who was on death row in San Quentin, who had slapped and choked the warden while incarcerated, but then was later able to secure his own release. He notes that it seems like the fight now can't be won, but we are on the right side of justice.

Reverend Henry WIlliams talks about a scene he witnesses in a liquor store at Fruitvale and Foothill just before the Town Hall. A woman was beaten by store workers and then taken away in handcuffs by OPD. Roxanne Lewis speaks, who also witnessed the beating, says she was an older woman, with a red/swollen face from the abuse, after she had thrown fruit at the workers. Police arrived, ready to tase the woman, but witnesses yelled not to. Police didn't listen to witnesses or take any statements and just left after the ambulance took the woman away.

Minister Keith says our duty is to take care of people. He discusses the real meaning of the word Jihad. First, it is compassion for those suffering injustice. Second, it is raising one's voice against what's wrong. And third, it is to engage physically, mentally, and spiritually for change.
Listen now:
Copy the code below to embed this audio into a web page:
Download Audio (9.3MB) | Embed Audio
(audio 27:01)

Wilson Riles, who was about to head to an event for justice for African immigrants and through U.S. foreign policy, discusses defense attorney Michael Rains' legal strategy as per a conversation Wilson Riles had with a lawyer. Rains' own personal racism jumps out from the venue motion filed. The motion is intended to push our buttons, so that we overreact and justify his motion to change venue. The motion is weak, not likely judge will move, but it's all over the place and focuses on just Oakland, not all of Alameda County, so what is his goal? Wilson Riles then notes that the DA in the OJ trial had to be pressured to allow African American jurors by local clergy. He adds that another county might prejudge Oscar Grant as having deserved it. He speculates that there are politics in the case with DA Tom Orloff resigning (cops mad for Orloff's pursuit of the Oakland Riders and Mehserle and Orloff's potential upcoming election was looking bad). Even defense attorneys have to deal with DA's office on motions, etc. Orloff's hands are now clean of the case, what will new DA O'Malley do? We need to watch her closely, might be politically in her re-election interest for case to move. Prosecutor Stein needs to stand like in OJ case regarding kicking all African American jurors off the jury.

Minister Keith mentions a recent Discovery channel program that insultingly exaggerated that there are 10,000 gang members in Oakland when mostly what the program showed was sideshows. As for the Mehserle trial, he notes that there is no time to play with the DA and that he says we will organize against Nancy O'Malley's election if she allows a change of venue.

Shanta Driver of BAMN examines venue motion filed in the Mehserle case. She says it is very rare to get a change of venue. People of the community should decide. She uses select pages from the change of venue motion filing to make her points (see PDF below). On page 4 - in the 1960s cases cited first venue cases of black protestors getting fair trial in location they were protesting injustice.

She notes that it is rare that "we" are "The People of the State of California" in trials. She says that Oscar Grant's family does not own this case (with family present at Town Hall). If the case is lost, the people lose.

Shanta Driver adds that the video is not key to this case as in Rodney King because that trial was about excessive use of force and this one is about Mehserle's state of mind and intent. Mehserle's testimony about fear for life will be key (and backed up with Domenici's supposed fear). And they he'll cry and talk of his regret -- he's probably taking acting lessons right now for that purpose. That will play to a white suburban jury who will acquit because they will simply think he went too far but made a mistake and jury should give him a break.

Political decisions by Alameda DA O'Malley, California Attorney General Jerry Brown, and Obama's Justice department play a role. The DA needs to find evidence of Mehserle's racial bias from other cops like Pirone who used the N-word and they work on the same force.

Rains will argue if young/dumb Mehserle was charged, why not other more experienced officers.

"We are all Oscar Grant" -- the case is about other Oscar Grants, and people like videographers and those testifying, taking a stand against injustice.


Minister Keith Muhammad adds comments about the recent G20 in Pittsburgh, Pennsylvania where police attacked protesters and tested new technologies on people. There's video of a woman who threw her bike towards police harassing her from Davey D. Police produce aggressive crowds, not activist groups.

Minister Keith discusses how OPD swat faced an accused shooter in the same apartment complex as Lovelle Mixon. The Lovelle case and Meyers Nave report on BART call into question training. Yesterday cops didn't rush in as they did with Lovelle -- they warned neighbors and they waited until 3am (after 1pm chase).

He goes on to note that BART has yet to hold anyone accountable. Disband the BART police. DA O'Malley should fight the venue move, or expect a 6 month career as DA. He remembers back to the cameras on DA Orloff meeting on January 7th. The DA is a political position. Two supervisors did not vote for new DA O'Malley.

Minister Keith recalls all the talk from U.S. war hawks about war with Iran by the end of the U.N meeting last week.

Announcements of upcoming events are made at 1:05. 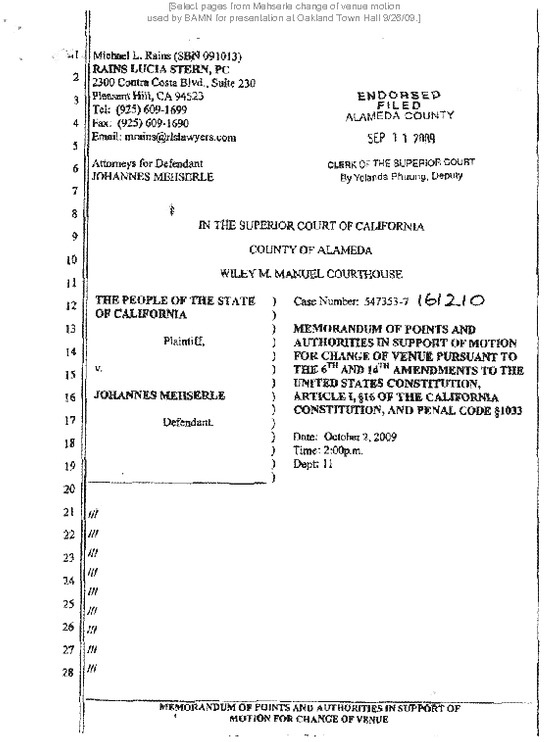 Download PDF (4.2MB)
The full motion can be found at http://www.indybay.org/newsitems/2009/09/16/18622182.php.
END_OF_DOCUMENT_TOKEN_TO_BE_REPLACED
Add Your Comments
Support Independent Media
We are 100% volunteer and depend on your participation to sustain our efforts!