Add an Event
Newswire
Calendar
Features
Home
Donate
From the Open-Publishing Calendar
From the Open-Publishing Newswire
Indybay Feature
Publish to Newswire
Add an Event
Related Categories: Santa Cruz Indymedia | Education & Student Activism | Labor & Workers
Rally and Walkout at UC Santa Cruz to Defend the Future of Public Education
by ~Bradley (bradley [at] riseup.net)
Thursday Sep 24th, 2009 11:49 PM
On September 24th, students, faculty, staff and alumni at University of California (UC) schools participated in a day of coordinated walkouts and rallies in defense of the future of public education. Hundreds rallied at the base of the UC Santa Cruz campus to protest the privatization of the UC system, which includes student fee hikes, faculty and staff furloughs and layoffs, executive pay increases, and cuts to courses, programs and services. The University Professional and Technical Employees (UPTE) held a daylong strike at all UC schools, with pickets at the main and west entrances of UCSC from 6am–6pm.

Rallies took place at the base of UCSC, amplified courtesy of People Power!'s human-powered bicycle generator, at 12pm and 3:30pm. After the 3:30pm rally, students marched and occupied the intersection by the Bay Tree Plaza. From there, it was announced that a building occupation was underway, and people moved to the Bay Tree Plaza to support an ongoing inhabitation of the Graduate Student Commons. The following photos and notes are from the 12pm rally. 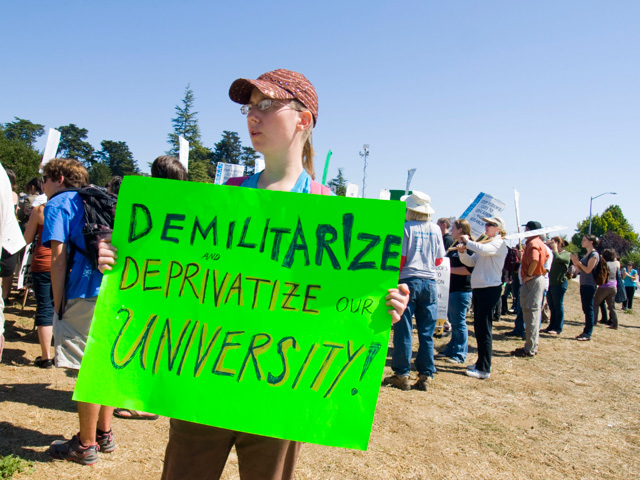 For more information and to sign a petition, please visit:
http://www.ucfacultywalkout.com and http://www.upte.org 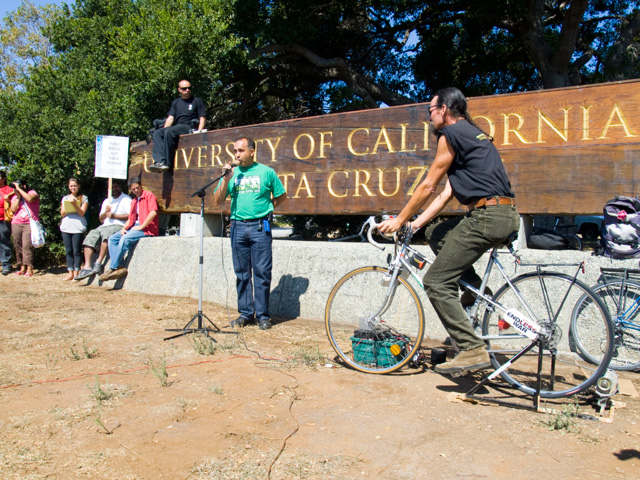 AFSCME won a decent contract. UPTE can do the same thing. It will take the support of all our friends, family and coworkers. Sí Se Puede.
§Ken Lyons
by ~Bradley Thursday Sep 24th, 2009 11:49 PM 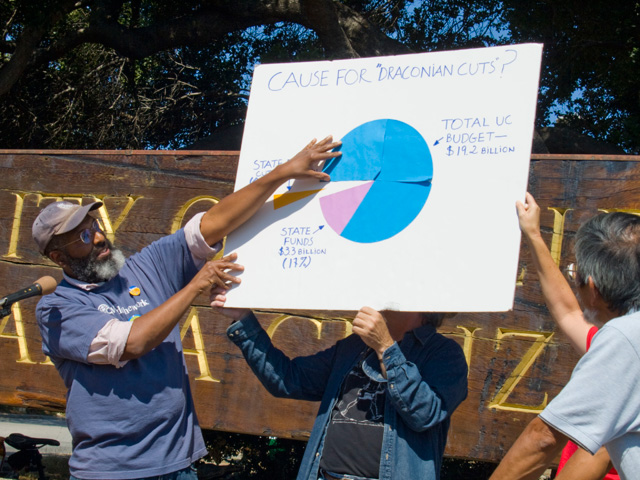 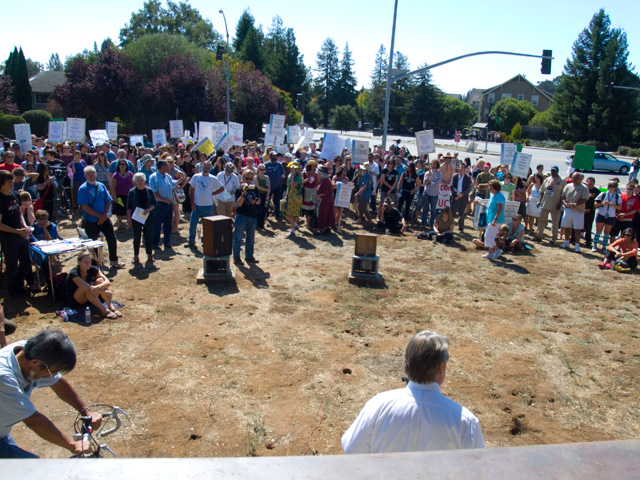 It was under Regan that they started charging fees for classes. It represents killing the dream of education in California. We should be investing more in education, not looking for places to cut.
§Bill Monning
by ~Bradley Thursday Sep 24th, 2009 11:49 PM 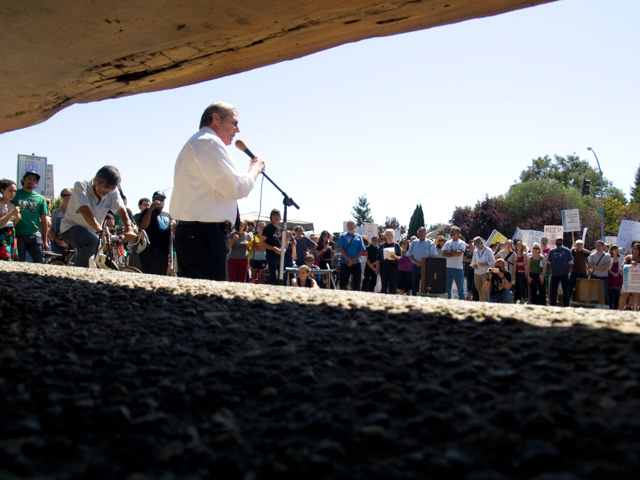 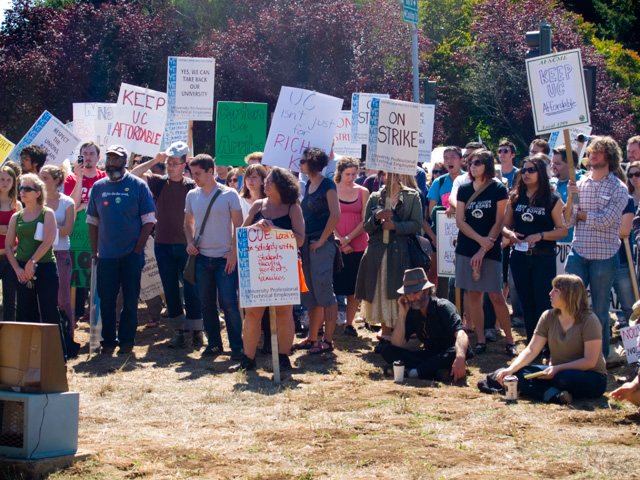 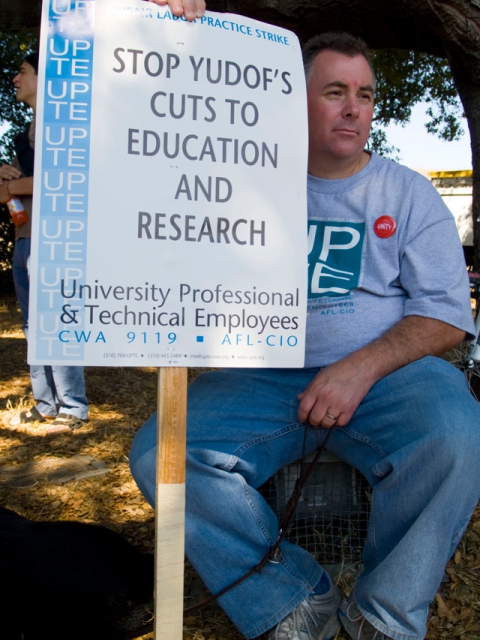 original image (640x853)
Eric Rice is an employee in the UCSC Registrar and has worked there for nine years. He is glad that people showed up for the September 24 Day of Action.
§Victor
by ~Bradley Thursday Sep 24th, 2009 11:49 PM 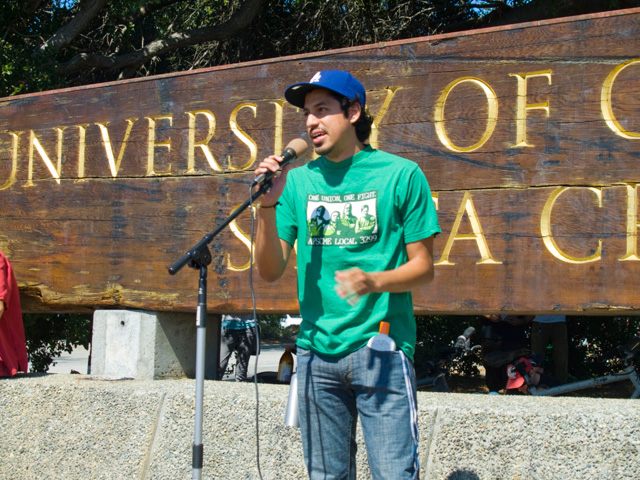 Victor from the University of California Students Association:
http://www.ucsa.org/ 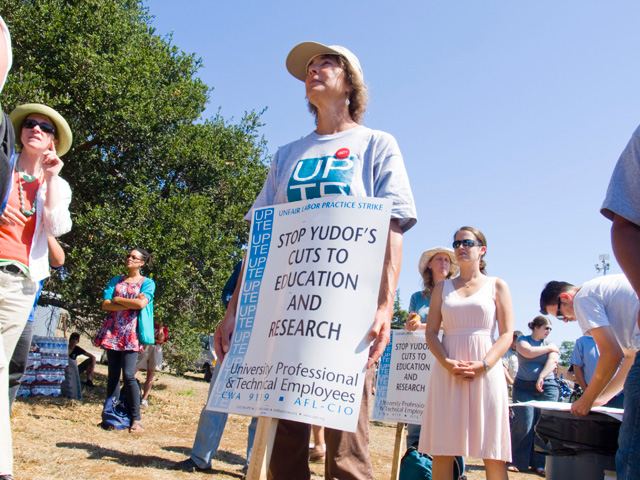 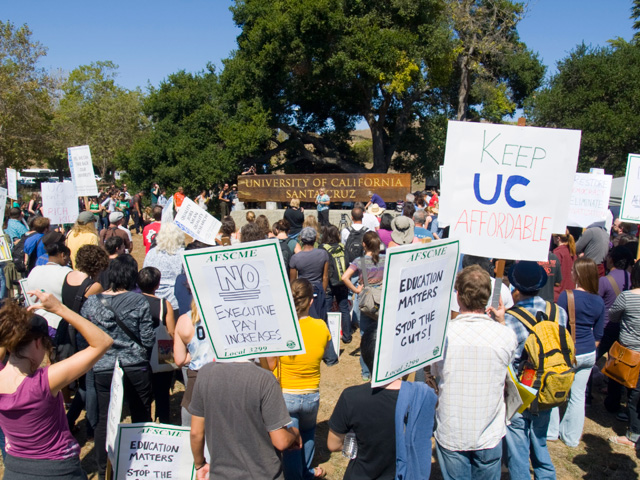 Dana Frank is Labor Historian at UC Santa Cruz and a graduate from Stevenson College:

Women and people of color are being targeted, such as Guillermo Delgado and Susan Jonas. There is plenty of money for the business and engineering at UCSC.

¡Basta Ya! Enough Already
No more layoffs.
Reinstate the people that have been laid off in the last year.

We are now part of a new university. We faculty members have learned so much from the UAW graduate students, from the AFSCME workers, from CUE and from UPTE.

If anyone can shut down this school, UPTE can shut it down in five minutes if they went on an indefinite strike.
§Raging Grannies
by ~Bradley Thursday Sep 24th, 2009 11:49 PM 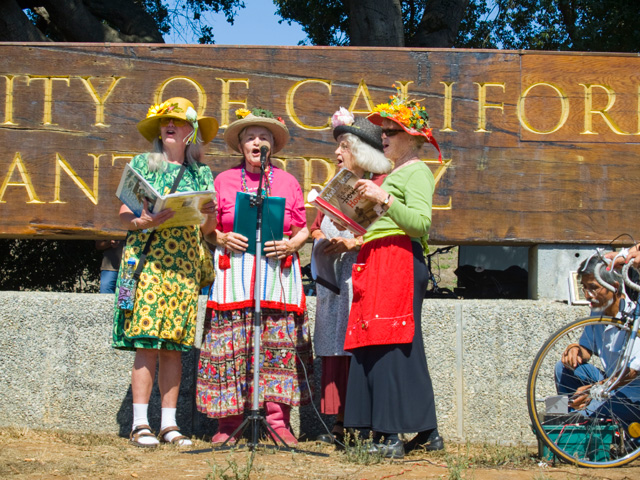 These Raging Grannies are part of the Santa Cruz Branch of WILPF, the Women's International League for Peace and Freedom:
http://wilpf.got.net/

California You're So Dumb: 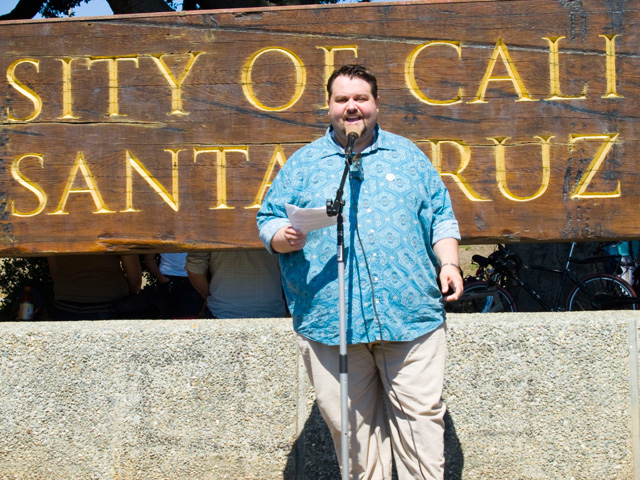 Brian Malone is graduate student at UCSC with the UAW:

Yudof and Kliger say I should be in class now but I'm not. I'm here in solidarity...
Graduate education is being destroyed.
Loans are getting larger.
Graduate fees are going to be up 32% by 2010.

The University tells students to make their work more "relevant" (for corporations to make a profit).

Most teaching in the UC is done by Teaching Assistants (TAs). The TA-to-Student ratios are increasing.

Students are leaving school due to the fee increases.

The bureaucrats at the top know exactly what they are doing as they strike at the heart of public education.
§Hasta la Vista UC
by ~Bradley Thursday Sep 24th, 2009 11:49 PM 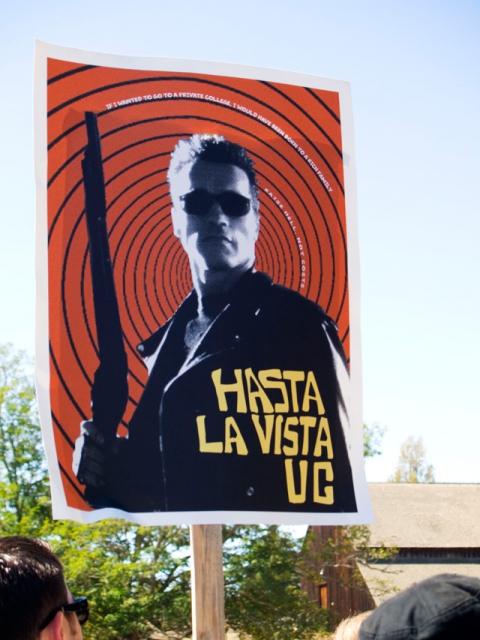 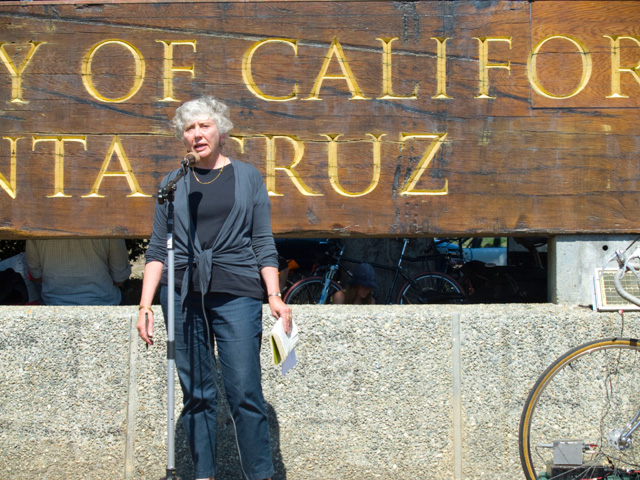 Shelly Errington is a Professor of Anthropology at UCSC and Chair of the U.C. Santa Cruz Faculty Association:
http://en.wikipedia.org/wiki/Shelly_Errington
http://ucscfa.org/

The academic mission of the University is under attack. We came here because we believe in a public affordable education.

Today is an unprecedented event. There are faculty, staff and students united across all UC schools. September 24 is the start of a growing movement to defend the quality of education in California.
§UPTE
by ~Bradley Thursday Sep 24th, 2009 11:49 PM 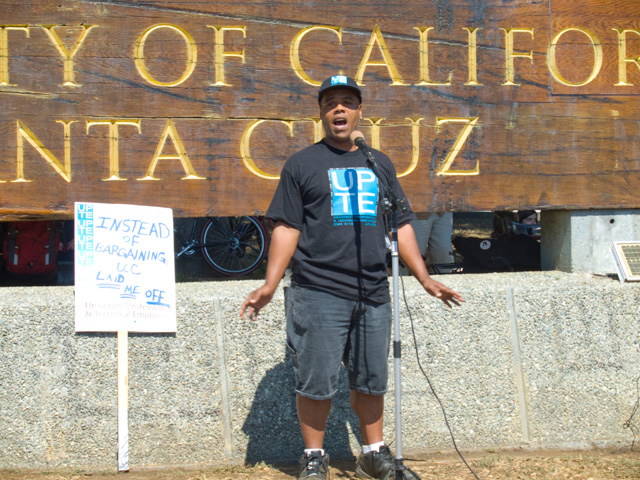 Those at the top don't care about workers and students because they are not a priority. It is time for the Regents to be held accountable. The UC needs to open their financial books. They think that we're stupid.

The UC is very actively engaged in union busting. There has been retaliation against all members of the UPTE bargaining team
§Plutocrat Fat Cat
by ~Bradley Thursday Sep 24th, 2009 11:49 PM 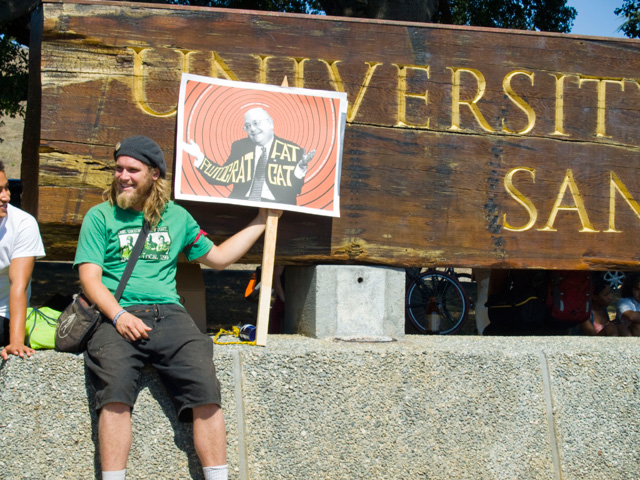 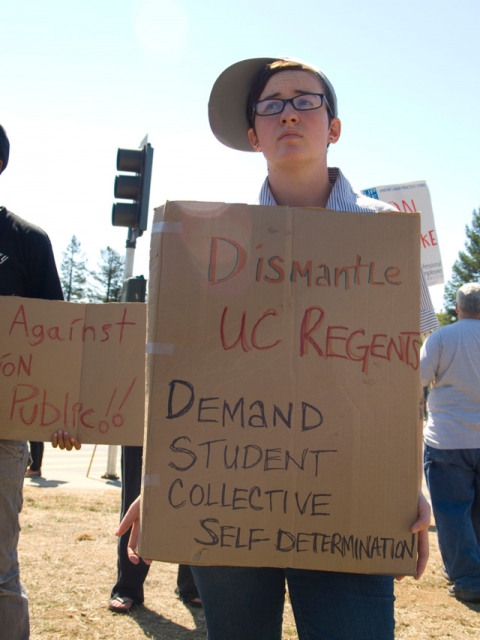 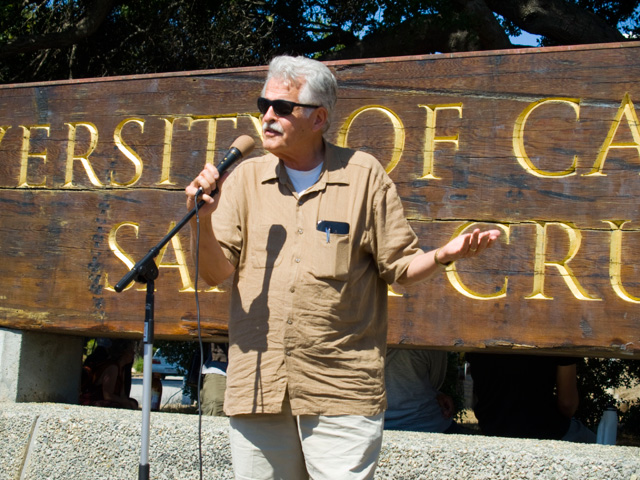 The University would have paid me more if I was more "career minded", with more "visibility" which translates into more books and journal publications.

I have long said, which has upset some of my colleagues, that teaching is my occupation and journal writing is an avocation.

UC has increasingly become more and more like a corporation. They focus on union busting, marketing, and a strict ideology of extremely high wages for top level management.

Mark Yudof was brought in to finish off the job of transforming the UC into a private corporation.
§Josh Sonnenfeld
by ~Bradley Thursday Sep 24th, 2009 11:49 PM 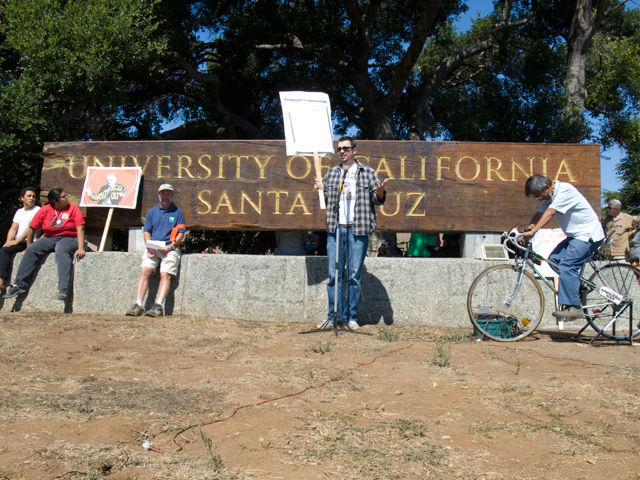 Josh Sonnenfeld held a sign that said Another Alumni Against Privatization:

More than 650 alumni students are going around to UCs today to let students know that we are in support.
§Barry Kirschen
by ~Bradley Thursday Sep 24th, 2009 11:49 PM 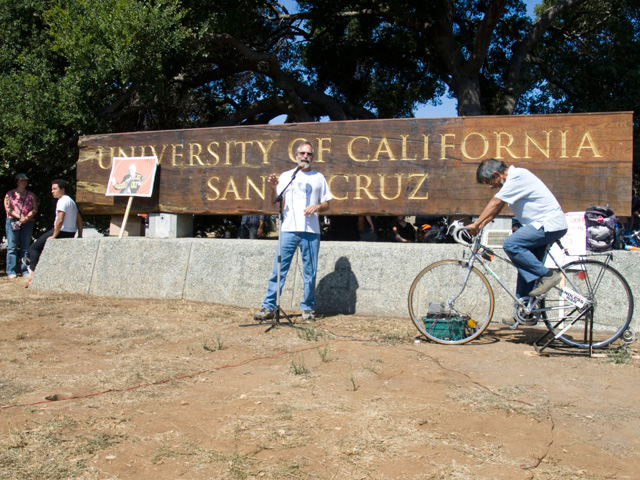 Pink slips were given to many workers, though many of the layoffs were rescinded.
Your struggle is our struggle.
§Cesar Lara
by ~Bradley Thursday Sep 24th, 2009 11:53 PM 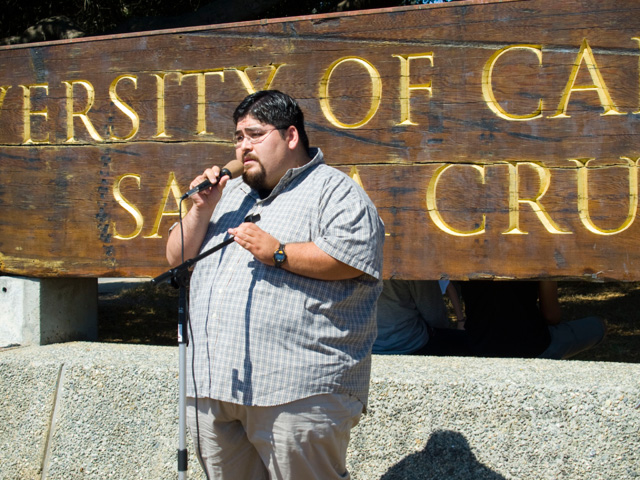 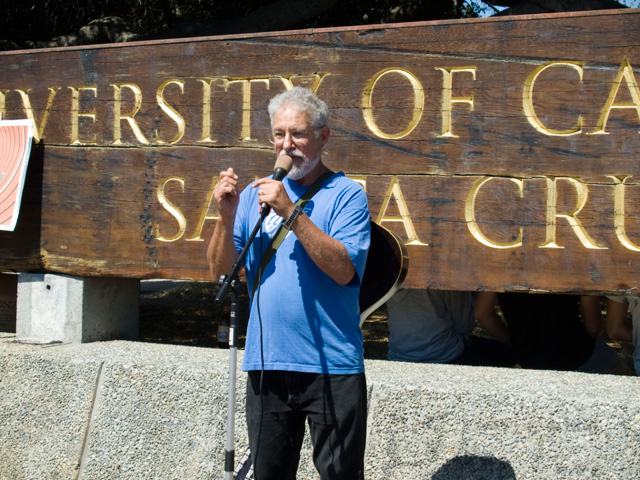 Mike Rotkin received a pink slip, but it was reversed and he says that he is not going anywhere. He has noticed that there is a meme going around campus were many faculty and staff are telling students and others that they should "Go to Sacramento and complain.."
§Taste of Bullshit
by ~Bradley Thursday Sep 24th, 2009 11:58 PM 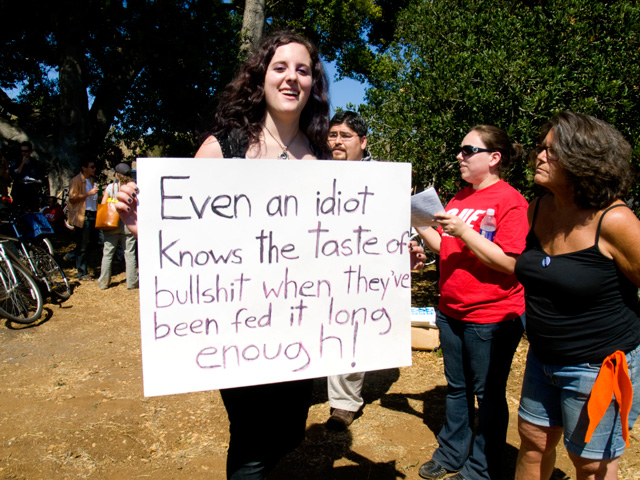 Even an idiot knows the taste of bullshit when they've been fed it long enough!
§Nora Hochman
by ~Bradley Friday Sep 25th, 2009 12:07 AM 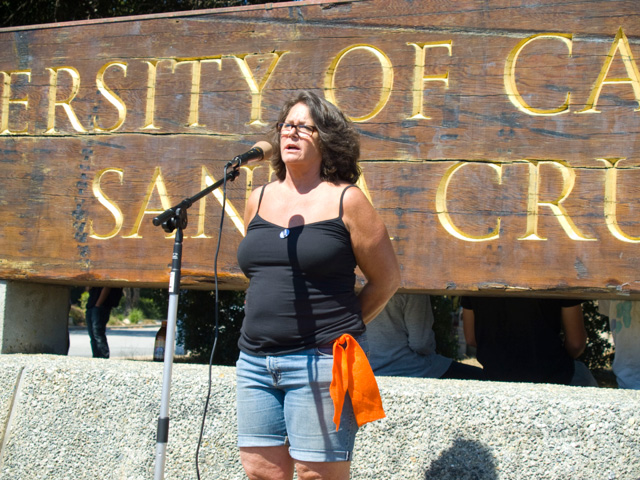 It takes activism. It takes political action. Shit rolls down hill. Activism is the name of the game, and I don't mean voting. Students are the key to the future of higher education
§If You See A Scab Picket
by ~Bradley Friday Sep 25th, 2009 12:13 AM 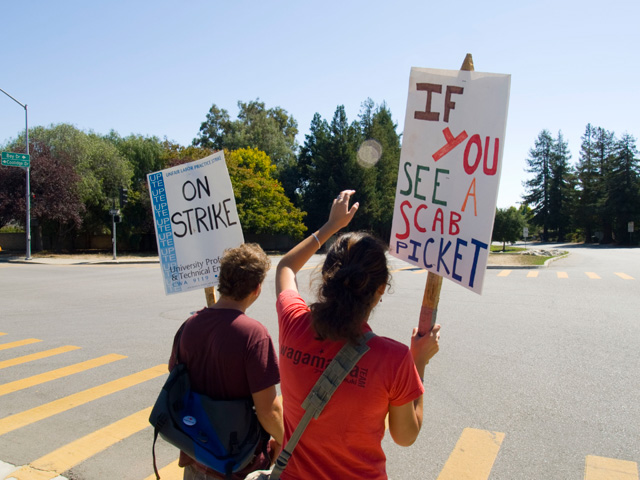 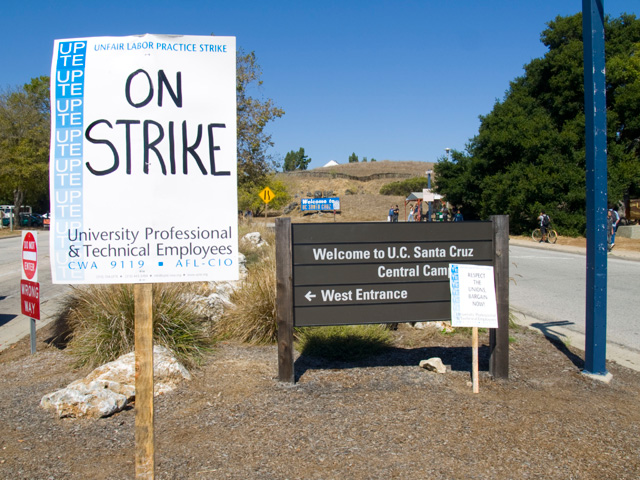 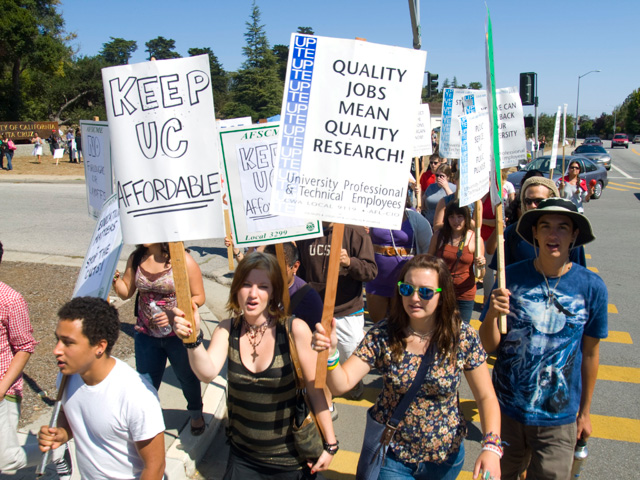 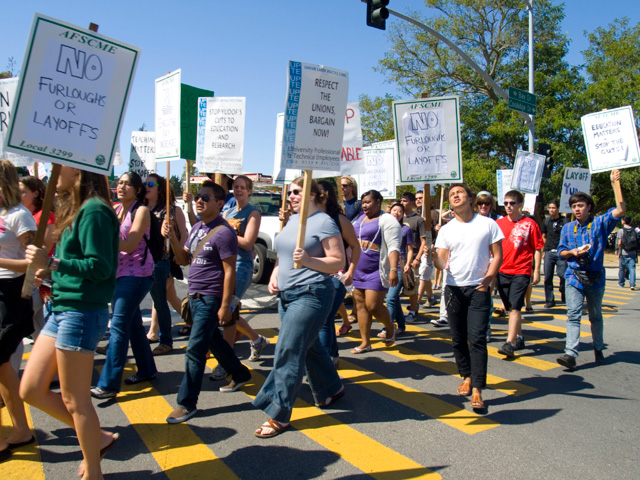 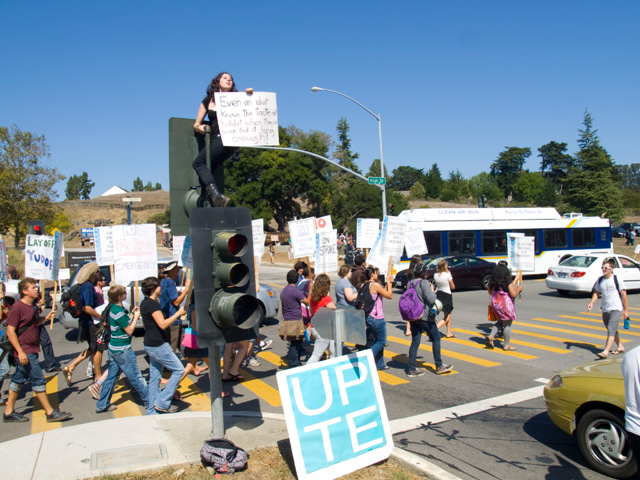