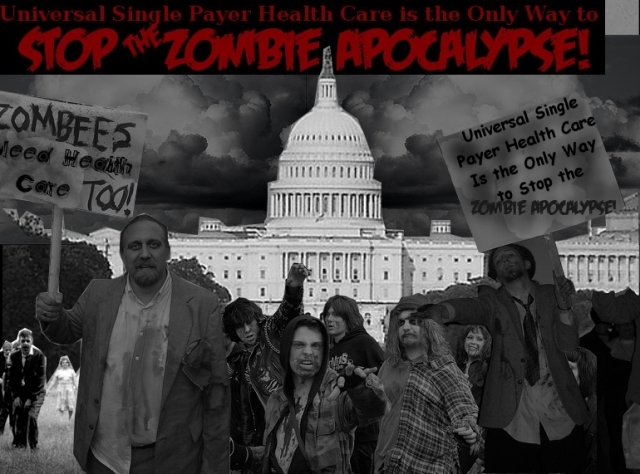 original image (770x571)
The Zombie hordes are upon us. As the undead shamble across our world, devouring humans and spreading their disease, we find the private health insurance companies to be woefully inadequate in preventing the Zombie outbreak from spreading to apocalyptic proportions.

Only a universal single payer health care system would stop the Zombie Apocalypse. Under the private insurance companies, many people who are bitten by Zombies, can not afford to see a doctor who would be able to treat the bite and prevent that person from becoming a Zombie. It seems that the Undead Panels are the Billing Departments of the Insurance Companies, denying care to the poor simply because they can not afford it.

A universal single payer system would guarantee that all are provided medical treatment by creating a national public health insurance, which covers all the needs of everyone. Patients would still have a choice of doctor and hospital, and the cost would be paid by the government.

Many say that this will mean a raise on taxes. Maybe, if you make more than a million dollars a year. A small progressive income tax hike on the richest of the rich, people like Bill Gates, George Soros and Donald Trump, would more than cover the cost of providing health care to all and preventing a Zombie outbreak. Alternatively, the war in Iraq could be ended and the money spent on the war could be redirected towards health care for all. Besides, isn't a small tax raise a small price to pay to prevent

A Zombie epidemic would be tragic, brother would devour brother, society would collapse, and the smell would be horrendous. However all of this can be thwarted if we allow for those who are sick to be able to gain the health care they need, and prevent the spread of such diseases.

That is why we are calling on the victims of the Zombie virus, and the victims of the Health Insurance Industry, to stand up and speak out in support of single payer universal health care. Organize Zombie rallies, picket at Town Hall meetings in full zombie garb, forward this to your friends and organize for equal healthcare for all!

Take pictures and videos and send them to admin [at] stopthezombieapocalypse.com so we can post them on this website!