Add an Event
Newswire
Calendar
Features
Home
Donate
From the Open-Publishing Calendar
From the Open-Publishing Newswire
Indybay Feature
Publish to Newswire
Add an Event
Related Categories: Central Valley | Environment & Forest Defense
Nestle on the Prowl - Poised to Steal Sacramento's Water
by Save Our Water
Wednesday Aug 26th, 2009 12:07 AM
Nestle is planning a move to Sacramento... 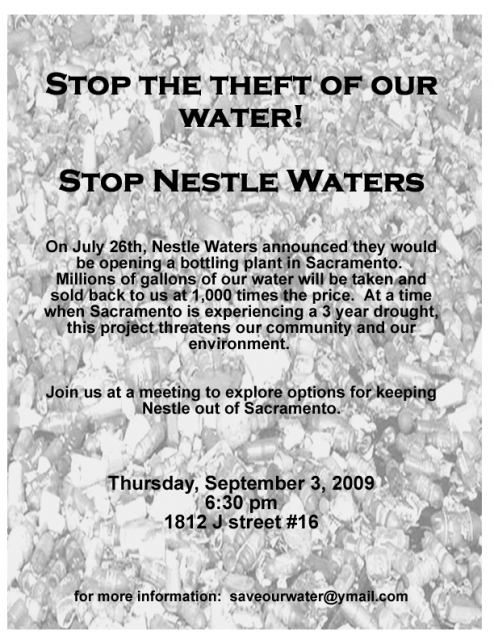 original image (612x792)
On July 26, with a brief back page article, the Sacramento Bee broke the story that Nestle Waters is coming to Sacramento. A glowing article in the Business Journal and a critical article in the News and Review followed, and then the story was mostly forgotten.

Non Discretionary
Since this initial publicity, Nestle and the city of Sacramento have worked hard to quietly fast-track this project so Nestle can open its south Sacramento bottling plant in the next few months. City staff consider this project "non-discretionary," which means if all goes as planned, there will be no public comment, no city council vote and no environmental impact report.

Down the Drain
Nestle claims that their Sacramento plant will be a "micro-bottling plant," bottling only 50 million gallons of water. According to Nestle, approximately 30 million gallons will come from Sacramento's municipal water system and 20 million will be trucked to the plant from nearby "private springs." City staff have refused to answer questions about the springs and Nestle has provided no information about their location, other than telling the Sacramento News and Review that they are in the Sierra Nevada foothills. A search of water extraction permits issued by the State of California over the last two years reveals nothing. The only clues come from other communities struggling to keep from being robbed of their water. In July of 2008 Attorney General Jerry Brown delivered a near fatal blow to Nestle's plans for their massive bottling plant in the small mountain town of McCloud California. That same month, developer Lawrence Adams filed an application to increase the amount of water he could extract from a parcel of land he owns in Shingletown, California. Adams was granted permission to increase the amount he pumps from 26,000 gallons a day to 288,000 gallons a day. Despite requests from Shingletown residents, Adams has refused to disclose who he plans to sell the water to. This foothill town, looted for water in the same month that Nestle's McCloud deal crumbled, is the only site we can locate that could possibly be Nestle's mysterious private spring. If Nestle is Lawrence Adams’ secret customer, then quite possibly the fate of this town’s water depends on whether or not the Sacramento bottling plant is built.

The tactics Nestle is using in Sacramento are a noticeable departure from the methods they have used in other towns from whom they hoped to profit. Unlike many of their past endeavors - where Nestle negotiates backroom deals for access to inordinate amounts of water - in Sacramento there is no agreement to provide a specified amount of water. In fact, there is no agreement at all. If everything goes as planned, Nestle just hooks up to our water system and pumps as much as they want. The only limit on the amount of water Nestle pumps, as I was told by one staff member at the Economic Development Department, is the size of their pipes. The three bottling plants already in Sacramento are among the city's top 20 water users. All three have increased the amount of water they pump in the last two years, one as much as 54 percent. Why would Nestle be any different?

Nestle has fought for the last 6 years, without success, to establish a bottling plant in the town of McCloud, California. While rumors abound that Nestle is abandoning their plans for McCloud, the company has indicated that it all depends on what happens in Sacramento. Before bowing to pressure from the public, courts and the Attorney General, Nestle planned to pump 520 million gallons of spring water a year and unlimited groundwater from the aquifers of McCloud. If Nestle pumps 520 million gallons of water in Sacramento that would make them the city's number one water user (pumping over 200 million gallons more than the runner-up, the Sacramento Power Authority). And why not? Once they are connected no one can control how much water they pump. They have a ten year lease (with an option to extend) on their warehouse space at 8670 Younger Creek Drive. The plant will supposedly be 214,000 square feet, but it is within a 548,000 square foot warehouse (see diagram below). This is considerably bigger than the size of their proposed McCloud plant and presumably would make it easier for them to expand if they increased production.

Marketing the Region
So whose idea was it to allow a notoriously gluttonous corporation unlimited access to our water in the 3rd year of a major drought? The answer is the Sacramento Area Commerce and Trade Organization (SACTO). SACTO is a chamber of commerce type organization that describes itself as "the region's leading marketer." SACTO has claimed responsibility for pimping us out to a greedy robber baron in exchange for the promise of a few jobs and, according to their press release, "we look forward to a strong relationship with them for years to come.” It seems like they are off to a good start.

Clean Industry
Even if Nestle only bottles 50 million gallons of water a year in Sacramento, that would result in the creation of 800 million water bottles annually. It requires over 400,000 barrels of oil to produce that much plastic. The production of that many bottles creates an astronomical amount of non-biodegradable trash - which ends up not only in our landfills, but also in our forests and streams. The diesel required to truck 20 million gallons of water from the "nearby springs" to Sacramento and then truck 800 million bottles across the state is enormous. According to SACTO board chairwoman Jeanne Reaves, "This is exactly the type of light, clean industry SACTO works to attract to this region," yet this is an industry that requires petroleum, plastic and pollution. These are exactly the kinds of issues that the Attorney General brought up in his letter to Nestle demanding that they do an Environmental Impact Report for their project in McCloud. Yet, despite these identical problems, Nestle and the City of Sacramento plan to do no environmental review.

Economic Development
In exchange for the theft of unknown amounts of our water, Nestle claims the bottling plant will provide Sacramento with a mere 40 jobs. This is pretty meager, considering that in Sacramento County over 83,000 people are currently unemployed. More importantly, there are only 12 job openings for Sacramento posted on Nestle's website. In McCloud, independent economic analysis also found Nestle's claims of economic benefit to be fraudulent. Additionally, there is no guarantee that this handful of jobs posted all over the internet will go to people in the area or benefit anyone in Sacramento at all.

In Conclusion
Water bottling is not a clean industry. The resources required to bottle millions of gallons of bottled water would put an unnecessary strain on this whole region and our environment. The number of jobs Nestle will provide in Sacramento is minimal. The whole industry is useless. Nestle will take our tap water and sell it back to us after marking it up over 1,000 times what they paid for it. If Nestle is allowed to build a water bottling plant in Sacramento they can take as much water as they want, for as long as they want, without any limits or accountability. As the
population grows and the drought continues water is becoming more scarce. The water in Sacramento should be for the plants, animals and humans in this region to live on, not for big companies to amass obscene amounts of wealth. If Nestle is allowed to build this plant, we give up even more control of our water for as long as that plant exists.

If you are interested in discussing options for mobilizing against Nestle, join us on Thursday, Sept. 3 at 6:30 pm. The meeting will be held at midtown friends 1812 J Street # 16

Below are some of the sources for this article and information for further research.

News and Review aricle about the Nestle Bottling Plant in Sacramento. http://www.newsreview.com/sacramento/content?oid=1050642

All Bottled Up: Nestle's Pursuit of Community Water
http://www.foodandwaterwatch.org/water/pubs/reports/all-bottled-up 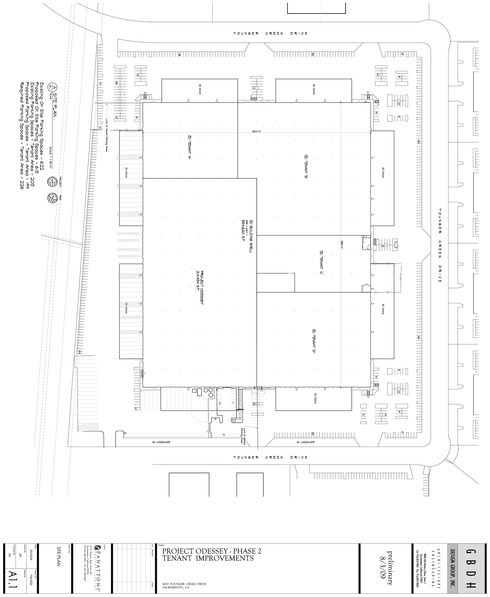 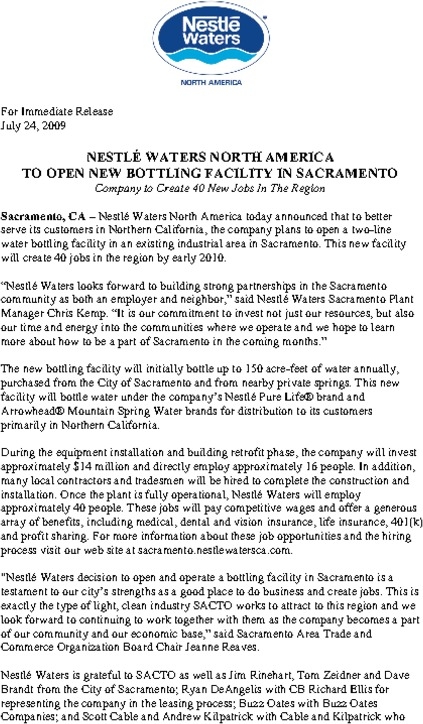 Download PDF (334.4KB)
Add Your Comments
LATEST COMMENTS ABOUT THIS ARTICLE
Listed below are the latest comments about this post.
These comments are submitted anonymously by website visitors.