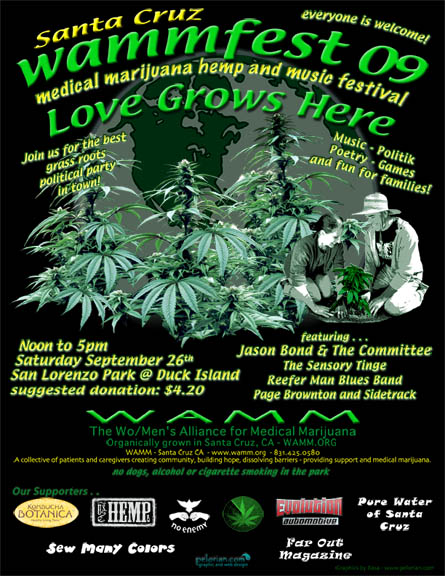 The Wo/Men's Alliance for Medical Marijuana (WAMM) is holding our annual event WAMMfest VI, on Saturday September 26th, 2009 in San Lorenzo Park at Duck Island, in the beautiful Santa Cruz, California, from 12 p.m. to 5 p.m.

Our annual celebration was born in response to the Bush administration’s attack on WAMM’s collective garden in 2002, where 30 armed DEA agents raided the home of WAMM founders, Mike and Valerie Corral. Agents used chainsaws to hack down our collective garden and then arrested Val & Mike.

WAMM crafted a powerful reply. Ten days after the raid WAMM members responded by conducting a WAMM meeting on the steps of City Hall and provided free medical marijuana to 13 of our members. Fortified by the support of our community, WAMM, Santa Cruz City Council and County Board of Supervisors joined in a lawsuit to stop the aggression of the federal government. The raid was intended to be a blow from which WAMM could not recover; instead it prompted us into action. The following year we thought it important to respond. In an attempt to dispel the feelings of loss, anguish and fear brought into the lives of our sick and dying members by government forces we staged our first free community celebration in Santa Cruz, WAMMfest.

WAMMfest is a free celebration offered in gratitude to our community members for years of support & trust. This event commemorates the advance of civil liberties for sick and dying Californians through the struggle medical marijuana legalization.
http://www.wammfest.org
Add Your Comments
Support Independent Media
We are 100% volunteer and depend on your participation to sustain our efforts!