by SF Truth Action
Various activists maintain a presence of peaceful resistance at this year's elitist retreat at the Bohemian Grove.
Bohemian Grove 2009 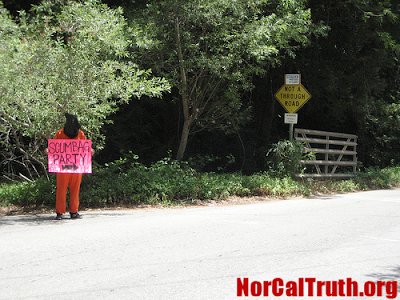 "This years elite retreat at Bohemian Grove is fast approaching. Many of the Grove’s guests will be flying into Santa Rosa Airport on the 10th of July, a Friday. They will travel West towards a small town called Monte Rio via highway 116, or River Road to discuss events and policy in private.

In the spirit of past rallies and protests organized by the Bohemian Grove Action Network, 9/11 Truth and anti-globalization activists will maintain a presence at the Grove. This is the first weekend of the retreat and they will be performing their Cremation of Care ceremony. I must mention that while the elite are here meeting privately, our focus is what the elite do outside the Grove.

Anyone who is interested in joining is welcome. The issue at hand is corporate control of us individually and as a Government. Stand with us against policy makers that come to the Grove to escape and meet in private.

The Press Democrat was kind enough to cover not only the gathering this weekend, but also give a quick shout out to our current protest, as well as the long history of protests maintained by the Mary Moore and the Grove Action Network over the years. That article can be viewed here. 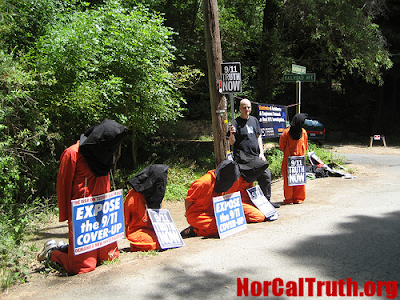 Thanks to everyone who came out and supported the first of two planned protests at the Bohemian Grove, 2009. A couple of people from the Bohemian Grove Action Network came out for the first time in quite a few years to re-activate with us. Nor Cal Truth was joined by activist’s from Marin, Vallejo, and San Francisco.

The police were hardly problematic or overly aggressive, thanks due to a healthy group of peaceful activists. Security was tight as always, and a “few extra highway patrol were on duty due to an early attempt of a break in” said a worker who declined to give his name. A highway patrolman came to say thanks at one point, though he declined to arrest any of the war criminal’s inside. Even more gratifying was the sheriff who came to say “don’t let anyone give you a hard time, if anyone (guest’s) walking or driving through gives you any trouble come let me know, and I will take care of it for you. Because you guys don’t need to deal with that…”

A few middle fingers were given to us by the entering/exiting guests, but surprisingly, more positive support was show for our demonstration. Linking 9/11 with the crimes against humanity known and war and torture created a solemn space with a powerful message outside this secretive facility. Orange jumpsuits were donated from the Bay Area's World Can't Wait chapter and stress positions were held in solidarity with victims of the fraudulent War on Terror. 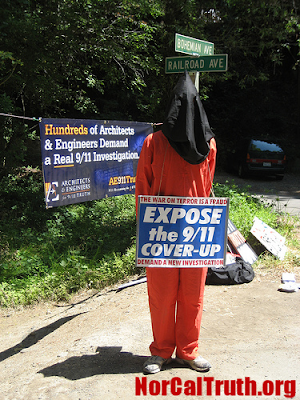 These guys are undecided on their support.


Luckily, we were able to pass out a few fliers and DVDs relating to various topics about 9/11, corporate war-profiteering and creeping fascism in America. Our event also coincided with the ongoing, international Eleventh of Every Month Campaign for 9/11 Truth and Justice. Other members of our group were able to create a presence in downtown San Francisco simultaneous with the Bohemian Grove action, distributing truth materials and engaging with the public in discussion.


Live near the Bay Area? JOIN US:

END_OF_DOCUMENT_TOKEN_TO_BE_REPLACED
Add Your Comments
Support Independent Media
We are 100% volunteer and depend on your participation to sustain our efforts!