Add an Event
Newswire
Calendar
Features
Home
Donate
From the Open-Publishing Calendar
From the Open-Publishing Newswire
Indybay Feature
Publish to Newswire
Add an Event
Related Categories: San Francisco | U.S. | Police State & Prisons
Four charges dropped in SF8 case
by SF8 Defense Committee (freethesf8 [at] riseup.net)
Thursday Jul 9th, 2009 3:20 PM
As the government's case unraveled, charges were finally dropped against four of the SF8 defendants. Richard Brown, Ray Boudreaux, Hank Jones, and Harold Taylor now have no charges in the case. Herman Bell and Jalil Muntaqim agreed to plead to lesser charges. Charges were dropped against Richard O'Neal last year. Only Francisco Torres of NYC still has charges in the case that he and the support committee will continue to fight. 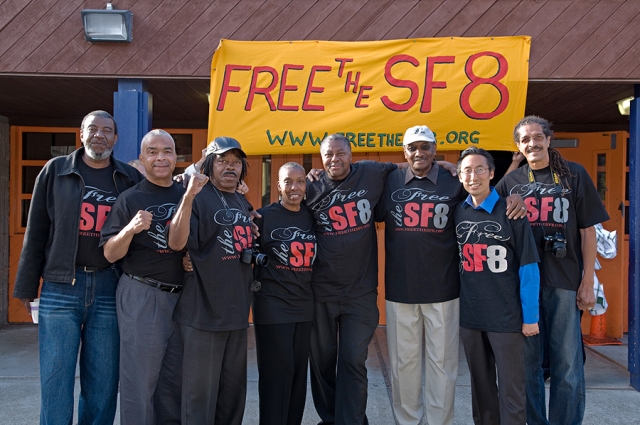 original image (900x598)
Photo: Members of the SF8 and supporters after charges were dropped against four of them. From left, Harold Taylor, Francisco Torres, Richard Brown, lawyer Soffiyah Elijah, Richard O'Neal, Hank Jones, SF Board of Supervisors member Eric Mar, and Ray Boudreaux. Only Francisco Torres still has charges. Not in photo, Jalil Muntaqim and Herman Bell, who will fight for parole in New York on earlier charges.

After 38 years, the governments case against eight former Black Panther Party members and supporters has almost completely unraveled. The eight were arrested January 23, 2007 in California, New York, and Florida on charges related to the 1971 killing of a San Francisco police officer. Similar charges were brought in 1975, but a California judge tossed out the charges, finding that they were based on statements made by three of the men after police in New Orleans tortured them for several days employing electric shock, cattle prods, beatings, sensory deprivation, plastic bags and hot, wet blankets for asphyxiation.

Last week, after Herman Bell agreed to plead to voluntary manslaughter and Jalil Muntaqim agreed to plead to conspiracy to voluntary manslaughter, all charges were dropped against Richard Brown, Hank Jones, Harold Taylor and Ray Boudreaux. Charges were dropped against Richard O'Neal last year. Francisco Torres, of NYC, is the last person still with charges.

Herman Bell and Jalil Muntaqim have been in prison in New York for almost 40 years on similar charges based on the US Government's COINTELPRO actions to disrupt and destroy radical organizations, especially the Black Panther Party. Showing the weakness of the prosecution's case, Bell and Muntaqim were given no additional prison time, and will be returned to NY where they will continue to fight for parole.

Two and a half years of mass support for the Brothers, including resolutions from the San Francisco Central Labor Council, the Berkeley City Council, and several San Francisco Supervisors, have almost broken the back of a vindictive prosecution organized by Homeland Security, the FBI, and California Attorney General Jerry Brown. The defense committee has vowed to keep up the pressure until charges are dropped against Francisco Torres and Herman and Jalil are back on the streets.

What follows are statements on the agreements by Herman Bell, Jalil Muntaqim, and supporter Kiilu Nyasha.

First, I would like to thank all my friends and supporters for their tenacious and tireless work in support of the SF 8, especially the San Francisco 8 Support Committee, Committee in Defense of Human Rights, Asian-Americans for the S.F. 8, Freedom Archives, and many others. I wish to thank the excellent legal team whose unwavering commitment to the task was inspiring. I especially want to thank the lawyers who did the majority of the behind-the-scenes legwork by name: Soffiyah Elijah, Jenny Kang, Julie de Almeida, Heather Hardwick, Rai Sue Sussman, and Lori Flowers. This team of women suffering the testosterone of as many as ten male lead attorneys, plus the eight men accused, truly had their feminist code tested. Naturally, I want to thank the most noted private investigators, Adam Raskin and Nancy Pemberton, whose investigative technique and services were outstanding.

Today we were to start the preliminary hearing but because of our strong legal defense team and growing public support, the California prosecutor offered plea settlements that could not be ignored. The entire group discussed whether I would plead no contest to conspiracy to manslaughter. After some discussion, I reluctantly agreed to take the plea and be sentenced to 3 years probation; 1 year of jail time, credit for time served, concurrent with New York State sentence, dismissing 1st degree murder and conspiracy to commit murder. Also, because of my plea, four other defendants would have all charges dismissed for insufficient evidence. This was a no-brainer especially considering the elder brothers suffered a variety of health issues ranging from high blood pressure, chronic respiratory problems, diabetes, PTSD, and prostate cancer. Although I have my own health issues, in my near 38 years of imprisonment, I believe I am in better shape than all four combined (Ha).

In the last 25 years prior to these charges being lodged, the brothers had been living peaceful and productive lives raising their families, and offering community services. During the period from their release on bail to this date, they had been running themselves ragged across the country telling the story of Cointelpro destruction of the Black Panther Party, the Legacy of Torture, and building support for the case. While I would have liked to have continued the legal fight to what I believe would have resulted in complete exoneration of all charges, I know the jury system is fickle. I have seen too many innocent men in prison who fought with the conviction of being innocent after a reasonable plea bargain was offered, and they ultimately lost due to prosecutorial misconduct, defense attorney errors, improper jury instructions by a judge, and/or a fickle jury. Unfortunately, their loss results in spending decades in prison fighting for a reversal or waiting to be released on parole, or in the worst cases, death row DNA exonerations. The American judicial system is nowhere near being without flaws, as the overwhelming number of Black men in prison sorely attests. Given these circumstances, my taking this plea is a bitter-sweet win-win.

Finally, I would like to thank with profound appreciation my attorneys Daro Inouye, a 30+ year veteran of the San Francisco Public Defender's Office, whose trial experiences and skills are incomparable; and Mark Goldrosen, a remarkable, selfless trial technician and writer whose understanding of both State and Federal law brought the court (and some of the attorneys) to task.

Your strong showing of support at my plea/sentencing hearing this past Monday was truly heartening. For me, removing the possibility of going to trial when a proposal (though unpalatable) is offered that would leave open a future chance at parole in another jurisdiction was something I could not pass up. So I accepted the AG’s proposal. There is no disunity here, just a tactical legal decision having been made. I could never be at peace with myself if I sat in a prison cell for the rest of my days knowing that I rejected a proposal that left open possible freedom one day. You expect me to think and act responsibly and to make responsible decisions. I expect no less of myself or of you.

I am so proud of you and all the work you’ve done in our behalf and in waking our movement from its lethargy proud of your speaking, proud of your fund-raising, proud of your organizing (the Labor Council, the City Supervisors, the Caravan to Sacramento such a sweet piece of “main stream” organizing, and the tribute to Panther women). So very proud that you were in court to smile your greetings whenever we appeared; proud that you made bail for those of us who could bail-out, and that you routinely visited those of us who could not. I shall miss your frequent visits, so how could I not go forward in this without a heavy heart. I do so thanking you for being true to yourselves and thanking you for the love and righteous support you gave and are giving the SF8.

I love you all.


Herman and Jalil are both well aware that there is no justice in the U.S. courts for us -- there's _just us_ as we used to say. Jalil did a great job of making sure all four co-defendants would have their charges dropped before making this decision I know he did not want to make. Nevertheless, I think that we can count this a small, but significant victory, albeit bittersweet without the release of Herman and Jalil; and the continuation of Cisco's case which we expect to win or have the charges dismissed. For those who think this plea bargain is somehow a sell-out -- this is definitely not the case. These brothers still have solidarity with one another and all recognize, as do I, that our fight cannot continue to rely on their system of injustice.

We are ultimately going to have to take it to the streets. In the process of fighting for our global liberation, we must demand the release of our political prisoners and POWs. This was accomplished in South Africa in the 1980's - 90's. However, while S.A. got its political prisoners released, including Nelson Mandela, by letting that struggle become the main goal of the liberation movement, they lost sight of the real prize -- an egalitarian, socialist society that would nationalize the nation's cash cow, the gold/diamond mining industries, to finance universal health care, education, housing, etc.. Now the masses of South Africans are living in worse poverty than ever with no liberation movement and no Mkonto we Sizwe (Spear of the Nation, or military wing). We cannot make the same mistakes over and over again. The very life of the planet is dependent on us. Surely there are enough positive and negative examples of liberation struggles throughout the world -- at this point in history -- for us to be able to learn from their mistakes and successes, their defeats and triumphs.

Power to the people. Free 'em all.


http://www.freethesf8.org
Add Your Comments
Support Independent Media
We are 100% volunteer and depend on your participation to sustain our efforts!