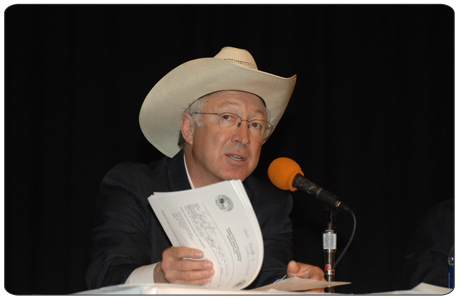 At a packed town hall meeting in Fresno on June 28, Secretary of the Interior Ken Salazar announced steps the Obama Administration is taking in response to agribusiness claims of drought impacts on the San Joaquin Valley, including the distribution of $220 million in Recovery Act funding for water and environmental infrastructure projects in California.

Salazar didn’t outright endorse a peripheral canal and more dams as requested by Valley Congressmen and agribusiness representatives as the solution to their “water supply problems,” nor did he agree to their request to convene the “God Squad” to gut protections for Delta smelt, Chinook salmon, green sturgeon and killer whales mandated under the Endangered Species Act.

“Water supply and infrastructure are options that need to be looked at,” Salazar said. “However, we are are not at a point where we are supporting a peripheral canal or new reservoirs.”

He said that he has appointed Deputy Secretary David J Hayes as the lead official to coordinate federal response to California water supply and related environmental issues with the state and stakeholders, including the peripheral canal and Temperance and Sites Reservoirs.

“I’ve assigned the Deputy Secretary to find those solutions,” said Salazar. "I do expect that there will be a significant water supply component to these efforts.”

He also refused to convene the “God Squad” as requested by Representatives Nunes, Radanovich, Cardoza and Jim Costa, who slammed the ESA and the Delta smelt and salmon biological opinions for putting “fish over people.”

“To convene the God Squad would be admitting failure in the recovery of these species under the ESA," said Salazar. “Where the God Squad has been invoked, it just created more litigation and compounded the problems it sought to address."

He said that the administration must both establish the “certainty” and “reliability” of water supplies and to fulfill the responsibilities for endangered species, unfortunately invoking the "co-equal" goal rhetoric of water supply and ecoystem restoration that led to the current ecosystem crash in the Delta under CalFed.

To the chagrin of recreational and commercial fishermen, Indian Tribes, and environmental justice groups, Salazar, Hayes and Bureau of Reclamation Commissioner Mike Connor said they would continue to work through the controversial Bay Delta Conservation Plan (BDCP) that includes a peripheral canal and more dams.

In fact, Salazar pledged “renewed federal involvement and leadership” in the BDCPand “federal engagement in water supply issues that extend beyond the scope of the BDCP and the immediate geography of the Bay Delta.”

“Significant progress will be made on the most contentious water supply and environmental issues by the end of 2009, including but not limited to the issues raised by the BDCP,” according to Salazar.

Of this amount, $160 million will be directed to the Central Valley Project. Interior will announce an additional $40 million in drought relief funds within the month, the majority of which will go to California’s Central Valley, according to Salazar.

He also pledged the “expedited review” of infrastructure projects that could potentially add "flexibility" to water delivery systems, including the proposed “Two Gates” project and the canal intertie project linking the California Aqueduct and Delta-Mendota Canal.

After Salazar’s opening address, Representatives Cardoza, Nunes, Costa and Radinvoch, in an egregious example of bi-partisan servitude to corporate agribusiness, spoke for around 45 minutes, repeating the "Big Lie" that the San Joaquin Valley economy is being ravaged by court-mandated federal measures to protected endangered Central Valley Chinook salmon and Delta smelt.

They demanded immediate resumption of the pumping and called for Salazar to convene “The God Squad." They also claimed that water exports were not the major factor in fish declines – that invasive species, water pollution and other factors should be also considered in the collapse of endangered species. They called for the immediate overturn of the two biological opinions and asked for new opinions based of “true science”.

“The ESA is not working,” said Jim Costa said, in a curious leap of logic because it was largely because of attacks on ESA protections by Costa and other Valley legislators that Chinook salmon, delta smelt, longfin smelt, green sturgeon, Central Valley steelhead and other species are in their greatest crisis ever. “If the ESA was working, the fish would not now be endangered. We can’t can’t fix the Bay-Delta Estuary by only dealing with water exports.”

Cardoza said the biological opinion amounted to “insanity.” “The bottom line is that we need to turn the pumps back on,” he stated.

“This is not a drought,” claimed Nunes. “It is a regulatory drought.”

All of the members of the so-called stakeholders panel – including the Mayors of Fresno and Mendota, comedian Paul Rodriguez, and Tom Birmingham, general manager of the Westlands Water District - called for the construction of a canal and more dams and reconsultation on the biological opinions. No recreational fishermen, commercial fishermen, Delta farmers and California Indian Tribes such as the Winnemem Wintu, who are severely impacted by increased water exports in recent years and canal plans, were invited to be on the "stakeholders" panel!

Robert Rodriguez, head of the agribusiness-backed “Latino Water Coalition,” tried to make fun of environmentalists' comparison of the Delta smelt to the “canary in the coal mine” as an indicator of the ecoystem’s health.

"The canary is there so it will perish and the miner can live, but these people got it backward," Rodriguez claimed. "They want the fish to live so that everyone can die."

Arturo Rodriguez was the only panel member who didn’t call for the construction of the peripheral canal and more dams or overturning the biological opinions under the ESA. He pointed out the contradiction between agribusiness asking for new water infrastructure when farmworkers are denied clean drinking water in the fields.

“We have no thoughts on the peripheral canal or dams at this time,” Rodriguez said. “We are looking at the plans and proposals to ensure that what is done takes into account the needs of farmworkers, including making sure that farmworkers have sufficient water to drink in the fields. This is more than just ensuring water for agriculture – we want to sure that workers have good jobs with good wages and access to representation.”

Rodriguez noted that 6 farmworkers died last year due to heat. He also emphasized that any water infrastructure plans by the state and federal governments must take into consideration the needs of agriculture, farmworkers and their families, and the environment.


It's Not A Conflict between "Fish and People"

A sizable contingent of recreational anglers, commercial fishermen, Delta farmers, and environmental justice advocates showed up at the meeting to dispel the “Big Lie” of agribusiness - that the battle to save the Delta is one of “fish versus people" when it is really one of family farmers, recreational fishermen, commercial fishermen and California Indian Tribes versus corporate agribusiness. Although none of these groups were represented on the stakeholder’s panel, Salazar called, by random comment card selection, four representatives of these groups up to the podium to talk for three minutes.

“It’s not an issue of fish versus people - there is 100 percent unemployment of commercial salmon fishermen,” said Jane Wagner-Tyack of Restore The Delta. “The BDCP has serious problems in that there are no representatives from the Delta involved. You can’t help this region by destroying another one, the Delta.”

Barbara Barrigan Parrilla, campaign director of Restore the Delta, noted that there are 6,000 recreational fishing jobs on the Delta and that the 500,000 acres of farmland in the Delta, now under threat from increased water exports, contribute $3-1/2 billion annually to the California economy.

Mike Hudson, president of the Small Boat Commercial Fisherman’s Association, did a superb job of talking about the plight of commercial fishermen being unemployed for 2 years because of the collapse of Central Valley Chinook salmon.

He also took aim at the “fish versus people ” claim that has become the mantra of corporate agribusiness. “Whoever says this is about fish versus people is saying I’m not a person!” Hudson said to a round of applause from many in the audience. “Thousands of people depend upon healthy salmon runs on the coast as a way of life.”

Dick Pool, administrator of Water for Fish, discussed the economics of the salmon shutdown and said his organization strongly supports the Delta smelt and salmon biological opinions.

“The issue here is not jobs versus fish, it is jobs versus jobs and food versus food,” emphasized Pool. “Currently there are 23,000 commercial and recreational people unemployed because California’s salmon fishery is shut down. This has taken $1.4 billion out of the State’s economy.”

Contrary to the lies of agribusiness representatives and Valley politicians repeated again and again at the meeting, agribusiness employment actually rose in 6 out of 7 San Joaquin Valley counties from May 2006 to May 2009. During three years of drought between May of 2006 and May of 2009, farm employment went up 13.7% in Kern County, 12.1% in Fresno County, 19.3% in Tulare County, 2% in Merced County, 5.3% in Madera and 8.4% in Stanislaus County, according to official data compiled by the California Economic Development Department. Only in the smallest agricultural county of Kings was there a decline.

"While we’re told that 262,000 acres have been fallowed in Fresno County, the County’s Department of Agriculture was releasing a report that revealed 2008 was another record year with agricultural production dollars up 5.9% over the previous record year of 2007," revealed Bill Jennings, executive director of the California Sportfishing Protection Alliance.

For more about agribusiness lies about the drought and the "impact" on San Joaquin Valley agriculture, please read CSPA's Press Release - Myths, Lies and Damn Lies at http://www.calsport.org/6-28-09.htm


Other Steps Announced by Salazar:

Salazar noted that the Bureau of Reclamation has already taken operational steps to stretch the water supply in the San Joaquin Valley. These include:

• The processing of more than 70 transfers that total approximately 245,000 acre-feet of water for the San Joaquin Valley.

• The approval of rescheduling requests by Westside and Friant Division CVP contractors to allow them to preserve and use prior year allocations of approximately 250,000 acre-feet in San Luis Reservoir and 57,000 acre-feet in Millerton Lake.

• The planned announcement of 2010 rescheduling guidelines by August 1, several months in advance of prior practice.

• The approval of contracts to convey 170,000 acre-feet of non-CVP water through CVP facilities for irrigation in various areas affected by the “drought.”

“The Interior Department will continue these efforts and work closely with California to continue facilitating water transfers between willing sellers and buyers, as well as other efficiency improvements,” said Salazar.