Secretary Salazar to Speak at Town Meeting on Drought in Fresno

by Dan Bacher
The Department of Interior will hold a "town hall meeting on the drought in California" on Sunday, June 28, from 2:30 to 4:00 p.m. at the Fresno State Satellite Student Union, 2485 East San Ramon Avenue in Fresno. 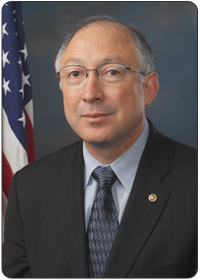 Secretary Salazar to Speak at Town Meeting on Drought in Fresno

Valley Politicians Perpetuate the Myth of "Fish Versus People"

Bowing to pressure from Representatives Jim Costa (D-Fresno) and Dennis Cardoza (D-Merced), the Department of Interior will hold a "town hall meeting on the drought in California" on Sunday, June 28, from 2:30 to 4:00 p.m. at the Fresno State Satellite Student Union, 2485 East San Ramon Avenue in Fresno.

Interior Secretary Ken Salazar is expected to announce new stimulus monies for the Central Valley and talk about the Bay Delta Conservation Plan process. Salazar, Deputy Secretary David J. Hayes and Bureau of Reclamation Commissioner Mike Connor are also expected to field complaints from corporate agribusiness interests that they are not receiving enough water from the Central Valley and California Water Projects.

You can expect San Joaquin Valley agribusiness representatives to blame all of their economic problems, real or imagined, on Delta smelt and the recent NMFS biological opinion to protect Central Valley salmon stocks. You can also be sure that Westlands and other agribusiness interests will put intense pressure upon Salazar and the other Interior officials to support the peripheral canal and dams proposal that Governor Arnold Schwarzenegger and Senator Dianne Feinstein are campaigning for.

Since President Obama took office in January, Congressmen Cardoza and Costa have requested that the incoming Interior Secretary come to the San Joaquin Valley, according to a joint press release from Cardoza and Costa that falsely portrays the battle to restore the California Delta and the thousands of jobs that depend on it as a "fish versus peoples" scenario. They claim that unemployment is the result of a "regulatory drought" caused by relatively modest court-ordered restrictions on pumping to protect Delta smelt and Sacramento River winter run and spring run Chinook salmon.

"The San Joaquin Valley has been especially hard hit by drought in the past few years," their joint release opined. "Additionally, water deliveries to Valley farmers from the San Joaquin Delta have been curtailed by regulators who have placed an undue amount of blame on famers for declines in fish populations to the north."

“The Central Valley simply cannot continue down its current path," claimed Cardoza. "This regulatory drought is destroying our farmers, our families and our local economy. Further, we are facing a genuine risk of having to import additional food to supply our nation. I look forward to providing Secretary Salazar with as much insight as possible about the extreme hardship in our agricultural community and look forward to the assistance that he is capable of providing.”

"The Secretary knows about the hundreds thousands of acres of fallowed fields, the high unemployment and the possibility of a fourth year of drought,” said Costa. “The lack of water has rippled into every facet of our economy. We now have those who normally sow and reap our nation’s food, standing in food lines to feed their own families. As part of this important visit, I will be explaining to the Secretary the need for both short and long term water solutions in California, which include repairing the Delta, improving water supply and quality, and environmental restoration.”

Valley Democrats Cardoza and Costa have formed a de facto unholy alliance with far right Republican Congressmen Devin Nunes and George Radinovich as they bow down before Westlands Water District and corporate agribusiness. While falsely blaming modest regulatory protections for "fish populations to the north" for the Central Valley's problems, Cardoza and Costa neglected to mention the impacts that massive water exports out of the California Delta have had upon the thousands of people that have been employed in the commercial and recreational fishing industries and the coastal and Central Valley communities that depend upon healthy fisheries for their economic health. The closure of recreational and commercial salmon fishing season off California and Oregon this year and in 2008 has had a devastating impact upon coastal communities in both states.

"While they are bitching about fish protections robbing them of water (not true!), the Bureau of Reclamation is preparing now to ship 40,000 acre-feet of Central Valley Project water to Southern California – swimming pools and golf courses," noted Zeke Grader, executive director of the Pacific Coast Federation of Fisherman's Associations.

Cardoza and Costa were two of the 40 Democrats that voted for an amendment to HR 2847, sponsored by Representative Nunes, that would have yanked funding for a court-ordered federal plan to prevent the extinction of Sacramento River spring run and winter run Chinook salmon, Central Valley steelhead, green sturgeon and the southern resident population of killer whales (orcas). The orcas depend heavily on Sacramento River chinook salmon, including the imperiled fall run, as a food source. The odious amendment was defeated in a close vote of 208 ayes to 218 nos in Congress on June 19.

To see an outrageous rant by Devin Nunes falsely blaming the San Joaquin Valley's economic woes on a "three inch minnow," go to this video of the debate in Congress over the Nunes amendment: http://www.c-spanarchives.org/library/includes/templates/library/flash_popup.php?pID=287094-101&clipStart=16632&clipStop=17481

It is crucial that recreational anglers, commercial fishermen, Indian tribal members, Delta family farmers, Delta farmworkers and environmental justice advocates suffering from the devastating impact of increased Delta water exports in recent years show up at the meeting in Fresno to counter the "fish versus people" lies of Valley politicians and corporate agribusiness. After all, what about OUR JOBS?

For more information including the place where the town meeting will be held, contact Kendra Barkoff at (202) 208-6416


The Real Facts about Unemployment in the San Joaquin Valley

Meanwhile, Dr. Mark Rockwell of the Northern California Federation of Flyfishers has compiled revealing data covering unemployment figures in the San Joaquin Valley and around California that counters the Nunes/Costa/Cardoza/Radanovich allegations of a "regulatory drought," the false "people vs. fish" argument that is now being pushed by agribusiness, Central Valley legislators and Governor Arnold Schwarzenegger.

"Is it really 'fish vs. people' as the Governor and Representative Nunes say?" asks Rockwell. "To listen to all of the rhetoric these days you’d think that people are suffering only because a federal judge and the federal wildlife agencies decided to protect fish. Representative Nunes and our Governor are calling it a regulatory drought and families are suffering as a result. Articles in the L.A. Times and many other papers in California have picked up the story without really checking on data available from the state Employment Development Department records."

Here is a link that shows the data pretty clearly: http://www.labormarketinfo.edd.ca.gov/?pageid=133

However, the raw data doesn’t tell the full story unless you dig into it, as Rockwell has done. "So, here are some of the facts from the data that brings some clarity to the issue," said Rockwell. "Make no mistake; unemployment is a problem in Mendota and Fresno County. However, it is a problem in almost all of California’s agricultural counties, and Fresno is by far not the worst. If you take the numbers as given for all counties in California for May 2009, and then look at the 9 previous years as well it is quite revealing."

• For Mendota, the town portrayed as the worst and where the Governor has visited twice to rail against the Endangered Species Act and his claim of regulation caused unemployment, it shows 38.8% unemployment for May 2009.

• For Mendota, the 9 year previous average is 28.1%. Mendota has led Fresno County in unemployment for the past 10 years.

• Of the 18 most agriculture dependent counties in California the average unemployment rate is 15.6% for May 2009. Seven other counties have worse unemployment than Fresno (Imperial, Sutter, Alpine, Colusa, Merced, Yuba and Stanislaus), with the highest in Imperial County in the Southern California desert at 26.8%.

• Six of the seven counties with greater unemployment than Fresno are not heavily affected by the Central Valley Project water cutbacks - and many are able to compensate via groundwater and use cutbacks.

• Lastly, when looking at the 2008 unemployment figures and averages, Fresno County has the eighth highest increase in unemployment (2008 to May 2009), meaning seven other counties have a greater increase in unemployment over the last year than Fresno- Imperial, Colusa, Merced, Sutter, Yuba, Stanislaus and Tulare. Six of these have limited impact from Central Valley Project reductions or are not affected at all by them.

"What this data clearly shows is that unemployment is chronic in Mendota (28.1% average), worsened by the drought, as with all other agriculture dependent counties," disclosed Rockwell. "The owners of the big farms there are certainly not sharing their profits well with the labor community that serves them. There is much to be done to improve their plight, and it should not include disaster relief from the tax payers (as requested by the Governor and our Senators)."

DWR director Lester Snow testified before Congress nearly two months ago, essentially saying if there was no court order to protect fish, there would only be a 5% increase in CVP water to the San Joaquin Valley. "This shortage is drought caused, not regulation caused," noted Rockwell.

"Who really gets left holding the proverbial bag?" questioned Rockwell. "Of course, it is the federal taxpayer and the public trust. It is time agribusiness took more responsibility for the problem and started to work for a solution, not for the drought but to help the farm workers they sometimes employ."

Rockwell's conclusion? "This isn’t 'fish vs. people,', it is 'fish and people.' Both are suffering in this is the third consecutive low water year," said Rockwell.

The irony of this situation is that the same San Joaquin Valley corporate agribusiness interests that are claiming to speak out for farmworkers have kept farmworkers in poverty and misery for many decades. They have ruthlessly suppressed the right of farmworkers to organize, denied them decent housing, refused to provide them with safe and clean drinking water and sprayed fields with dangerous pesticides that sicken their children and threaten their lives. As documented in the books of Carey McWilliams and others, the big growers' grip on power in the Valley was based on a particularly vicious form of "Farm Fascism" that didn't hesitate to employ guns and clubs to suppress farmworkers' rights.

As during the 1930's when "Farm Fascism" reigned supreme in the Valley, corporate agribusiness continues to control the politicians from both the Democratic and Republican parties. Schwarzenegger, Costa, Cardoza, Nunes and Radinovich are doing everything they can to please their masters - corporate agribusiness giants - at great expense to fish, fishermen, family farmers and farmworkers and the California economy.

Note: Rockwell provides an interesting side note regarding subsidies to these farms: In 1978 the taxpayer subsidy to the Federal San Luis Unit of the CVP (which supplies water to the west side San Joaquin) was estimated at $770 million or about $1,540.00 per acre (United States Bureau of Reclamation figures).

Today that value would be about $5,227.00 per acre using the Cost of Living Calculator for 2007. Another interesting fact is that people in Madera, Merced and Fresno Counties received about $132 million in farm subsidies in 2006. People in Trinity County, where the water for the Western San Joaquin Valley comes from, received $585.00 (United States Department of Agriculture figures on the Environmental Working Group’s Website Feb 16, 2009).
Add Your Comments
Support Independent Media
We are 100% volunteer and depend on your participation to sustain our efforts!