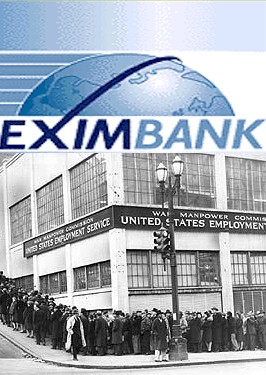 An AIPAC effort on Tuesday seeks to cut off U.S. loans to some American companies doing business with India and Iran. US exports to Iran have boomed in recent years as grain and other foodstuffs find eager buyers.

But AIPAC sponsored amendments to the draft fiscal 2010 State and foreign operations appropriations bill will give members their first chance to vote on binding Iran policy since that country’s presidential election June 12.

Rep. Mark Steven Kirk , R-Ill., said the AIPAC amendment targeted Reliance Industries, a large energy company based in India that reportedly has provided Iran with as much as a third of its refined petroleum. Kirk will offer the measure when the House Appropriations Committee takes up the draft bill on Tuesday. Kirk is the 2008 top recipient of Israel stealth PAC contributions according to the Washington Report on Middle East Affairs. He received $91,200 in the 2008 election cycle and more than $221,000 over his career. A US court is still debating whether to regulate AIPAC as a political action committee after it was shown secretly directing such funding in violation of US campaign finance laws in the 1990s.

“This will be the first vote on a substantive issue with regard to Iran since the election imploded,” Kirk said. Kirk aims to block the U.S. Export-Import Bank (EXIM) from providing loan guarantees to companies supplying gasoline to Iran. Although Iran is a large exporter of unrefined crude oil, it lacks capacity to produce gasoline and imports 40 percent of its gasoline, a situation the Israel lobby has long sought to exploit.

The EXIM encourages firms to buy U.S. goods and services by providing loan guarantees for companies overseas. The Ex-Im has provided Reliance with loan guarantees totaling $900 million, including a half billion to build the world’s sixth-largest refinery in Jamnagar, India. Project equipment, supplies and expertise are source from the US.

Kirk stated the company’s role in exporting a large share of producing to Iran’s refined petroleum makes it an AIPAC target. “We think it would be good for Reliance just to choose not to do business with Iran.”

US firms Bechtel Corp. and Dow Global Technologies are involved in the refinery’s construction and contracting US equipment and services for the venture.

“It struck me as a little strange that we’re going to hamstring American companies in the middle of the worst recession in decades,” said Patrick Disney, legislative director at the National Iranian American Council.

Although the funds for the Jamnagar project have already been disbursed, if the amendment is made retroactive it could apply to the project and other past transactions targeted by AIPAC. Experts say the move would also undermine confidence in the Export-Import Bank (EXIM) and add to US unemployment in high paying fields such as engineering services. The EXIM bank said that the new refinery would not provide gasoline to Iran, but Kirk replied that he thought "nuances like that fall on deaf ears as the situation has come apart in Iran,” he said.

Kirk was frank about the true backers of his plan: “Our amendment is a go because AIPAC supports it.” Kirk referred to the American Israel Public Affairs Committee, a domestically registered lobby created and led by a former employee of the Israeli Ministry of Foreign Affairs Isaiah L. Kenen after its predecessor was forced by the Department of Justice to register as a foreign agent.

Grant Smith, the director of the Institute for Research: Middle Eastern Policy (IRmep) was critical of Kirk's move and the legislation's sponsor. "AIPAC has a history of pushing policies that ultimately harm US workers and the American economy. The flawed US-Israel bilateral trade agreement has cost the US 100,000 jobs per year over the last decade. Other legislative initiatives pushed by the Israel lobby have negatively impacted the US share in the Arab market, which dropped from 12.77% in 1997 to 8.55% in 2008. American workers don't want to become innocent victims of AIPAC's trade and foreign policy adventures."