by Takver - Sydney Indymedia
Scientists and conservationists have called on the Australian Federal Government to urgently protect native forests in South East Australia as a method of locking up carbon for action on Climate Change, with new scientific research showing that the world’s most carbon dense forests are found in cool temperate climates, particularly the central highlands of Victoria. Other notable carbon dense forests are located in the Pacific Coast of North America, Chile and New Zealand. 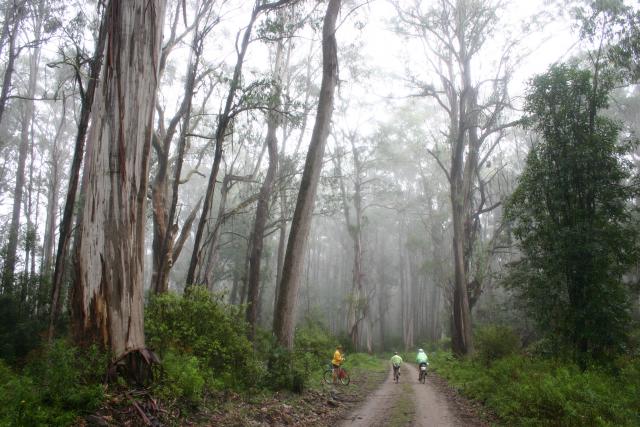 A Scientific Paper published in the US-based 'Proceedings of the National Academy of Sciences' reports that the world’s most carbon dense forest is found in the Central Highlands of Victoria. The reasearch from the Fenner School of Environment and Society at ANU, conducted over 5 years, found that around 9.3 billion tonnes of carbon can be stored in the 14.5 million hectares of natural eucalypt forests in south-east Australia if they are left undisturbed.

The carbon currently stored in the native forests of south east Australia is equivalent to 460 million tonnes of greenhouse gas per year for the next 100 years.

"This research demonstrates how important it is for the federal government to now take seriously the carbon stored in our remaining unlogged native forests," Virginia Young, National Strategic Campaigns Coordinator at The Wilderness Society said.

Ms Young said the government must now assess how much carbon could be stored in Australia’s native forests, how much greenhouse gas could be prevented from entering the atmosphere if they are protected and what their long term ability to keep on pulling carbon dioxide out of the atmosphere is.

"The federal government has made provision for complementary measures to be developed to support the proposed emissions trading system and clearly there is scope to develop a package to reduce emissions and protect and restore the carbon stored in our native forests." she said.

According to the Wilderness Society about half of Australia’s forests have been cleared in the last 220 years and the carbon stocks in more than 50 per cent of the remaining unprotected forests have been degraded by land use activities such as logging.

In the Central Highlands Regional Forest Agreement only 43.84% of rainforest stands in the Central Highlands of Victoria are protected within dedicated reserves. Any rainforest that is not within dedicated reserve is under threat from the impacts of clearfell logging. The majority of rainforest stands are within production forestry areas (ie. logging areas) where inappropriate rainforest buffers are applied, according to the Victorian Rainforst Network.

The Scientific study measured 132 forest around the planet in a five year period and identified that the temperate forests of central Victoria, and in particular the O'Shannassy catchment around the headwaters of the Yarra River, stores twice the amount of carbon as tropical rainforests. The giant mountain ash eucalypts and lush understorey vegetation stores just under 2000 tonnes of carbon a hectare. The study identified that as the trees age, the figure rises, with trees more than 250 years old boosting the carbon sink capacity to just over 2800 tonnes a hectare.

The reasearch paper was written by ANU ecologists Heather Keith, Professor Brendan Mackey and Professor David Lindenmayer. Professor Mackey was reported in the Canberra Times, "It identifies a gap in climate change policy that Australia needs to address. There has been a lot of talk about the need to address tropical deforestation in developing countries, but these results show we must start by recognising the carbon benefits to be gained from protecting our native forests," he said.

Even after the hellish bush fires of February that destroyed Marysville and large areas of native forest, enormous quantities of carbon are still locked up. "If they get an intense fire that kills the tree, you haven’t lost all of the carbon – most of it is in the trunk, branches and roots, and much of it remains after a fire, even as dead wood. Many trees survive fire in less intensely burnt patches, plus new groups of trees regenerate. Over time the total amount of carbon building up can be very large, resulting in a complex forest," said Professor Mackey.

According to Mackey the best way to sequester carbon forests is to protect existing old forests. "If you take one of these mature [mountain ash] forests with 1900 tonnes of carbon in it and trash it … it's going to take hundreds of years to grow back that amount of carbon." he said in an ABC Science report.