Add an Event
Newswire
Calendar
Features
Home
Donate
From the Open-Publishing Calendar
From the Open-Publishing Newswire
Indybay Feature
Publish to Newswire
Add an Event
Related Categories: San Francisco | Womyn
Protest of the Murder of Dr. George Tiller
by Bill Hackwell (hckwll [at] yahoo.com)
Wednesday Jun 3rd, 2009 2:49 PM
An emergency protest was held on the steps of San Francisco City Hall over the murder of Dr. George Tiller who was gunned down by a fascist anti-abortionist in Wichita Kansas on May 31.
The protest was initiated by Radical Women, Linci Comy of the West Coast Feminist Health Project, the ANSWER coalition, World Can't Wait, the Bay Area Coalition for Our Reproductive Rights (BACORR), and Freedom Socialist Party. 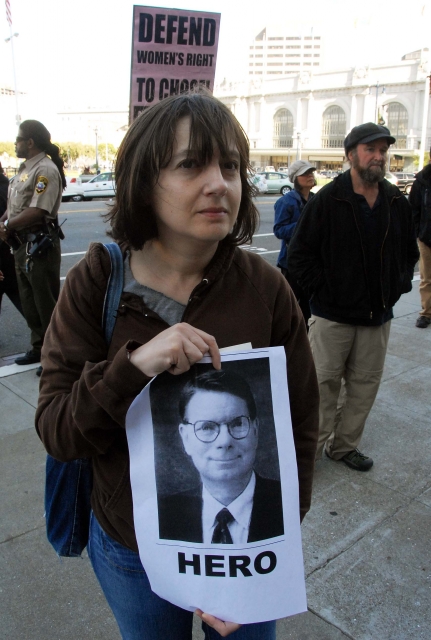 By Mara Verheyden-Hilliard
Attorney and co-founder of the Partnership for Civil Justice
Statement on behalf of the A.N.S.W.E.R. Coalition

The rampant terrorism and violence against women and health care professionals who dare to provide women's health services took its latest victim when Dr. George Tiller was brutally gunned down in his church on Sunday in Wichita, Kansas. The government and the corporate media coddle these anti-women terrorists.

In the last 30 years, right-wing bigots have carried out 5,800 reported acts of violence against women's health care providers, including targeted assassination, bombings, arsons, death threats, kidnappings and assaults, according to NARAL. Hundreds of thousands, and perhaps millions, of women have been assaulted and harassed by the right wing as they tried to see a doctor.

By targeting and intimidating health care providers, the fascist movement hopes to effectively ban abortion services in the United States. If they were to succeed, not only would it deprive women of their fundamental right to control their own bodies, it would be a health care catastrophe. One out of three women in the U.S. have an abortion by the time they are 45, according to Planned Parenthood.

The only question is whether women will be maimed or left to die because they cannot access quality health providers. Dr. Tiller took over his medical practice from his father, a doctor who began performing abortions himself in the 1940s after a patient whom he refused to help died in a back-alley abortion.

Dr. Tiller, like many other health care heroes, kept providing abortion services to women despite the threats. He had been shot previously in both arms; had his office bombed, shot at and frequently vandalized; and he and his patients were routinely threatened, intimidated and attacked.

Dr. Tiller kept providing health care services because, as his family said in a statement, he was “a dedicated servant on behalf of the rights of women everywhere.” He was past retirement age, with four children and 10 grandchildren, and he lived under a virtual military siege because of the terrorist threats. But he didn't stop.

It Wasn't Just the Gunman

This assassination is the culmination of a coordinated assault by the right wing. This included the Kansas Attorney General's efforts to prosecute Tiller, the demonization of Dr. Tiller by Bill O'Reilly, who ran dozens of hit pieces targeting him as a "murderer," and by "Operation Rescue," which prominently called him "America's Doctor of Death."

In the aftermath of the murder, amid reports that the killer had worked with them, Operation Rescue scrambled to take down their prominent "Tiller Watch" webpage, apparently sanitizing it, while their founder continued to call Dr. Tiller a "mass murderer” and held a press conference to do so.

The New York Times coverage of the murder was pathetic. On its front page it stated, "Officials offered little insight into the motive, saying that they believed it was 'the act of an isolated individual' but that they were also looking into 'his history, his family, his associates.'"

The decision to question or suggest uncertainty as to the killer’s "motive" reflects an effort to depoliticize and isolate this most violent of political acts and to disconnect the killing from right-wing groups who seek as their goal to deprive women of their rights using assassination as they see fit. Some right-wing groups and leaders have been quick to announce that the killing was not a homicide, but a justifiable act of "salvation."

The mass media has leapt to the defense of many anti-woman, right-wing groups who directly targeted Dr. Tiller by giving their spokespeople more time in the wake of Dr. Tiller's death to express their primary grievance with his murder -- that it might make them look bad.

In recent months, Dr. Tiller reported to the FBI that the threats were increasing.

Obviously, stopping real terrorism is not a "priority" for the FBI, which has allocated limitless resources to infiltrate and sabotage lawful political organizing all over the country. The FBI and police have disrupted and spied on progressive organizations that built a powerful anti-war movement in the last years. They have paid agents provocateur to infiltrate and frame up organizations and individuals engaged in dissent.

Nor is any mosque or Muslim community center safe from FBI infiltration and disruption activities. From Southern California to upstate New York, undercover FBI agents are trying to entrap Muslim youth into "terrorist" plots that emanate from the FBI itself.

The U.S. government's use of the terrorist label is used to frame up and imprison Muslims in the United States. Just last week in Dallas, representatives of the Holy Land Foundation (HLF) were sentenced to as much as 65 years in prison for the “terrorist” crime of raising money for desperately needed humanitarian relief. HLF had been the largest Muslim charity in the U.S. The charity's "crime" was that the humanitarian relief was going to those starving and dying in Gaza and elsewhere in Palestine. The U.S. government has determined that it is an act of terrorism to get medicine to hospitals and food to children when U.S. foreign policy supports the strangulation of a civilian population for geostrategic reasons.

When Anthrax Threats Were No Big Deal

Yet, when it comes to the right-wing organizations that engage in violence and threats, the FBI and the corporate media are conspicuously mute.

For instance, shortly after the September 11 attacks, letters containing anthrax were sent to media and Senate offices. Hundreds of anthrax threats were also sent to reproductive health clinics, according to the website of NARAL, which states: "Between October 15 and 23, 2001, more than 250 abortion and family planning clinics in 17 states and the District of Columbia received letters purporting to contain anthrax. In each instance, a powdery substance was accompanied by a letter stating, 'You have been exposed to anthrax. We are going to kill all of you.' An additional 270 letters were sent to clinics during the first week of November."

Very few people know about this kind of extreme terrorist intimidation. Can you imagine the reaction of the FBI and the media if anti-war organizers or Arab Americans were linked to anthrax threat letters? There would be screaming headlines and nationwide police sweeps.

But in 2007, in Washington, D.C., when a man showed up at an immigrant rights rally, covertly carrying a map of the demonstration area with sight lines drawn on it, with a cache of weapons including a converted fully automatic M1-Carbine and apparent plans to massacre participants, you probably never heard about it. Why? Because the man, Tyler Froatz, was a right-wing vigilante bent on attacking immigrants and their supporters.

Froatz, who organized with the Free Republic and acted as a spokesman for the Minuteman, stalked a May Day demonstration in 2007. He was arrested after he was confronted by a courageous young woman working as an organizer with the ANSWER Coalition. She was then assaulted by him when she objected to the racist signs he was posting depicting the graphic slaughter of immigrants, including pregnant women and children.

In addition to the weapons Froatz brought with him, in his apartment was found a large arsenal of rifles, handguns, ammunition, a Molotov cocktail, a hand grenade and a 100,000-volt taser gun.

So is Froatz in the special terrorist prisons in Terre Haute or Marion? No. He was released to the custody of his parents in Connecticut and thereafter allowed to plead to a minor weapons charge. The U.S. Attorney’s Office never charged him with any terrorism-related offense or hate-crimes offense. And today, members of Froatz’s group, the Free Republic, celebrated this latest cold-blooded terrorist murder of Dr. Tiller in their postings.

More than Bullet-Proof Vests and Federal Marshals:
A New Strategy is Needed

The murder of Dr. Tiller is a misogynist attack against all women. It is also the foreseeable outcome of a climate of bigotry and vilification fostered by the right wing, normalized by the media and the U.S. government.

A political calculus has been made by the government as to what will be deemed terrorism: what political acts will be crushed and what political violence will be supported or tolerated. As it stands, there is no mobilized effective counter to this fascist violence and the threat that it poses. It’s time for a new strategy and a new challenge. There must be a multi-faceted mobilization of women themselves and of all those men who stand with us against anti-woman bigotry. 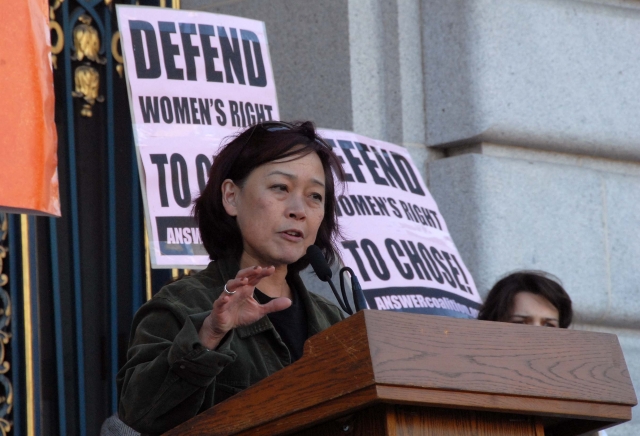 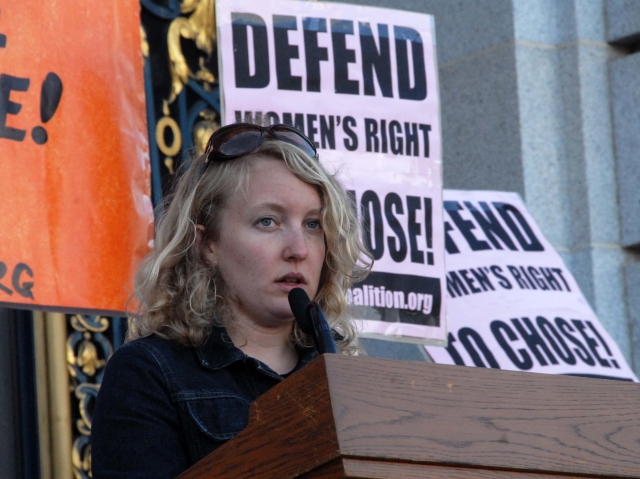 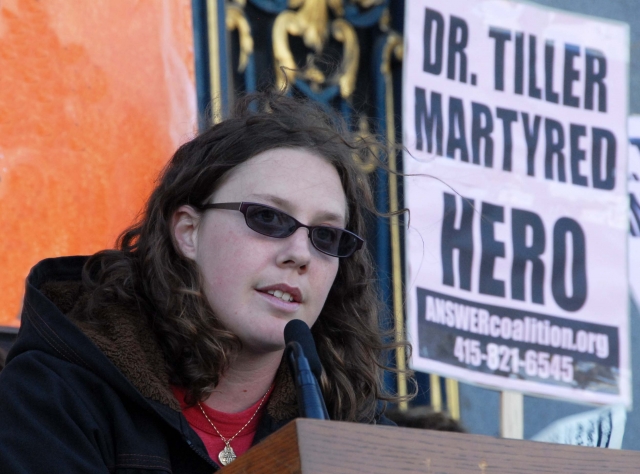 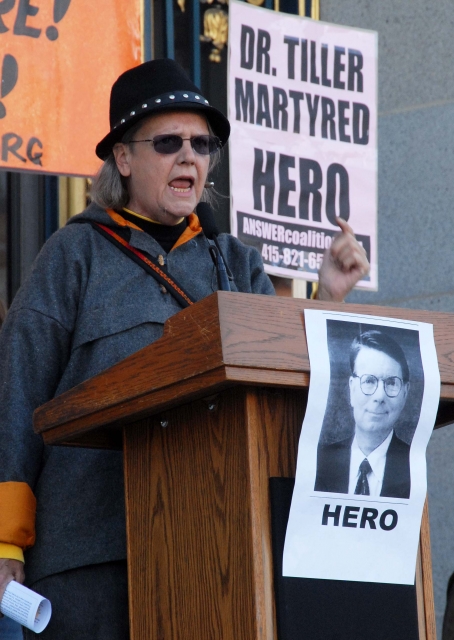 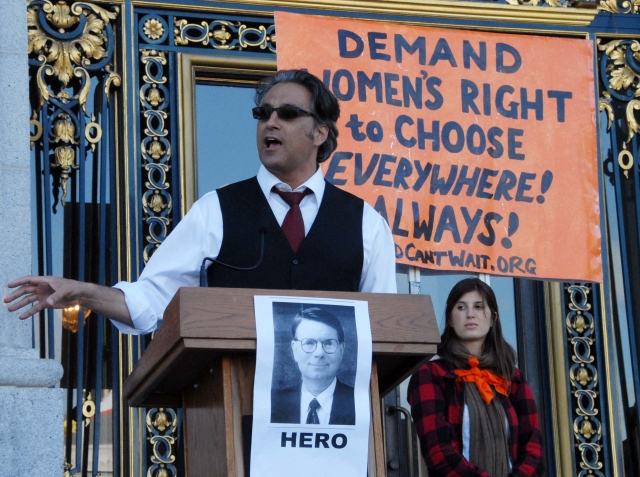 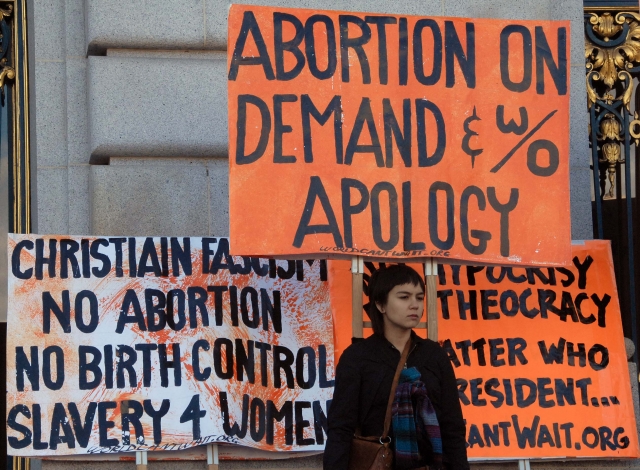 original image (2596x1908)
Add Your Comments
LATEST COMMENTS ABOUT THIS ARTICLE
Listed below are the latest comments about this post.
These comments are submitted anonymously by website visitors.