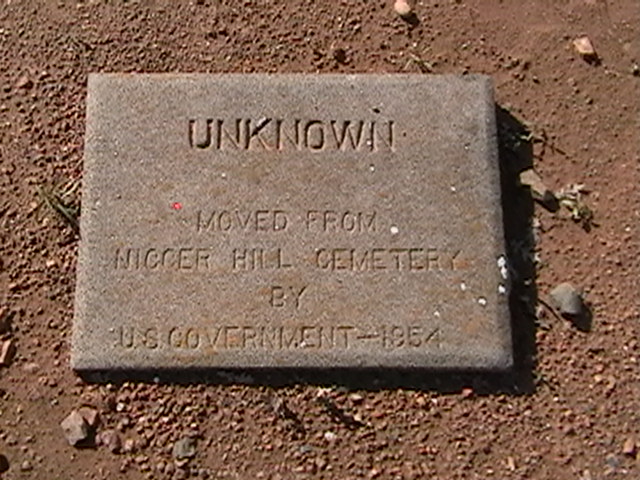 Preparations for several Sacramento Valley Juneteenth Celebrations will discuss slavery in California and the Journey to Freedom by early California Black Pioneers. 1820 - 1865 California's transition from Spanish Territory, Mexican Republic and U.S. Statehood story is the legacy of the "Unknown Gravemarkers" and our Negro Hills Burial Ground Project.

The time for change is now.

Activist Seeks to Bury for Good Act of Racism Festering in Foothills
Posted on: Saturday, 18 February 2006

Like many of those buried at Mormon Island Relocation Cemetery, the three-dozen descendants of Negro Hill lie in graves marked "unknown." But unlike the rest, their simple gravestones bear an inscription, including a racial epithet, that recall the days of segregation, lynchings and other degradations of African Americans.

The racist grave markers roil the blood of Ray Parr, an African American veteran of the Korean War. The 76-year-old Parr said he was angry, recalling the first time he saw the markers, which read: "Unknown. Moved from (racial epithet) Hill by U.S. Government 1954.""What shook me up is that the U.S. government did this," Parr said. "It never should have been done that way." If Parr, and others involved in the Negro Hill Burial Ground Project, have their way, the cemetery's historical markers will be changed "to reflect proper dignity and respect for the pioneers of Negro Hill and the surrounding pioneer communities," said Michael Harris, project director.

Harris is mustering support for the project during the eighth annual California Black History Month. On Feb. 25 a reception honoring black pioneers will be held from 5 to 7 p.m. at the Folsom History Museum, 823 Sutter St. Like most people in Sacramento, Harris knew little about the Mormon Island Relocation Cemetery until Sue Silver, president of the El Dorado County Pioneer Cemeteries Commission, gave him a tour. "I didn't understand the significance of the cemetery," said Harris, a student of African American history and culture.

Operated by El Dorado County since the mid-'50s, the cemetery is tucked away on a dead end street along the Folsom/El Dorado Hills border. It was created by the Army Corps of Engineers as a repository for eight small burial grounds inundated in the 1950s after the construction of Folsom Dam. Among those relocated to the 5-acre site were descendants of former gold mining communities such as Mormon Island, Condemned Bar, Salmon Falls and Negro Hill.

Harris said Negro Hill was founded in 1848 along the American River, east of Leidesdorff Ranch, near today's city of Folsom. By 1853, Harris said, a multiethnic community of over 1,200 people lived in Negro Hill, bolstered by an influx of free people of African ancestry to California. However, by 1854, Harris said, portions of the community had deteriorated and state laws prohibiting blacks from public education, voting, testifying in court and homesteading land helped to destroy Negro Hill's early promise. Eventually, Harris said, residents left Negro Hill for more hospitable environs as far away as British Columbia.

The physical remains of Negro Hill and neighboring communities now lie at the bottom of Folsom Lake. The burial project, of which Harris is director, seeks answers to questions including: What were the origins of the individuals buried in Negro Hill Cemetery, what was the quality of life in the surrounding Negro Hill community, and how did "Negro" in the pioneer town's name change to a racial epithet.

Harris attributes the renaming of Negro Hill on the gravestones to the racial bigotry of the Jim Crow era. "These were good old boys from the South," he said of federal officials who oversaw the reburials at Mormon Island Relocation Cemetery in the 1950s. Steve Beck, archivist at Sutter's Fort State Historic Park, said he doesn't know how the decision was made to inscribe the markers, but he said "historically the community was referred to as Negro Hill."

In reading through back issues of the Folsom Telegraph newspaper, Silver, state coordinator of California Saving Graves, said the community was always referred to as Negro Hill, "until about the 1920s or so.""The federal government only used what the locals called it at the time when they put those markers on the relocated graves," Silver wrote in an e-mail. Regarding the origins of the markers, an Army Corps of Engineers official referred questions to Melinda Peak, an El Dorado Hills historian and archaeologist who has done consulting work for the agency. Peak said many California place name books, such as Erwin Gudde's "California Gold Camps," refer to the pioneer community under both names. However, Peak said a 1944 U.S. Geological Survey topographical map refers to the community by the racial epithet and is likely the reference source used by the Corps of Engineers.

Barely three years after the grave markers were installed, a ceremony was held to dedicate state historical markers commemorating the pioneer towns of "Mormon Island, Negro Hill, Salmon Falls and Condemned Bar." The marker dedicated to Negro Hill has since disappeared. Beck said he is supportive of Harris' goal to raise awareness of the role African Americans played in the state's early history. "I think it's important that people recognize the fact there were people of African American ancestry in large numbers," he said.

P.J. Patton, a cemetery expert with El Dorado County, said that if someone came to the county with a proposal to change the grave marker inscriptions to Negro Hill, "I don't see why we wouldn't entertain it." Among those working with Harris on the burial project is Oshmin Oden, a Bay Area funeral arranger. Oden said he first became aware of the burial marker inscriptions while looking through a U.S. cemetery guide. "I was just shocked," said Oden, who is helping lobby state legislators and other citizens to support the Negro Hill Burial Ground Project.

Oden said that if the state of Georgia can change its flag, removing the Confederate battle emblem, there's no reason California can't change the burial markers. Like Harris, Oden also wants to see a memorial built at the relocation cemetery honoring all of those with grave markers inscribed "unknown.""All people, not just blacks, should know everyone who contributed to this wonderful state," he said.