Add an Event
Newswire
Calendar
Features
Home
Donate
From the Open-Publishing Calendar
From the Open-Publishing Newswire
Indybay Feature
Publish to Newswire
Add an Event
Related Categories: San Francisco | Government & Elections | LGBTI / Queer
Civil Disobedience Planned for D-Day this Tuesday
by Be On the Streets
Friday May 22nd, 2009 11:10 AM
There will be a meeting from 7-9 p.m. on the evening before Decision Day to talk about civil disobedience, in the event that the Supreme Court upholds Prop 8. It will be at a to-be-disclosed location South of Market.

For location of meeting and to get involved email: action [at] onestruggleonefight.com. 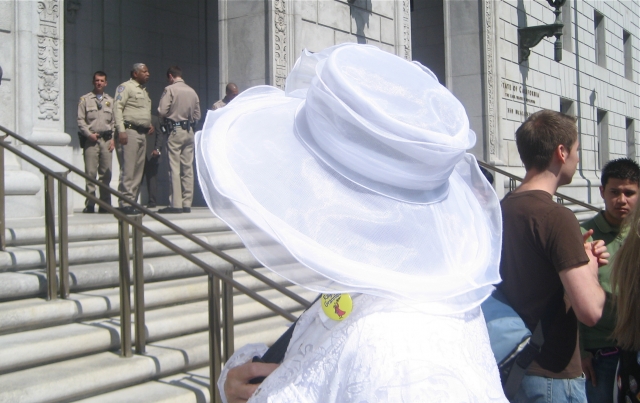 While all are hoping for a victory, preparations are underway for civil disobedience in San Francisco in the event that the California Supreme Court upholds prop 8. 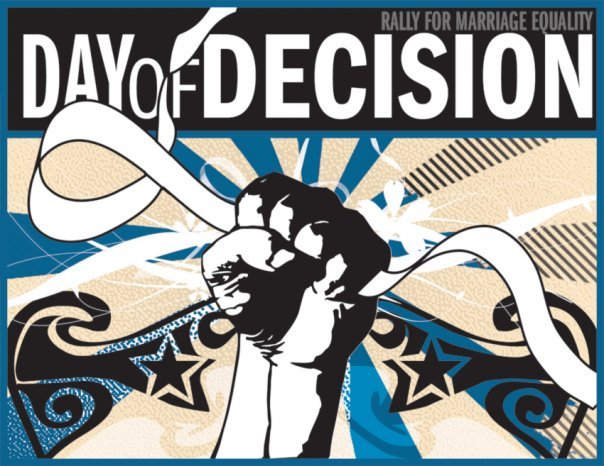 “During their campaign, the Yes-on-8 people hit us with a sledgehammer and our side hit back with a slingshot. The time for candlelight vigils is over.”

California marriage case plaintiff Robin Tyler to http://www.wowowow.com (The Women on the Web), March 11.
http://www.dayofdecision.com
Add a Comment
§The Degree to Which you Resist is the Degree to Which You Are Free!
by David McElhatton (repost)
Friday May 22nd, 2009 12:18 PM 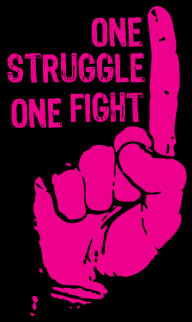 It’s easy for many queer people to shrug off the idea of civil disobedience. We’re used to defeat and we’re used to accepting it. We’ve learned to stuff our anger down our throats because of the enormous risk that comes with shouting it from the rooftops. Civil disobedience has been called naïve by those who have turned cynical by the lack of progress made after years of struggle. It has been called reckless by those who believe the path to full equality is good behavior. There are those who believe that at the end of the day civil disobedience won’t really change anything, so why bother?

It’s true; Civil disobedience isn’t going to change the minds of the Supreme Court justices or convince the bigots to join PFLAG.

It’s going to change us. It’s going to change the way we feel about ourselves, our place in the world, and our value as human beings. I know this because when I found out that fifteen people had been arrested for blocking an on-ramp during the November 15th protests it changed how I felt about being queer. I had never seen us fight back before.

The first queer person I knew was a Mormon lesbian who committed suicide. I was eleven. By that point, I knew about Matthew Shepard. At thirteen I saw Boys Don’t Cry in which Brandon Teena, a transman (finally, someone like me!), was gang raped and murdered.

These things are real. These things are things that have happened to me, to my friends, to my community. It’s on the news, it’s in t he paper. But these are not the only stories that will be told about us, not anymore. We are utilizing nonviolent direct action, the same methods that have led countless movements for social justice and civil rights. We are fighting back with our bodies and our hearts, the only weapons that have ever truly mattered

“The problem lies not in evil personalities or traitorous acts, but rather in the political orientation which believes that an oppressed group gets what it needs by being careful not to offend the powerful. The problem lies in the desire to protect the little we have gotten by not risking a fight for what we deserve. The problem lies in believing that what we have gotten is somehow a favor given by politicians rather than the politicians’ recognition of what we have the political power to get.”
http://onestruggleonefight.com/blog/?p=299
Add a Comment
§It's TIME.
by militant anti-fascist
Saturday May 23rd, 2009 9:11 AM
It's time to BASH BACK!
Add a Comment
§We can thank the 14 million Cal adults who did not vote in Nov 2008.
by $
Sunday May 24th, 2009 3:57 PM
We would not be in this situation, waiting for a Republican dominated California Supreme Court, to figure out the realities of the 21st Century, if the 14 million people who stayed home in November 2008 had actually voted, AND WE KNOW THAT A LARGE PERCENTAGE OF THOSE 14 MILLION NON-VOTERS WERE UNDER THE AGE OF 30, as always. There are 27 million adults in California, of whom about 13 million voted in November 2008 in California. The totals are here:
http://www.sos.ca.gov/elections/sov/2008_general/57_65_ballot_measures.pdf

We see lots of young people getting excited about these court decisions, but not voting. Only 18% of those ages 18-34 are likely voters. The gay rights issue is a generational issue, primarily, with younger voters who have witnessed gay pride marches all their lives usually for gay marriage. Other factors do exist, but that is the decisive issue. Voters over age 50 (about 50%), can easily remember a time when it was unthinkable to be open about being gay, and the concept of gay marriage simply did not exist. The age problem, combined with belief in supersitition aka religion, with the Catholic Church being a much bigger anti-gay institution than the Mormon Church, makes gay marriage an uphill battle. And before anyone blames non-whites for the passage of Proposition 8, remember 70% OF THE VOTERS ARE WHITE in California, while about 40% of the state's population are white, non-Hispanic, European descent. For more on who votes in California, see
http://www.ppic.org/content/pubs/jtf/JTF_LikelyVotersJTF.pdf

In a time of economic crisis, civil rights issues are in big trouble. If we have to campaign for the repeal of Prop 8 in the November 2010 election, we need to see a massive effort to have every eligible adult under age 35 voting in that election. All we needed was 700,000 votes more to defeat Prop 8, and that could have and should have come from Los Angeles County, which was 49.9% No on 8. WE MUST HAVE LOS ANGELES COUNTY CLEARLY WITH US TO PREVAIL ON ALL ISSUES.

Lots of us, including this writer, gave money and time to the No on 8 campaign because we knew it was not just about gay marriage; it was about establishing a fascist base in California, which is always done with these smokescreen issues. The fascist base is 7.8 million votes now in California. Remember, you do not have to vote on everything on the ballot, and if you do not like the candidates, at least vote on the propositions. All of you who are not registered to vote and are concerned about these issues, REGISTER TO VOTE NOW. If you do not like the parties, register Decline to State; you can stlil vote for candidates in the November general elections. The November 2010 election is the governor's race and if the Supreme Court does not repeal Prop 8, the repeal will certainly be on the November 2010 ballot. Call your County Registrar or go there. To find them, look in your phone book or at:
http://www.sos.ca.gov/elections/elections_d.htm
http://www.sos.ca.gov/elections/elections_...
Add a Comment
§Case Names to Look for at 10 a.m. on May 26, 2009
by $
Tuesday May 26th, 2009 7:31 AM
As the Court's May 22, 2009 press release at
http://www.courtinfo.ca.gov/presscenter/newsreleases/MA21-09.PDF
states, the Opinions to look for that are the Prop 8 cases at:
http://www.courtinfo.ca.gov/opinions/
are:
Strauss v. Horton, S168047
Tyler v. State of California, 168066
City & County of San Francisco v. Horton, S168078
http://www.courtinfo.ca.gov/presscenter/ne...
Add a Comment
Support Independent Media
We are 100% volunteer and depend on your participation to sustain our efforts!