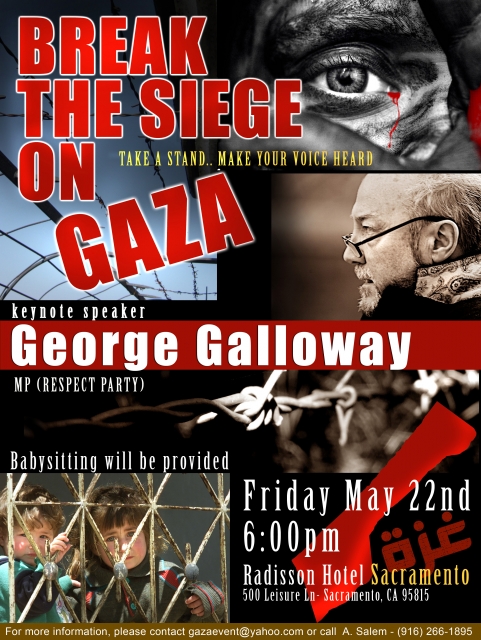 SACRAMENTO – George Galloway – a member of the British Parliament (MP) and
outspoken and controversial critic of U.S. foreign policy in Iraq and the
Middle East – will make a special appearance here Friday.

He will hold a major news conference at the Federal Courthouse (501 I St.)
FRIDAY at 11 a.m. He flies into International Airport earlier Friday.

Galloway – whose testimony before Congress about the war has been hailed as
the "best testimony of the 21st Century" – is the keynote speaker Friday
night at a "Break the Siege of Gaza" community event at the Radisson Hotel,
500 Leisure Lane, at 6 p.m.

Galloway has recently returned from Gaza after leading a convoy of medical
air and humanitarian assistance to the region.

Here's the announcement and flyer for the event:

BRITISH MP TO SPEAK OUT ON GAZA,
WAR FRIDAY AT THE RADISSON

A very, very dynamic speaker against the war in Iraq, and other atrocities in the Middle East - George Galloway (a member of the British Parliament (MP) and long time peace activist - will be the keynote speaker on Friday May 22nd at 6 p.m. at a “Break the Siege on Gaza” community event at the Radisson Hotel, 500 Leisure Lane (near Cal Expo).

He is (google his name) the critic who took on Congress so handily in its hearings a few years ago.

Although the war on Gaza has ended, the residents of this region continue to suffer the aftermaths of the war and the ongoing siege. I

George Galloway has recently returned from Gaza after leading a convoy of medical aid and humanitarian assistance to the region, and will share with us his experience and reflections. We hope that you will join us to be further inspired to take action and stand for justice.

It's sponsored by the Masjid Annur Islamic Center.