A badge is not a license to murder: Make sure the murderer Mehserle is charged with murder

by SFBayView (repost)
Only an independent, youth-led civil rights movement in Oakland, Berkeley and across California can win justice for Oscar Grant, the man who was shot and killed by BART police officer Johannes Mehserle on New Year’s Day. 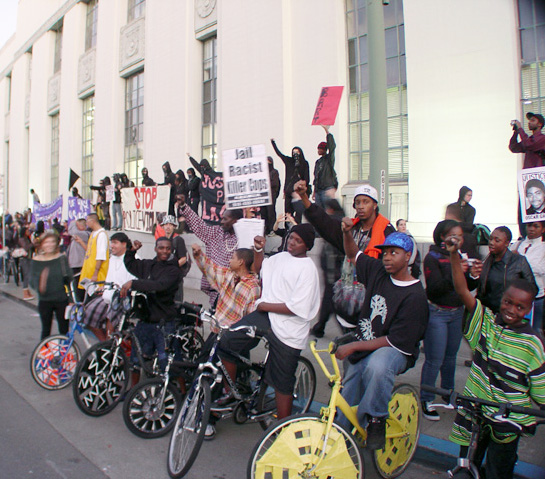 A badge is not a license to murder: Make sure the murderer Mehserle is charged with murder
Rally at Johannes Mehserle’s evidentiary hearing

Build the new civil rights movement to stop police brutality. Rally Monday, May 18, 8 a.m., at the Rene C. Davidson Courthouse, 12th Street and Oak, near the Oakland City Center and the 12th Street BART Station. Join BAMN (Coalition to Defend Affirmative Action, Integration and Immigrant Rights and Fight for Equality By Any Means Necessary) in making the following demands:

• End the D.A.’s and BART’s cover-up! Open an independent public investigation into the murder of Oscar Grant.
• Disarm the BART police.
• BART police out of Oakland.
• Drop all the charges against protesters.

Only an independent, youth-led civil rights movement in Oakland, Berkeley and across California can win justice for Oscar Grant, the man who was shot and killed by BART police officer Johannes Mehserle on New Year’s Day.

What is at stake

The only way to stop future police murders is to organize to make sure Johannes Mehserle is convicted for murder and that the other BART officers are charged for their role in Grant’s killing. Most immediately, we must make sure that Mehserle’s May 18 pre-trial hearing does not result in his murder charge being lowered or dropped.

This fight can have two possible outcomes: First, we can make an example of the police who killed Oscar Grant and reduce the chances of this happening again. This is a precious opportunity to draw a line in the sand and show the police that if they kill, they will be jailed.

The other possibility is that the police demonstrate they can get away with murder even when the evidence is strong against them. A statewide police officers’ fund is financing Mehserle’s high-priced attorney, and District Attorney Tom Orloff is trying to let Mehserle walk free because they want to maintain the police’s prerogative to harass, brutalize and kill Black and Latina/o youth with impunity.

In the past 15 years, although more than 5,000 have been killed by the police, only six cases nationwide resulted in police being charged with murder. None were convicted, even when the murders they committed were obvious and egregious. However, through mass organizing, such as the campaign that got murder convictions of police officers in Detroit in 1993 for killing Malice Green, we can win a conviction and increase the power of our communities no matter what the legal outcome.

End the D.A.’s and BART’s cover-up

District Attorney Orloff - who normally works on behalf of the police - and BART are attempting to cover up the murderous actions of the police. Orloff charged Mehserle with murder two weeks after he shot Grant, only after massive community protest. The only evidence he has presented has been police testimony.

Orloff’s prosecuting attorney sat silently during the bail hearing and failed to raise a single objection to stop the two-month delay that was granted to Mehserle’s lawyer to buy more time to slander Oscar Grant. Orloff still has not charged Tony Pirone and the other BART police who were accomplices to Oscar Grant’s murder and cover-up, yet he is prosecuting protesters who have stood up against this injustice.

The BART cover-up and legal conspiracy for injustice went one step further in their recent response to charges filed by Oscar Grant’s family. In complete disregard of the evidence, BART claims that police officers Mehserle, Pirone and Domenici were acting in self-defense. In spite of having had the opportunity to investigate this murder for months, BART is claiming they have insufficient evidence to address the host of specific allegations made by family, friends and the movement for justice for Grant.

Oakland Mayor Ron Dellums has not spoken out against the handling of the investigation and the prosecution of this case.

It is clear that Oscar Grant is not going to get justice through the police, the Alameda prosecutor’s office or any of the official bodies. Only a youth-led civil rights movement in Oakland that conveys that if there is no justice there will be no peace can ensure that justice is done.

What you can do

Join the campaign to win justice for Oscar Grant. Demonstrate at the May 18 evidentiary pre-trial hearing to make sure Mehserle’s murder charge is not lowered or dropped. Join the public independent investigation into Grant’s killing. Also, join the mass petition campaign at BAMN.com/oscargrantpetition.asp. This is a way to organize our community, express our power, and compel officials to respond to our demands. Join the “Justice for Oscar Grant Action Page” on Facebook (type these words into Google) for news and action alerts.

For more information and to get involved, contact the Coalition to Defend Affirmative Action, Integration and Immigrant Rights and Fight for Equality By Any Means Necessary (BAMN), (510) 501-2435 or ronaldsf [at] gmail.com.
END_OF_DOCUMENT_TOKEN_TO_BE_REPLACED
Add Your Comments
Support Independent Media
We are 100% volunteer and depend on your participation to sustain our efforts!