by Takver - Sydney Indymedia
Thousands of Australian people in the city of Melbourne rocked up to St Kilda Beach to be part of a Climate Change Human Sign. The message: "Climate Change - Our Future is in your hands." was formed by people on the beach to demand action from politicians. 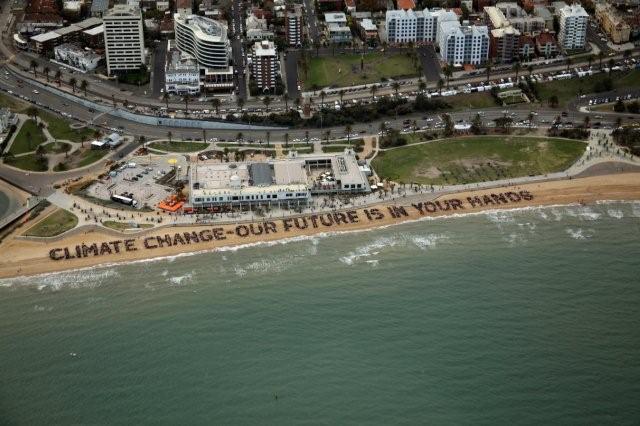 Thousands of Melbourne people rocked up to St Kilda Beach to be part of a Climate Change Human Sign near the St Kilda Sea Baths. The event was organised by Locals into Victoria's Environment and promoted by the Climate Emergency Network and is a call for politicians at all levels of Government to make the hard decisions by legislating to drastically reduce carbon emissions and negotiate meaningful international carbon reduction targets at the Copenhagen Conference of Parties in December 2009.

The Australian Government has been much criticised for its Carbon Pollution Reduction Scheme it wants to legislate for, in that too many free permits are handed out to big business and targets are set far too low. In the budget handed down by the Rudd Federal Labor Government the environment and climate change funding were relegated to second fiddle to economic recovery. Eight people were arrested in a dramatic climate protest at Canberra during the 2009 Government budget session over the Government's inadequate response to climate change.

In Victoria the Brumby Labor Government is proceeding with a Desalination plant for Melbourne which will boost carbon emissions. Alternative water sources that are less costly and more environmentally friendly, such as stormwater harvesting, rainwater tanks and tertiary treatment and purification water recycling have been passed over in favour of a high tech, high cost, energy intensive and polluting solution.

§Only video of the event I could find
by repost
Google cites indybay.org for videos of the event, but all links go only to the still above. Here's a YouTube video:

http://www.youtube.com/watch?v=PbArzwFrHmk
Add Your Comments
Support Independent Media
We are 100% volunteer and depend on your participation to sustain our efforts!