by Mike Rhodes (editor [at] fresnoalliance.com)
Fresno homeless rights activists have caught the eye of Homeland Security and the attention of the Police Department's Terrorism Liaison Officers. Photo below: The Mariposa Mall in Fresno, where this story begins. 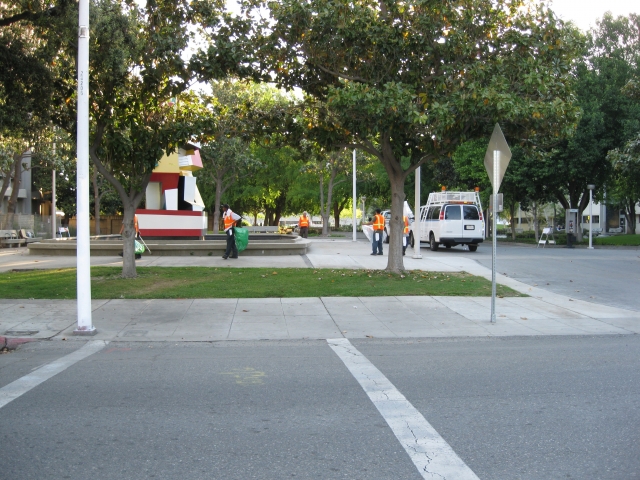 Several homeless advocates monitored the “clean up” and removal of homeless people’s property on the morning of April 22, 2009 by City Sanitation Workers. “Clean ups” at the Mariposa Mall site, just west of Fresno City Hall, are conducted about once a month. City Sanitation puts up signs announcing the date of the clean up, most of the homeless people move out shortly before they arrive, and move back later in the day. It is a meaningless game of cat and mouse that is not intended to help the homeless or make their life better in any way. As a result of this constant harassment, sometimes the homeless lose their property. This happens if they are gone for a few days visiting a friend or family member when the city “cleans up” this encampment.

The signs announced the start of the “clean up” as 8 a.m., but on April 22 they started early. Bill Simon, chairperson of the local ACLU and one of the advocates who were on site that day, wrote that “Phil Connelly arrived at the cleanup site at 7:20. Georgia and I arrived about 7:40. All 3 of us had cameras. Phil said the cleanup started just after he got there. One homeless woman was there talking to Phil when I arrived and no other homeless were in sight. She was all packed up and left as I arrived.”

Connelly left the Mariposa Mall “clean up” and went to the City of Fresno Corporate Yard (2101 G street) in an attempt to see where the confiscated property was taken. It has been city policy to store property at that location for 90 days, or until it is reclaimed. Connelly says he spoke with Phillip Weathers at the Community Sanitation office. “I saw Weathers at the event today and at a previous clean up on H St. He supervised both events. He told me the confiscated items were not brought to the City of Fresno Corporation Yard (the large complex at the N/W corner of G and El Dorado Streets),” Connelly wrote in an email.

The policy of storing homeless people’s property for 90 days is the result of a lawsuit against the City of Fresno. The homeless won a class action lawsuit against the city, because City Sanitation was taking and immediately destroying homeless people’s property. The homeless received a $2.3 million settlement in the case, the largest settlement of its kind in the country.

A few days after his visit to the City of Fresno Corporate Yard , Phillip Connelly was contacted by Sgt. Ronald Grimm, Homeland Security Coordinator for the Fresno Police Department. Here is the letter he received:

This e-mail is in regards to your visit to the City of Fresno Corporate Yard (2101 G Street) on April 22 of this year. This facility is considered a Key Resource to the City of Fresno, and is critical to the continuity of government for our area. Inasmuch, issues regarding the security (or breeches of security) at this facility fall within the investigative responsibility of the Fresno Police Dept. Your actions during your visit to this facility (primarily the photographing of specific sites on the premises and the contact you had with City personnel) caused concern among several City employees and was brought to the attention of the Police Department's Terrorism Liaison Officers.

While we assume your visit to the premises was related to an ongoing investigation, I would like to ask for your cooperation for any future visits. If possible, could you please inform City employees at the facility as to the nature of your visit and the particular public areas you would like to visit. Also, if you could inform these same employees that you will be taking photographs in public-access areas it would probably prevent the issue from becoming a concern of the Terrorism Liaison Officer unit.

Thank you for your anticipated cooperation in this matter. If you have any questions please feel free to contact me directly.

Is being an advocate for homeless rights a legitimate reason for being investigated by Homeland Security and coming under the scrutiny of the Police Department's Terrorism Liaison Officers? Will Connelly and other advocates be on a Homeland Security watch list of Domestic Terrorists? Perhaps Connelly is destined to be whisked off the street, sent to Guantanamo Bay, and tortured until he confesses his nefarious actions in support of homeless people in this community?

Today (Monday, May 11) I was downtown at the Fresno Police Department (with a delegation from the ACLU, getting a presentation about their use of video surveillance cameras) when Sargent Ronald Grimm, Homeland Security Coordinator for the Fresno Police Department comes over to say hi. Of course, I asked him why they had targeted Phil when he was at the City Yard. Grimm explained that they had just conducted a workshop on the importance of City of Fresno employees being “alert” to anything unusual happening in their workplace - or perhaps anywhere in the city. In any event, one “alert” employee saw Phil at the City Yard, took notes about what he was doing, probably wrote down his car’s licence number, and promptly reported the suspect to the Police Department's Terrorism Liaison Officer. Grimm contacted Burke Farah, who is in charge of Video Surveillance, and his department reviewed the video of Phil walking around looking for what the city did with the homeless people’s property they removed from the Mariposa Mall. The search of the video did not, we can assume, turn up anything too sinister, so the police tracked Phil down through his car license number or by talking to Phillip Weathers in the Sanitation department, who Phil spoke with while at the City Yard.

After talking to Grimm, I drove out to the City Yard and took some photos of my own. The City Yard is wide open and there are no obvious signs telling people not to step foot on this public property, which we as taxpayers pay for. I, like Phil, looked around for the property taken from homeless people, but it was not where they have stored the property in the past.

While I was at the City Yard a reporter from ABC TV ch 30 called and asked if he could interview me about the incident. We did the interview on the City Yard property and I told him that it was outrageous for the police to send Phil a letter from Homeland Security, when all he was doing was helping the homeless. The paranoia that results, when people are asked to spy on each other, results in a witch hunt. The best case scenario is that people just waste their time chasing their tail. But, if people like Phil get put on a terrorist watch list or if people are frightened away from becoming involved to help the homeless because they don’t want the government to suspect them of being a terrorist, then we are all much worse off. If the police are successful in their goal of blanketing the city with video surveillance cameras, Homeland Security has people spying on each other, and there is nothing you can do that is not monitored. . . then were all going to feel a whole lot safer, right? Either that or we will wake up and realize that we are living in a police state.
END_OF_DOCUMENT_TOKEN_TO_BE_REPLACED
§The “Official Notice” of the “Clean-up”
by Mike Rhodes 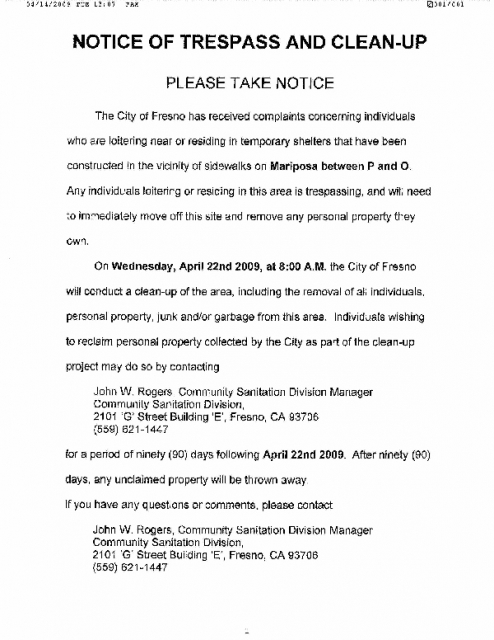 END_OF_DOCUMENT_TOKEN_TO_BE_REPLACED
§“Clean Up” Crews in Action
by Mike Rhodes 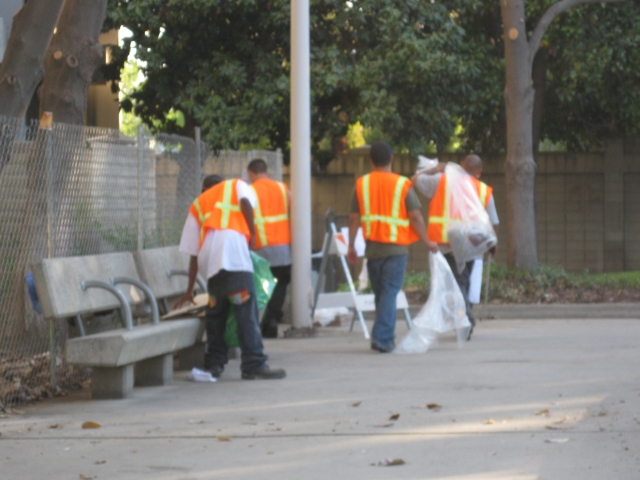 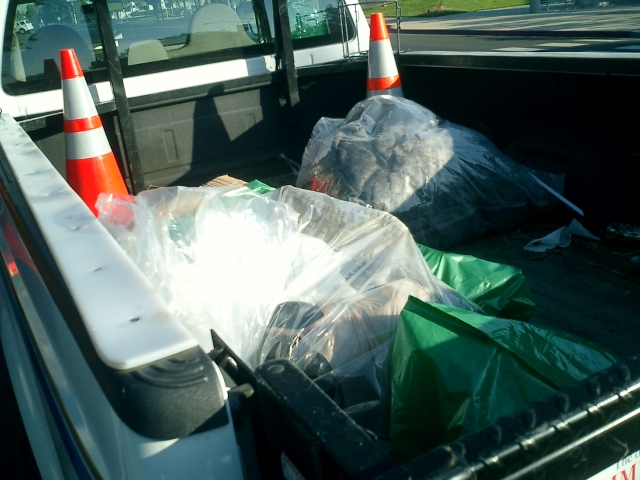 original image (1280x960)
Thanks to Phil Connelly and Georgia Williams for the photos.
END_OF_DOCUMENT_TOKEN_TO_BE_REPLACED
Add Your Comments
Comments (Hide Comments)
§How is the City of Fresno Corporate Yard involved with the Gestapo?
by Fuck "Homeland Security"
It would be worthwhile to find out and publicize what "continuity of government" (martial law?) functions are or will be served by the City of Fresno "Corporate Yard" (or "Corporation Yard").
Add a Comment
§Employee Rights
by Mark
I think the city employees have the right to not be harrassed by photographers. They are doing their job and should not have to be concerned with activists focusing on them rather than the people who make the decisions.
Add a Comment
§what the fuck!
by (A) AARONLOVE!
i really dont know what to say im pissedbeond pissed ness


homeless and squatters rights!
Add a Comment
§Main Stream Media Views the Hobo Terrorists
by (posted by) Robert Norse
http://abclocal.go.com/kfsn/story?section=news/local&id=6807762
Add a Comment
§homeland security doesn't like books either
by primate
a couple years ago, there was an anarchist bookfair (yes, a bookfair, where people exchanged and sold books) in the pacific northwest and the police talked to the landlady who owned the building and said the bookfair was a homeland security threat.

a lot of people and activities seem to be terrorist/security threats these days. interesting. *coughfascismcough*
Add a Comment
Support Independent Media
We are 100% volunteer and depend on your participation to sustain our efforts!