Add an Event
Newswire
Calendar
Features
Home
Donate
From the Open-Publishing Calendar
From the Open-Publishing Newswire
Indybay Feature
Related Categories: Peninsula | Anti-War | Government & Elections
Stanford Alumni Nail Condi War Crimes Petition to Door of Stanford President's Office
by R. Robertson
Sunday May 3rd, 2009 2:49 PM
On Sunday, May 3 Stanford alumni returning to the campus for a reunion marking the 40th anniversary of the anti-war April Third Movement nailed a petition to the door of the University President’s Office in Stanford’s Inner Quad. The petition demanded that Condoleezza Rice and other high government officials be held accountable for serious violations of law. Condoleezza Rice is back on Stanford campus this year and is facing questioning by students who have cornered her in halls and protests on campus.

Top Photo: "Ready to Nail It." Returning after many years away from Stanford, Lenny Siegel, with hammer in hand, is joined by Marjorie Cohn. Cohn is a leader of the April Third Movement and now President of the National Lawyers’ Guild. 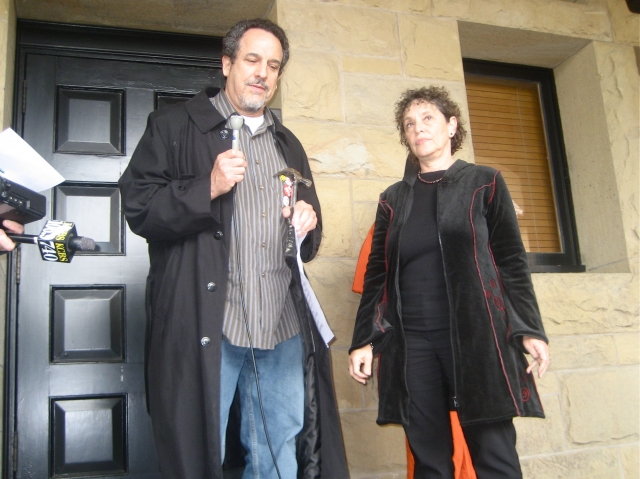 original image (2534x1900)
The petition stated:
"We the undersigned students, faculty, staff, alumni, and other concerned members of the Stanford community, believe that high officials of the U.S. Government, including our former Provost, current Political Science Professor, and Hoover Institution Senior Fellow, Condoleezza Rice, should be held accountable for any serious violations of the Law (including ratified treaties, statutes, and/or the U.S. Constitution) through investigation and, if the facts warrant, prosecution, by appropriate legal authorities."

Marjorie Cohn, a leader of the April Third Movement and now President of the National Lawyers’ Guild, explained, “By nailing this petition to the door of the President’s office, we are telling Stanford that the university should not have war criminals on its faculty. There is prima facie evidence that Rice approved torture and misled the country into the Iraq War. Stanford has an obligation to investigate those charges.”

Forty years ago last October, many reunion participants nailed a document on the Stanford Trustees’ Inner Quad office door demanding that Stanford “halt all military and economic projects and operations concerned with Southeast Asia,” launching a campaign that led to the formation of April Third Movement in Spring, 1969. The A3M’s nine-day sit-in at the Applied Electronics Laboratory brought an end to secret military research on campus.

For information about the reunion, see http://www.a3m2009.org. 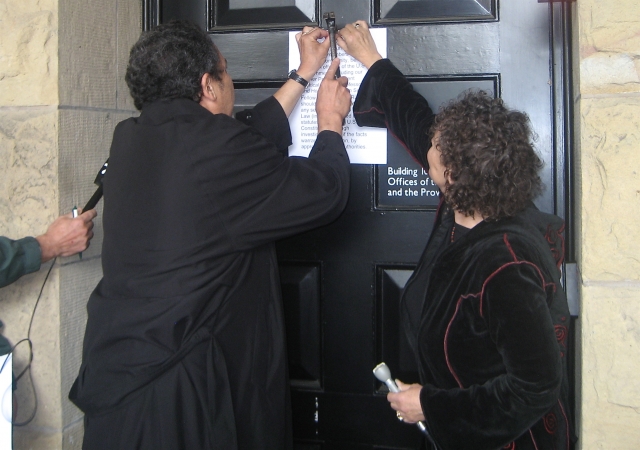 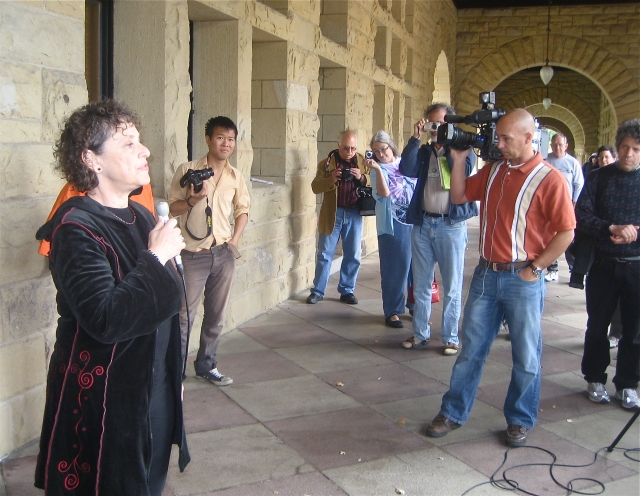 original image (2523x1959)
About 100 members of the April Third Movement and current students attended the event. Representatives of corporate, student, and independent media were there to document this historic action.
http://antiwar.stanford.edu.
§At the president's door
by R. Robertson
Sunday May 3rd, 2009 2:49 PM 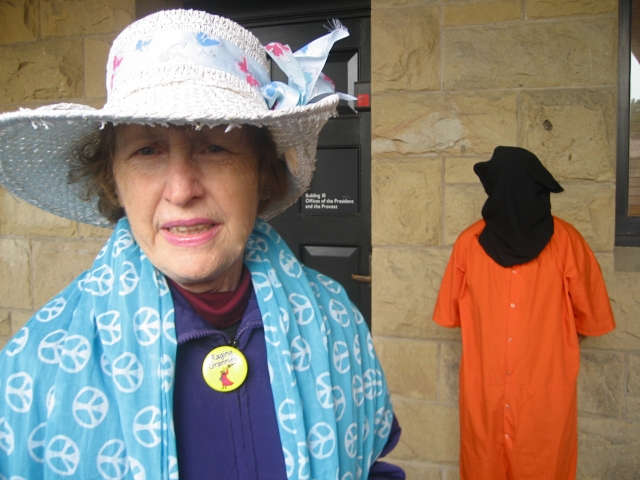 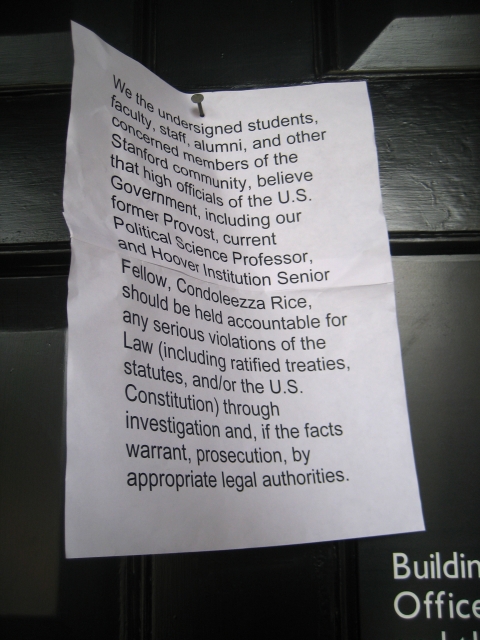 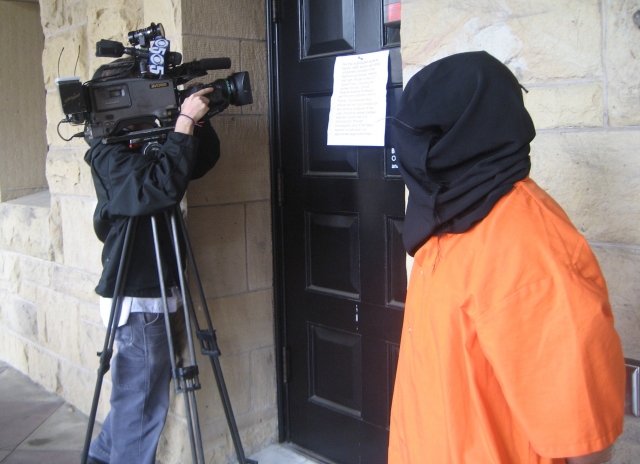 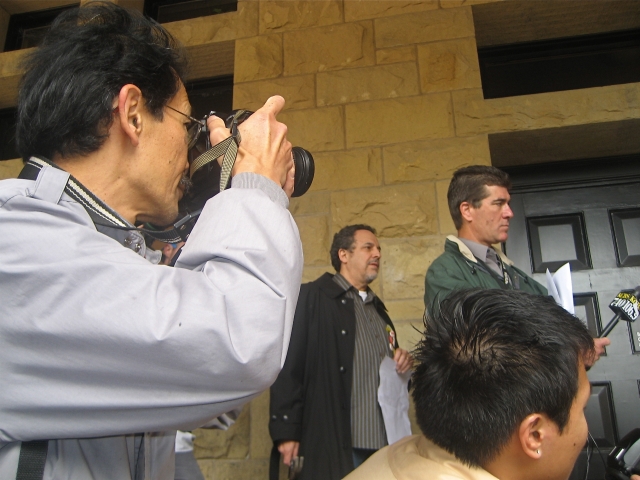 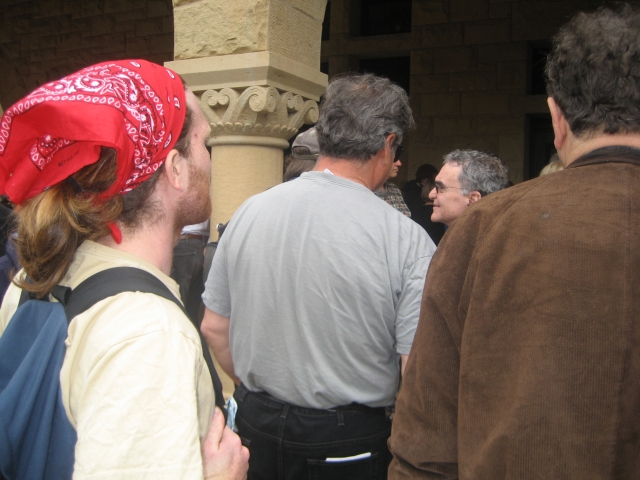 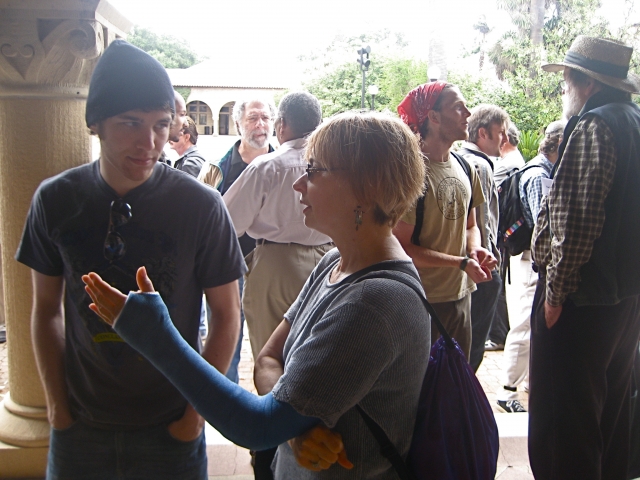 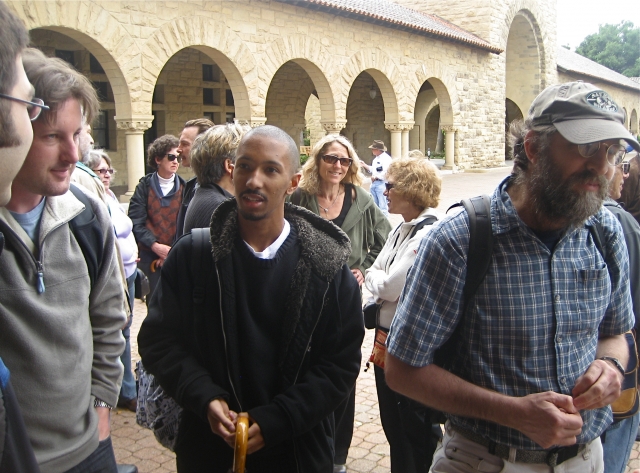 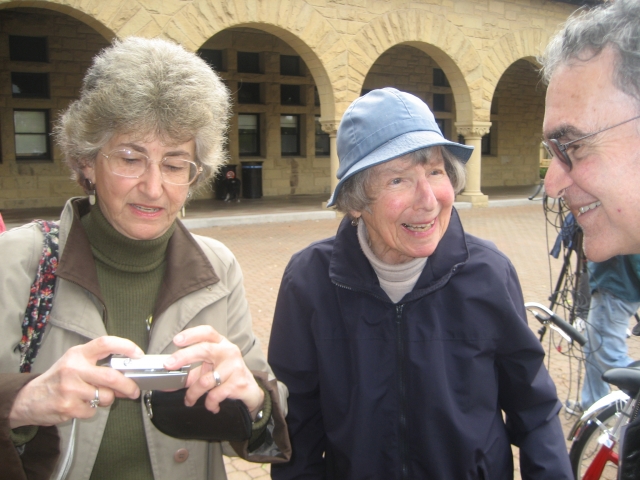 original image (2816x2112)
For articles including "The High Cost of Occupations" by Ms. Marshall see http://middleeastwindow.com/rachellemarshall
http://antiwar.stanford.edu.
§After hammering, Lenny "makes his escape"
by R. Robertson
Sunday May 3rd, 2009 2:49 PM 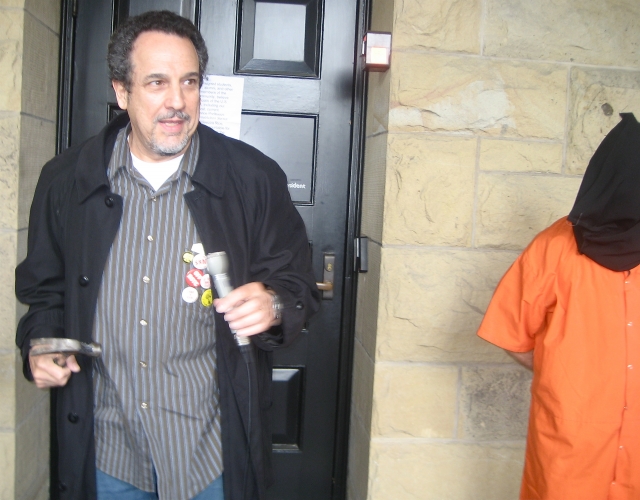 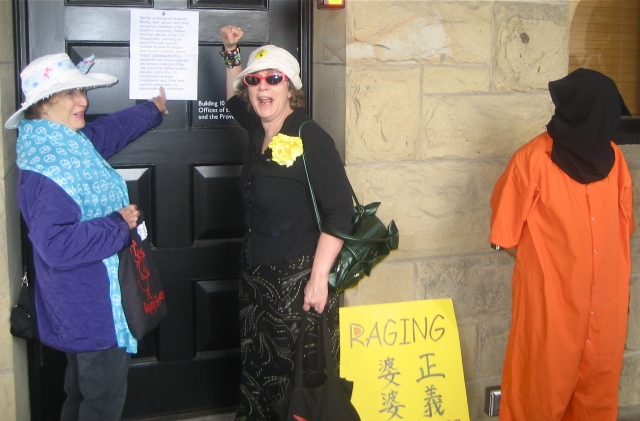 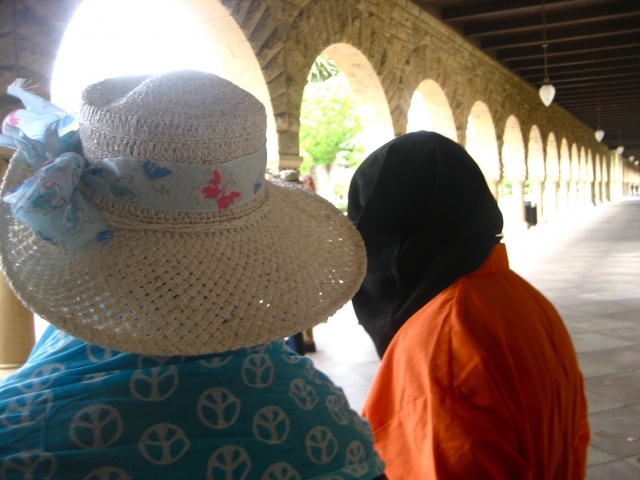 original image (2816x2112)
http://antiwar.stanford.edu.
Add Your Comments
LATEST COMMENTS ABOUT THIS ARTICLE
Listed below are the latest comments about this post.
These comments are submitted anonymously by website visitors.