by Dan Bacher
"We're closer than we've ever been to dam removal," said Klamath Riverkeeper Erica Terence just prior to a press conference in Omaha, Nebraska this morning. "Now we need the company, the federal government, Oregon and the State of California to finish what they started and produce a final agreement that works for the river. We're hopeful, but the salmon aren’t in the smokehouse yet!"

Today members of the Klamath River Tribes, commercial fishermen and conservationists are at Warren Buffett's Berkshire Hathaway meeting in Omaha, Nebraska to ask the richest man in the world to "close the deal" to remove four Klamath River dams and open up the upper river and tributaries above the dams for the first time in many decades to salmon and steelhead. The groups are strongly opposing Governor Arnold Schwarzenegger's attempt to link dam removal to a costly water bond including a peripheral canal and more dams. Photo by Dan Bacher. 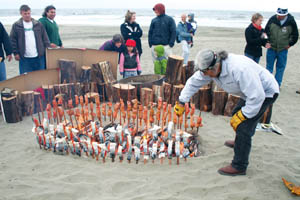 Omaha, NE – On May 1, 2009, Tribal members, commercial fishermen, and conservationists will once again travel to Warren Buffett’s Berkshire Hathaway shareholders meeting in Omaha, NE to advocate for the removal of four Klamath River dams. However, the groups say this year’s event will offer Buffett and Berkshire Hathaway subsidiary PacifiCorp measured praise for entering into dam removal talks with local stakeholders.

“We believe that Mr. Buffett’s PacifiCorp is on the right track,” explains Georgiana Myers, Riverkeeper Organizer and Yurok Tribal member. ”We are here to urge Mr. Buffett to close the deal and open our river.”

Last fall, after years of protests, lawsuits, and demonstrations, PacifiCorp’s new management made a bold policy shift and signed an agreement in principle to give up the dams in exchange for capping ratepayers’ cost liability and permission to operate the dams until 2020. Since then Tribes, fishermen, farmers, and others have been working cooperatively with company officials to finalize the settlement agreement, which is due out later this summer.

“PacifiCorp’s dams are toxic assets that would cost more to retrofit to meet environmental standards and relicense than to remove. PacifiCorp made a smart decision to try to move these toxic assets off Berkshire Hathaway’s balance sheet,” said Frankie Joe Myers, a fisherman and member of the Yurok Tribe. “Taking the dams down can increase salmon stocks as well as Berkshire’s stock.”

Dam removal advocates credit new leadership at PacifiCorp for making the policy shift. However, while the company has agreed in principle to dam removal and continues to negotiate for a final agreement, negotiations are not yet completed, and a final deal still has to be worked out.

"We're closer than we've ever been to dam removal. Now we need the company, the federal government, Oregon and the State of California to finish what they started and produce a final agreement that works for the river," said Klamath Riverkeeper Erica Terence. "We're hopeful, but the salmon aren’t in the smokehouse yet!," she concluded.

“We are impressed with PacifiCorp’s efforts since last fall to work out a mutually beneficial agreement to remove the dams. We are here to give PacifiCorp’s new management the credit it deserves for backing real solutions to restore this major river, once the third largest salmon-producing river in the nation, as well as to urge them to continue with us all down this new path toward final settlement,” concluded Dave Bitts, President of the Pacific Coast Federation of Fishermen’s Associations (PCFFA), the west coast’s largest organization of commercial fishing families and one of the participants in the ongoing settlement negotiations.

The group plans a press conference at 9 am, Friday, May 1 in the Winnebago room, 3rd floor, Double Tree hotel, 1616 Dodge Street, downtown Omaha.

http://www.Karuk.us
Add Your Comments
Support Independent Media
We are 100% volunteer and depend on your participation to sustain our efforts!