by El Libertario, Venezuela (ellibertario [at] nodo50.org)
* After taking part in a demonstration for lack of job security in 2006, 14 workers of contractor “Transportes Camila de SIDOR” could be sentenced to 5 to 10 years in jail. 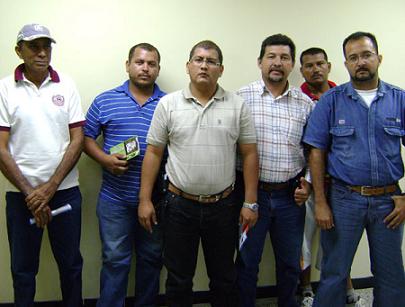 In 05 September 2006 a group of workers and union leaders staged a protest against the carrier Camila, a contractor to SIDOR (Siderurgic of the Orinoco), the principal steel core business located in Puerto Ordaz, Bolivar state, in Venezuela. The workers were protesting the failure to pay wages, and maintain health and safety, as well as the lack of tools to accomplish their work. The protest was endorsed by Readers of the “Sindicato Único de Trabajadores Siderúrgicos y Similares" (Sutiss, the SIDOR`s union), stopping the equipment whose breakdowns and lack of maintenance represented a threat to the integrity of the workers, following the safety procedures in the labor standards. The employers turned to the regional authorities, getting the Public Ministry to issue an arrest warrant against three syndical leaders and a group of workers by the National Guard, which resulted in a protest by workers of the steel mill.

In this way were arrested Leonel Grisette, a member of the Commission who represents 50% workers and 50% of employers on Sutiss; Juan Valor, Secretary of Press and Propaganda, and Jhoel Hernández, Secretary of Culture and Sports of that union. The charges against them were qualified misappropriation and restricting the freedom to work. A trial started for acts defined as crimes after the reform of the Venezuelan Penal Code (Articles 358 to 363) in 2005, and the promulgation of the Organic Law of National Security (Article 56) in 2002: both approved during the Bolivarian government and harmful to the right to strike. The three union leaders, along with 11 workers, 14 of Sidor, have been subjected since 2006 to court procedures, while the trial will end on Wednesday April 29 2009, with the possibility of a sentence of between 5 and 10 years in prison.

Remember that SIDOR was nationalized by President Hugo Chávez in April 2008, following the revocation of the contract with the Argentina transnational Techint. However, a year later, state control has not meant an improvement in the quality of life of the workers. Speaking to “El Libertario”, Leonel Grisette said "It is not true that outsourcing has been eliminated and working conditions of the flexible workers are such that they cause accidents in 4 to 1 ratio with respect to the other workers. Collective bargaining is frozen, and despite the absence of technical safety workers as required by law, we are forced to work under irregular conditions". Moreover, nationalization has neutralized the current board of Sutiss, which has abandoned the 14 workers on trial, so they had to pay out of their own pockets the fees for their counsel, which add up to 100 million bolivars (over $ 44,000).

Human rights and labor organizations have been denouncing the criminalization of protest in Venezuela, as well as the enactement of laws to restrict the legal right to strike, such as the requirements to present themselves in court and the threat of application of the Code Criminal Law and Security of the Nation. For anarchists the legal architecture of repression is part of the government offensive to end the belligerant autonomy of social organizations, with the excuse of fighting coups d'etat and under the rhetorical mask of Bolivarian Socialism, whose consequences are suffered by the people. Although the syndical organizations split and biased within the inter-bourgeois confrontation that has occurred in the country in recent years- do not keep statistics on cases similar to the 14 SIDOR, workers in the states of Carabobo, Aragua, Miranda and Tachira have been subject to presenting themselves in the courts. In this sense statements by the peasant movement Jirajara, located in the state of Yaracuy have counted 103 cases of peasants who after participating in protests and land occupations, have been referred to the courts. For the union activists of the 14 of SIDOR, these procedures are designed to decapitate the militant labor movement, so the possible penalty of 5 or 10 years imprisonment is a warning to other activists and advocates for labor and social rights.

Historically the libertarians have argued that the people will not feel better if the stick who beats them bears the name of stick of the people. We alert the base organizations and collectives of Venezuela and of the world about the potential sentence against the 14 SIDOR. As anarchists members of El Libertario we stand in solidarity with the Venezuelan workers struggling for their rights, we support militant, honest and autonomous unions and will continue to denounce the contradictions of an authoritarian government at the service of the interests of globalized capitalism in the struggle for a self-managed and revolutionary grass-roots alternative preferable to the false polarization which exists in our country.

END_OF_DOCUMENT_TOKEN_TO_BE_REPLACED
Add Your Comments
Support Independent Media
We are 100% volunteer and depend on your participation to sustain our efforts!