Add an Event
Newswire
Calendar
Features
Home
Donate
From the Open-Publishing Calendar
From the Open-Publishing Newswire
Indybay Feature
Publish to Newswire
Add an Event
Related Categories: Central Valley | Health, Housing & Public Services
Safe Ground!
by Mike Rhodes (editor [at] fresnoalliance.com)
Thursday Apr 23rd, 2009 1:46 PM
Homeless people and their allies held a rally on the south steps of the Capitol on Tuesday, April 21. 200 - 300 participants were at the rally and demanded a safe and legal place for homeless people to camp. About 20 people blocked the south entrance and risked arrest to bring attention to this important issue. 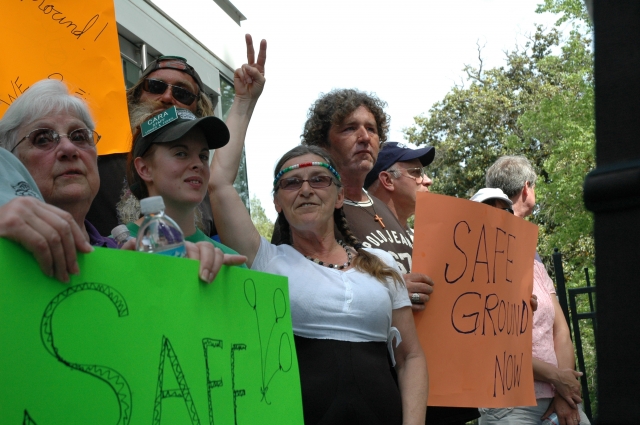 original image (3008x2000)
The following is from the Loaves and Fishes website < http://www.sacloaves.org/safeground/ > and explains what SAFE GROUND is all about:

What is this “Tent City” I’ve heard about?
You may have heard about the Sacramento tent city on The Oprah Show or other news media. The encampment that has received the most attention was the largest in the City, but not the only encampment. The “Tent City” has now been shut down by the City of Sacramento. Most of the campers have dispersed to other less visible areas. All of the encampments in Sacramento are informal gatherings of people sleeping in tents or under tarps. They are considered illegal by the City of Sacramento.

What is this “Safe Ground” you keep mentioning?
Safe Ground is a proposed location where the homeless can camp legally with access to basic needs such as running water, toilets, and trash cans. Safe Ground does not yet exist.

What’s the difference between the “Tent City” and Safe Ground?
The “Tent City” was an illegal and informal gathering of homeless campers on an unsafe and unsanitary site. Safe Ground is an organized location where the homeless can camp legally with access to basic needs such as running water, toilets, and trash cans.
A successful Safe Ground incorporates four things:
1. It is self governed. The campers are responsible for maintaining order and enforcing the rules they choose for themselves.
2. It must be sanctioned by the City and County government. The City and County must give permission for the Safe Ground to exist.
3. It has access to basic sanitation – running water, toilets, and trash.
4. It has a non-profit sponsor.

Why do we need a Safe Ground?
There are over 1200 homeless sleeping on the streets each night. All of the emergency shelters are full to overflowing.. The city of Sacramento has an anti-camping ordinance which makes it illegal for anyone to sleep anywhere but designated camp sites. This leaves over 1200 people with nowhere to go at night. Sacramento needs a legalized Safe Ground with running water, restrooms, and trash cans where people have a safe place to sleep at night.

What is the City doing to help?
The city has shut down “Tent City” and forced everyone to relocate. The city has provided the funds to keep the Overflow shelter open until June and added 50 more beds bringing total capacity to 200. The city is also providing funding for 40 more permanent housing solutions which will be available at a future date. While we applaud the city for moving forward and giving more people the shelter and housing they need, we are also appalled that this accounts for only a small percentage of the 1200 people who are homeless and on the streets.

How Can I Help?
Contact Mayor Johnson and let him know you want a legalized safe ground/tent city. His email address is mayor [at] cityofsacramento.org or phone him at 916-808-5300.
Bring donations of Tents, Tarps, Sleeping bags, and backpacks to Loaves & Fishes or other local nonprofits.
Volunteer at Loaves & Fishes or one of the other local nonprofits already serving the homeless.
Join our Action Alert E-mail list to get timely news on how to help.Click Here to go to the sign up form.

Where is Tent City?
Sacramento has had many tent cities over the years. Because they are considered illegal by the city they typically only last for a few months before being shut down by the authorities. The Tent City featured on most media channels has been shut down by the City of Sacramento. Most of the campers have dispersed to other less visible locations.

Can I bring things to Tent City?
The large Tent City has been shut down, and the campers dispersed. Until a legal safe ground with the proper water, trash, and sewer facilities is established bringing food and other items to tent encampments typically results in loads of trash causing health and safety issues. We recommend not bringing things directly to tent encampments but instead to a local nonprofit who is serving the homeless population. Loaves & Fishes, The Salvation Army, The Union Gospel Mission, and Volunteers of America are all serving the homeless population and are well prepared to give out supplies in a safe, organized, and fair manner.

What is Loaves & Fishes doing to help?
Loaves & Fishes has been providing survival services to the homeless since 1982. Because of the proximity of Loaves & Fishes to many tent encampments many of the campers come to us for basic survival services. We serve 400-700 people a hot lunch everyday, provide over 100 showers each day, and have clean fully stocked restrooms available. On our campus are a dozen programs to help homeless people including a school for homeless children, a daytime resource center for homeless women, a medical clinic, mental health program, recovery program , legal clinic and shelter for mentally ill homeless women.
We are a part of the Safe Ground task force, which is actively exploring how and where to set up a Safe Ground. We are also holding a Safe Ground rally on the Capital Steps on April 21 at 2pm.
Loaves & Fishes also advocates on behalf of the homeless by attending city council and county board of supervisors meetings, alerting the public to urgent issues through our Action Alert Email List, fighting for the rights of the homeless, and by organizing marches and rallies when needed.
To Join the Action Alert List Click Here.

Won’t a sanctioned tent city turn Sacramento into a homeless magnet?
Numerous studies of homeless people in Sacramento have shown that overwhelming majority have lived here 5 years or longer. People become homeless in the same community where they once had an income and a home.

Is safe ground the solution to homelessness?
No, the solution is to recognize that housing is a basic human right and commit ourselves to ensuring that all Sacramentans of all income levels can afford a simple home of their own. However, until we reach that goal, we should provide safe ground for those forced to live outside for lack of a better alternative. 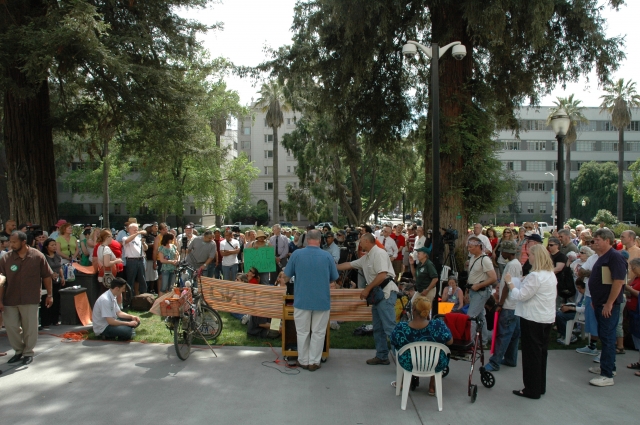 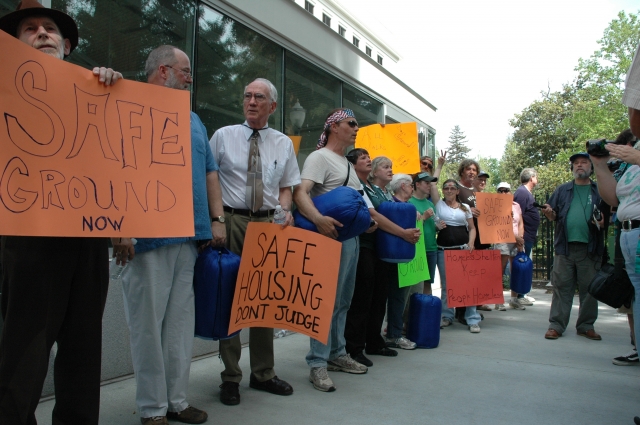 original image (3008x2000)
These are some of the people who were risking arrest to bring attention to the need for Safe Ground. All photos by Mike Rhodes. 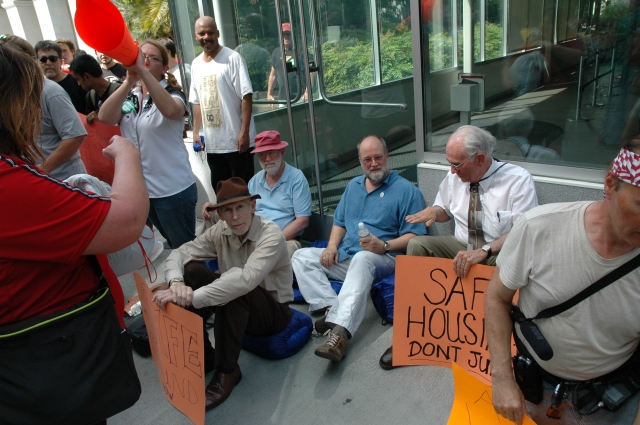 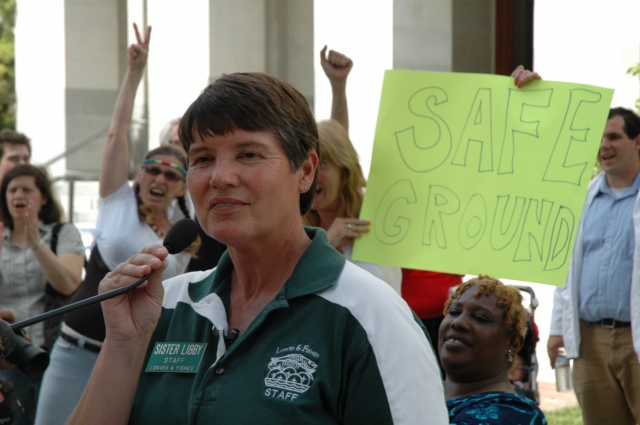 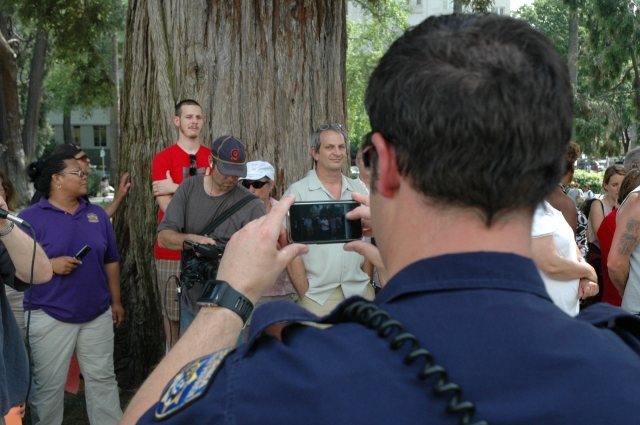