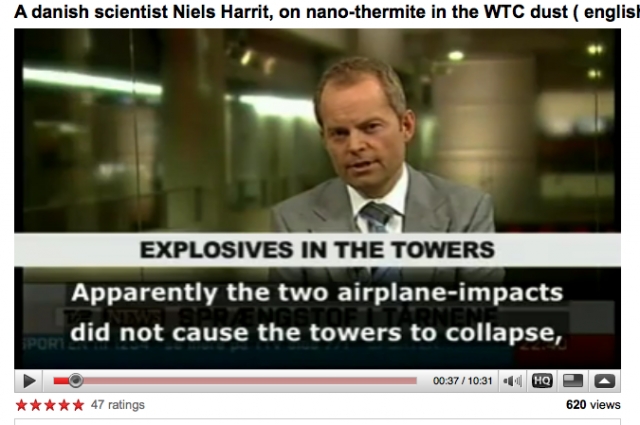 original image (675x449)
At around 10:30 pm on Monday April 6, Harrit was interviewed for 10 minutes during the late news program on one of the two most respected Danish television channels (TV2).

On Wednesday April 8, Harrit was interviewed for 6 minutes at 8:45 am during a live news and entertainment program on the same channel. In both cases, Harrit, and the claims of the article, were treated with refreshing seriousness and respect.

We are working on subtitles for the second 6 min. interview (covers similar material) and will post this later. The journal article has also received reasonably fair coverage in a number of mainstream Danish newspapers (these articles are in Danish, the headlines are translated below):

Ingeniøren: Research team claims to have found nano-explosive in the World Trade Center

We hope this precedent may serve to encourage journalists in other countries to take the article's findings seriously, and start looking more critically at 9/11. Do what you can to make them aware of this coverage in your country.

We have discovered distinctive red/gray chips in all the samples we have studied of the dust produced by the destruction of the World Trade Center. Examination of four of these samples, collected from separate sites, is reported in this paper. These red/gray chips show marked similarities in all four samples. One sample was collected by a Manhattan resident about ten minutes after the collapse of the second WTC Tower, two the next day, and a fourth about a week later. The properties of these chips were analyzed using optical microscopy, scanning electron microscopy (SEM), X-ray energy dispersive spectroscopy (XEDS), and differential scanning calorimetry (DSC). The red material contains grains approximately 100 nm across which are largely iron oxide, while aluminum is contained in tiny plate-like structures. Separation of components using methyl ethyl ketone demonstrated that elemental aluminum is present. The iron oxide and aluminum are intimately mixed in the red material. When ignited in a DSC device the chips exhibit large but narrow exotherms occurring at approximately 430 °C, far below the normal ignition temperature for conventional thermite. Numerous iron-rich spheres are clearly observed in the residue following the ignition of these peculiar red/gray chips. The red portion of these chips is found to be an unreacted thermitic material and highly energetic.
http://www.bentham.org/open/tocpj/openaccess2.htm 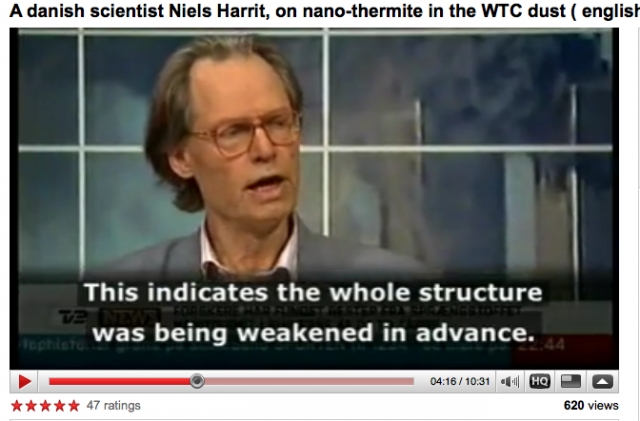 original image (672x443)
Add Your Comments
§HOW PSYCHO-MEDIA CONTROLLED ARE WE?
by Doroteo Arrango
(gordonandguevara [at] yahoo.com) Sunday Apr 12th, 2009 11:32 PM
NIELS HARRIT'S CONFIRMED AND DOCUMENTED DISCOVERY OF THERMITE EXPLOSIVE THROUGHOUT THE WTC TOWER'S COLLECTED DUST, DESTROYS THE BUSH/CHENEY/ZELIKOW LIE OF HIJACKERS -OR- 'JETFUEL'(MERELY KEROSENE WITH ANTI COAGULANT ADDITIVE) - BRINGING DOWN THE TOWERS.

BUSH/CHEN/ZEL. PUSHED THROUGH AND EVEN EDITED THE PHONEY F.E.M.A. REPORT ON THE COLLAPSE OF THE TOWERS.

THEY REFERED TO PROMINENT PHYSICISTS SUCH AS DR. STEPHEN JONES' IN HIS STUDY AND OBSERVATION THAT THE TOWERS CAME DOWN AT FREEFALL SPEED (THE SPEED ONLY POSSIBLE FOR AN OBJECT SIMPLY DROPPED - OR A CONTROLLED DEMOLITION BUILDING FALL AS . . . . . "OUTRAGEOUS CONSPIRACY THEORIES".

THE ONLY REAL QUESTION LEFT IS "ARE ALL THE U.S.'s PEOPLE TOO PSYCHO-ELECTRICALLY MIND CONTROLLED TO CALL FOR A COMPLETE INVESTIGATION OF NOT ONLY THE WTC COLLAPSE BUT BUSH, CHENEY, ZELIKOW AND GULIANI - ALL OF WHOM OBSTRUCTED ANY INVESTIGATION OF -THEIR- CRIME OF FALSE-FLAG BLOWING UP THE TOWERS WITH PREVIOUSLY SET CONTROLLED DEMOLITION CHARGES?"

ALL THE LIARS IN THE INTERNET AND NEWS MEDIA WHO DID ALL THEY COULD TO DENY, MARGINALIZE AND TRIVIALIZE THESE FACTS ARE ALSO GUILTY AS PART OF THE BUSH/CHENEY AND U.S. CONGRESS CONSPIRACY TO TAKE DICTATORIAL CONTROL OF THE UNITED STATES BY MEANS OF THIS FALSE FLAG CRIME.
Add a Comment
§thermite, shmermite. It's much more about what is revealed by SO MANY NANO-PARTICLES!!!
by student of 9/11
Tuesday Apr 14th, 2009 6:46 PM
The distribution of the sizes of the smallest particles reveal that they were too small to have been caused by pulverization. The most likely cause (if you know of another, please let us all know) of so many nanoparticles is that they came from molecular dissociation: when molecules are given enough (thermal) energy, covalent molecular bonds fail, resulting in loose atoms and fragmented molecules.

So simple, even a caveman physicist can get it!

Which is why, along with the pyroclastic debris flows (emblematic of a volcano-like amount of energy released), and the "hot spots" which persisted, and continuted to cause nanoparticles to be created, for months, it makes lots of sense to at least consider the possibility of advanced clean small nuclear outbursts of energy, and no sense at all to keep on yammering away about "thermite" year after year like a broken record.

Basically, even if nano-termite was found in the WTC dust, A) that doesn't explain why it'd been reduced to nanometer sized particles, and B)that still cannot account for why all of lower Manhattan was blanketed in fine dust laden with nanoparticles.

So what do Hoffman, Jones, Niels Harrit, Farrer and Ryan et. al all have in common? They all dishonestly deny, if only by omission, the possibility that advanced secret nuclear weaponry was utliized. Jones is a U.S. DoE fusion expert so he ought to know. Actually, he ought to know better: (Dr Steven E. Jones, PhD, caught LYING, by commission, about the possibility of [relatively clean] nuclear fusion without requiring a radioactively dirty nuclear fission trigger to set it off! -- no honest nuclear fusion expert could possibly honestly have been so wrong. His statement amounts to that of a clean nuclear energy gatekeeper saying, "No nuclear possibility to consider here, Citizen. Move along!")

Total non-story
http://www.ronmossad.com
Add a Comment
§"advanced secret nuclear weaponry"
by reader
Sunday Jun 21st, 2009 4:08 PM
The attempts to tag "nuclear weaponry" and "mossad" with this posting are pretty transparent -- discredit by association, a tired tactic we see over and over whenever meaningful 9/11 work is done by actual scientists being published in journals.

Were “mini-nukes” used at the World Trade Center?
“Hard Evidence Repudiates the Hypothesis that Mini-Nukes Were Used on the WTC Towers” (January 16, 2007)
Dr. Steven Jones
http://journalof911studies.com/letters/a/Hard-Evidence-Rebudiates-the-Hypothesis-that-Mini-Nukes-were-used-on-the-wtc-towers-by-steven-jones.pdf

And the role of the mossad has even been covered on DemocracyNow (http://www.democracynow.org/2007/2/8/cheering_movers_and_art_student_spies ), but the issue of "the Jews Did it!" is what is constantly attempted to be shackled to 9/11 groups, most of which openly reject the racist and Holocaust denial claims often associated with individuals focusing on Israeli or Mossad roles.

Discrediting By Association: Undermining the Case for Patriots Who Question 9/11
August 13, 2007
"It is important to note that falling for mis- or dis-information is not a sign of weakness or a failing, but is actually part of a natural human sense of fairness, compassion, and flexibility. Most false claims depend on these admirable qualities to spread. And more than likely, most sincere people working hard to spread truth have been taken in by hype at one time or another before looking into the details. Some prominent advocates of false claims may themselves have been duped or manipulated, or simply don't have the ability to critically evaluate the evidence. Regardless, claims which have been widely and publicly rejected by the vast majority of the 9/11 truth community, and which have gained no support via the evidence in the six years since 9/11, should never be presented to reporters in the mainstream press, NIST, or any other public body. Yet this has happened, repeatedly."
Add a Comment
§URL of last excerpt
by reader
Sunday Jun 21st, 2009 4:09 PM
For last excerpt --

http://911research.wtc7.net/essays/patriots_question/index.html
Add a Comment
Support Independent Media
We are 100% volunteer and depend on your participation to sustain our efforts!