by Mike Rhodes (editor [at] fresnoalliance.com)
Close to 100 residents of the Storyland Motel in Fresno have until Friday, April 10 to vacate their rooms. The City of Fresno condemned the motel on March 18 because of numerous code violations, which included broken windows, rodents, mold, and broken plumbing. 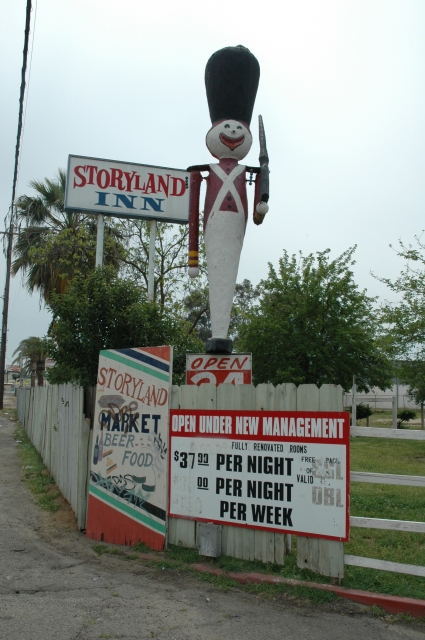 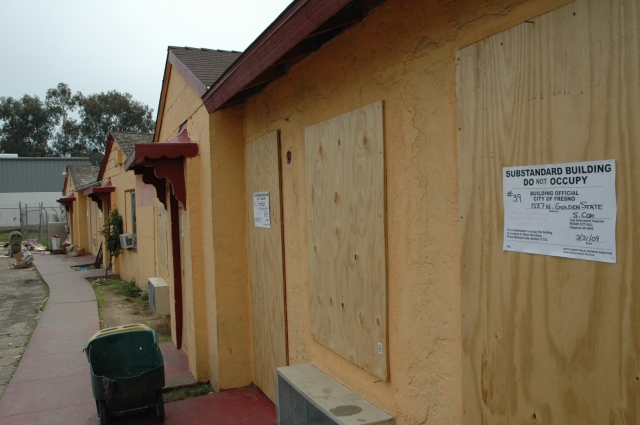 original image (3008x2000)
Storyland Motel residents, most of whom are poor and one step away from homelessness, have been forced to move out of the Storyland Motel. The City of Fresno did set up a relocation program and are paying for moving expenses. The city is also giving vouchers to the residents to move into other inexpensive motels in the area. When I was there today, a representative from the Central California Legal Services was on site to make sure that the residents legal rights were protected. 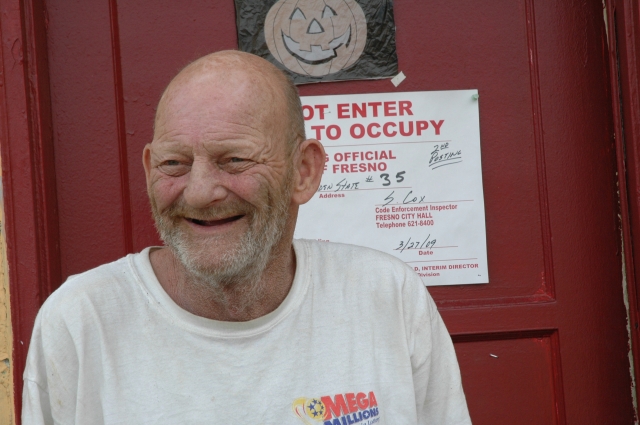 original image (3008x2000)
John P Saunders lives at the Storyland Motel and is hoping to relocate to the Sahara Motel. John is a retired diesel mechanic His sister Carol, who lives next door, is trying to move but says she is having a hard time finding someplace that will accept her dogs. 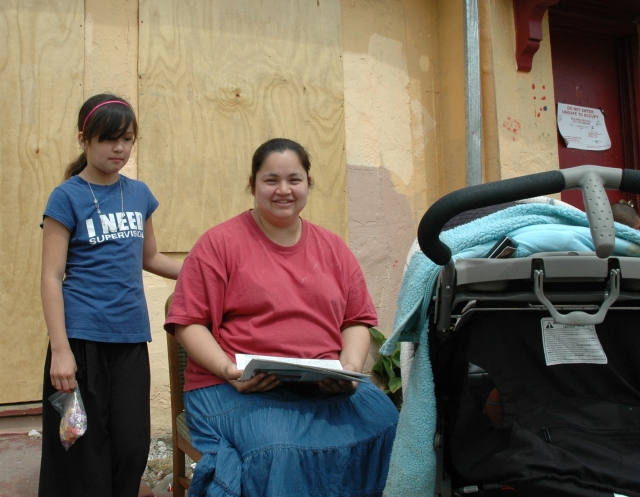 original image (2252x1749)
Judy Rodriguez and her daughter Cheyenne Blanchet are still looking for someplace to move to. Several of the residents told me they were not happy about moving. Even though they complain about the condition of the housing, they felt like they were part of a community and were sad to have to move.
END_OF_DOCUMENT_TOKEN_TO_BE_REPLACED
§Moving Day
by Mike Rhodes 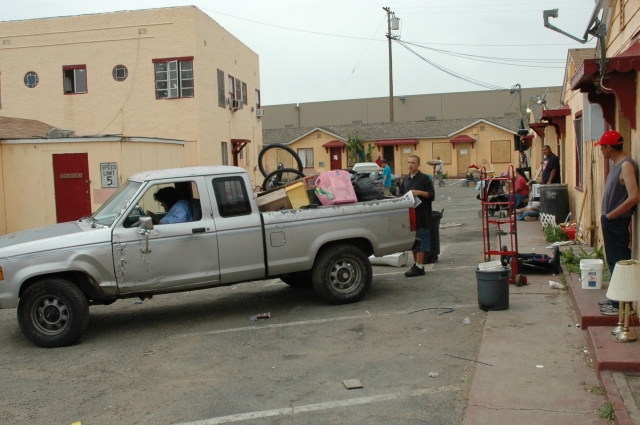 original image (2256x1500)
The person in the truck showed me inside her apartment where there were holes in the doors, black mold in the kitchen, and broken windows. She said there is lead paint throughout the complex and open sewage outside. She suggested that the lack of repairs and maintenance of the Storyland Motel was criminal. 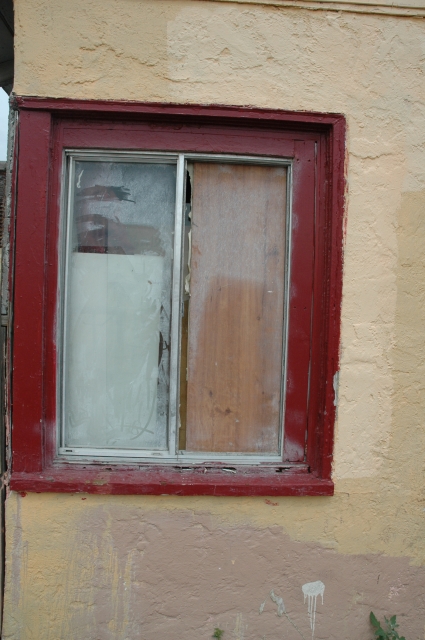 original image (2000x3008)
There were broken windows everywhere. The Storyland Motel was shut down because one resident got tired of her rooms condition and the refusal of the owner to fix things. She called code enforcement and they condemned the building. There are a lot of apartments and motels like Storyland in Fresno. Clearly, the slumlords that own these properties need to be forced to bring them up to code. On the other hand, if the City of Fresno and Code Enforcement were to shut down all units that are not in compliance, the community would soon run out of available affordable housing. This could, in the short term, dramatically increase the number of homeless people in Fresno. In the long run it could motivate the City and County of Fresno to insure that there is adequate affordable housing for everyone who needs it.
END_OF_DOCUMENT_TOKEN_TO_BE_REPLACED
Add Your Comments
Comments (Hide Comments)
§I once lived there.
by Cynthia Manuszak (cynthia.manuszak [at] yahoo.com)
When I was 17, pregnant and new to the area, I lived on Motel Drive. The first of many motels I lived in was the Story Land Motel. I hated it. I met new creatures of this world, cockroaches. I had never seen them before but they shared my new little home with me. They slept in my bed, crawled on my young, pregnant and frightened teenage body and ate my food. The people around me were either in similar situations as I was or just plain lost souls. The only thing I liked about the place was the adorable soilder boy that stood guard at the entrance of the drive-way. I guess the child in me was still seeking comfort through what appeared to be, a giant toy.
My new drug addicted husband was of no help to me, at age 17, I did not know the first thing about being married and truthfully, had no idea that he was slamming dope with some or the other residents of Motel Drive. I got very little sleep because I was either wondering when and if he would come back each time he left or worried that the little creatures would crawl into my ears and eat my brain. Life was definately not easy back then. Exiting out the door for some fresh (?) air would only lead to more confusion, as I seemed to be the new prey for johns that wanted some fun. Pregnant or not, they did not seem to care.
Reading this story, (very well done, Mike) brought back many memories for me as I recapped my own past, residing at StoryLand Motel, and many of the other motels on the strip. That was a long time ago, but the memories never leave. I pray for the mothers and children, expecially, that are enduring the hardships I once did. All I can say is, stay strong, life can get better, believe in yourself, and when you do get out of that life, it is ok to look back. Someone may need you too. God Bless.
Cynthia Manuszak
Add a Comment
§we do alot of work as a general contractor for city code.. willing to give cheap price to
by bush construction & remodeling (remodelingcontractor [at] hotmail.com)
my name is Eric Bush. I am a local general contractor located in the fresno area.

we do alot of work concerning code enforcement violations for city code department
violation notice holders ... we are willing to speak with any officials... the owner of the storyland motel .. media or previous tennants that have any information or would like to get this situation resolved.. we can negotiate a ideal situation for the owner so everyone can get back into thier homes and the owner can resolve this situation .
we can give a guarenteed price that will fit everyones budget to fix this out of control situation....

There is alot of family members that have been affected by this... if anyone reading this
has the means of getting ahold of the owner of the storyland motel we would like to offer him a way to correct the situation at a budget price that will help him so everyone can get back into thier home....

this is an effort to help families in need including the owner of the storyland motel...
if anyne has any questions please feel free to call... any information regarding this place is
welcomed


Thank You
Eric Bush
Bush Construction & Remodeling
Add a Comment
§8 1/2 months preg. with 3 baby boys we were happy to move from our hell
by Jennife G. Hernandez
My three boys and I lived there since Oct.2008 til it was closed,It was the worst place to be,we lived in rm#7 are sewage came up threw the shower,mold everywhere,I didn't know who to call or what to do so I got a hold of legal aid.That opened the doors for us,well it happend,I just didn't get to thank code inforcers,and the city for all there help Thank You All very much.
Add a Comment
Support Independent Media
We are 100% volunteer and depend on your participation to sustain our efforts!