Photo of the Sacramento River below Rio Vista by Dan Bacher. If Governor Arnold Schwarzenegger has his way, a peripheral canal diverting Sacramento River water will be built, resulting in the destruction of Central Valley salmon and delta fish populations. 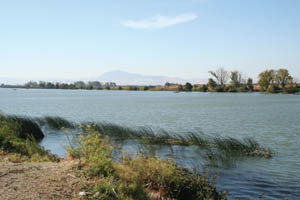 American Rivers, a Washington D.C.-based conservation organization, has named the Sacramento-San Joaquin River system, now in its biggest ever ecological crisis, as the most endangered river in the nation.

The group released "America’s Most Endangered Rivers, 2009 Edition" today. The annual report identifies ten rivers, including the Flint River in Georgia and the Lower Snake River in Idaho, Oregon and Washington, as facing "uncertain futures" and provides an opportunity for the public to act on their behalf.

“Unless we overhaul the way we manage water supply and flood protection on the Sacramento-San Joaquin, the lives of millions of people and the entire economy of the state of California will continue to be jeopardized,” said Rebecca Wodder, president of American Rivers. “It’s time for 21st century solutions to restore the health of these rivers and protect the health, safety and quality of life of Californians.”

American Rivers called on the California Department of Water Resources, the Bureau of Reclamation, Army Corps of Engineers and other "stakeholders" to "invest in 21st century sustainable solutions that protect water supply, farms, and cities, while restoring the health of these great rivers and their estuary."

“The future of California is joined at the hip with the Sacramento-San Joaquin River System,” said UC Davis geologist and American Rivers board member Jeff Mount. “This Most Endangered River listing should be a wake up call to our elected leaders. It’s time to get to work restoring these rivers.”

Mount was one of the authors of last year's highly controversial PPIC report, partially funded by Bechtel Corporation co-owner Stephen D. Bechtel Jr., that endorsed the peripheral canal as a "solution" to California water supply and Delta ecosystem needs.

However, Steve Rothert, Director of American Rivers' California Field Office, emphasized that the organization is not endorsing the peripheral canal. "There is not enough information now available on the potential impacts and benefits of the canal to the Delta ecosystem and its tributaries for us to make an endorsement," said Rothert.

In a policy statement, the group portrays the peripheral canal as a possible alternative to solving the problems of the Delta, the largest estuary on the West Coast of the Americas. In a review that I made of the group's analysis of the canal proposal, it appears that the group is very favorable to the proposal by the BDCP (Bay Delta Conservation Plan) and Schwarzenegger, even though it hasn't officially endorsed the canal.

"One alternative that has emerged in the BDCP process, as well as others, is the construction of what is known as the 'peripheral canal,' which would deliver Sacramento River water along the Delta’s eastern edge to the pumps, circumventing the Delta," the statement reads. "The canal would protect water exports from the vulnerabilities of levee failure and reduce the alteration of water flows created by the current configuration of the pumps."

"A more comprehensive and lasting solution would be to wean municipal and agricultural water interests from their reliance on the Sacramento and San Joaquin rivers," the group claims. "The state must also invest significantly in ecosystem restoration projects and alternative water storage initiatives."

American Rivers acknowledges the "concerns" of Delta residents about the canal. "The peripheral canal proposal was defeated in a state referendum in 1982, and remains controversial today," the organization acknowledges. "Residents along the eastern edge of the Delta are concerned about the effects of a 40 mile long canal with a 1000 foot wide foot print."

The group claims that the current canal is an "improved version" different from the previous proposal. It also said that any canal proposal must include the "co-equal" goals of ecosystem restoration and water supply, appearing to echo Arnold Schwarzenegger and Resource Secretary Mike Chrisman's press releases and news conference statements about the canal.

"The purpose and design of the current canal proposal are improved from the concept defeated more than 25 years ago, but conservation groups fear that once a canal is built, it will facilitate even more unsustainable levels of water exports to the south," American Rivers said. "Any consideration of a canal must first begin with a commitment to water conservation and efficiency efforts throughout the state on a scale not yet attempted. A canal must also come with a coequal purpose of Delta ecosystem recovery and water management."

The group adds, "Finally, such a proposal must include an enforceable framework of governance, regulatory and financial mechanisms that ensures the environmental and water supply goals are met and local interests are addressed."

The organization claims that BDCP and "related strategies" represent "a tremendous opportunity – perhaps the best in a generation – to create a path toward recovery for the Sacramento-San Joaquin system and greater water supply reliability." However, fishing organizations, grassroots environmentalists, Delta farmers and Delta residents disagree strongly with the organization's assessment.

Fishing groups are very critical of any proposal for "restoring" the Delta that involves a canal - and some consider it to be a classic example of greenwashing. They believe that a canal will transfer the impacts of Delta pumping that have killed millions and millions of salmon, steelhead, striped bass, delta smelt, longfin smelt and other species from the San Joaquin River side of the Delta to the Sacramento River.

"The co-equal goals were what doomed the CalFed process," said Jennings. "There is a limited supply of water in California that has been seriously over-allocated. It is a zero-sum game, there is no win-win situation and there is no painless solution to restoring the Delta. The canal will only exacerbate the collapse of Central Valley salmon, delta smelt, longfin smelt and other Delta fish populations."

Jennings ridiculed the report’s reliance upon a Bay-Delta Conservation Plan process that is essentially a massive hydrologic modification of the Delta masquerading as a habitat conservation plan. “BDCP is essentially an end run around the Endangered Species Act,” he said. “It promises take permits, fifty-year guarantees and no surprises in an incredibly complex and degraded estuary while refusing to address how much water the Delta needs to maintain ecosystem integrity or to analyze the costs and benefits of various reduced or zero export scenarios,” he added.

He also took aim at the group's call for an "enforceable framework of governance" on the estuary. "We already have water rights, water quality and endangered species laws and other environmental regulations on the books," he stated. "The failure of state and federal governments to enforce and comply with these laws has led to our current ecological crisis. How will the very same people that ignored and evaded these long-existing laws now magically establish an effective governmental structure to restore the Delta?"

"Imperfect as they are," Jennings emphasized, "we have adequate laws to prevent the Delta collapse, if they’re enforced."

He also criticized American Rivers' assessment of the Delta for being "a sloppy and over simplistic" analysis with no evidence buttressing it. "However, we certainly agree with them that the Delta is indisputably the most endangered waterway in North America," he concluded.

Glen Spain, Northwest Regional Director of the Pacific Coast Federation of Fishermen's Associations (PCFFA), responded to the report's release by saying, "It doesn't come to us as a surprise that the Sacramento-Sacramento River system has been listed as endangered. Everything in them is also endangered, including incredibly valuable salmon runs that support the whole West Coast salmon fishery."

Restore the Delta Calls On Political Leaders to Protect the Estuary

Restore the Delta, a Delta- based coalition including Delta farmers, environmentalists, fishermen, business leaders, the faith community, recreation enthusiasts and everyday folks, reacted to the report by calling on local, state, and federal political leaders to take "broad actions" to protect and restore the Sacramento-San Joaquin Delta.

"The report notes that outdated flood management practices, the 1600 miles of levees that border the San Joaquin and Sacramento River, prevent rivers from spilling over into flood plains," explained Restore the Delta Campaign Director Barbara Barrigan-Parrilla. "Restore the Delta maintains that restoration of flood plains could become the most environmentally sound way to store water for agricultural uses throughout the state, thereby reducing the demand for water exports from the Sacramento-San Joaquin Delta. A permanent and significant reduction in Delta water exports could help to improve Delta water quality and improve fisheries."

"We need a flood management plan, for the protection of people, that ensures that continued urban development does not take place in floodplains," she explained. "We need a water plan that finds ways to augment the water supply in each region, rather than our current practice of shipping water from one part of the state to the other. These are two sides of the same coin."

While Barrigan's organization agrees with American Rivers' findings that excessive water exports of over 6 million acre feet of water per year have lead to the decline and destruction of Delta fish species, the group questions the role of new "conveyance" - the peripheral canal - in solving the problem.

"American Rivers maintains that new conveyance will only work with water conservation and efficiency measures on a scale that has not yet been set in place in California," said Barrigan-Parrilla. "We fear that the planning process that has been set in place (the Bay Delta Conservation Plan) has skipped over putting such conservation programs into place as well as addressing governance for the Delta. They have left out protection for Delta communities from the plan's desired outcomes."

"The question at this point in time should not be from where water should be taken from the Delta. What needs to be answered now is how much fresh water should flow through the Delta for restoration of our fisheries and for improved water quality for Delta communities," stated Barrigan-Parrilla.

The Nature Conservancy, a national environmental organization, endorsed the peripheral canal in January. Let's hope that the American Rivers doesn't follow suit with an official endorsement of the canal in the near future.

The report is funded by Orvis, the oldest mail order company in the US.

To read the report online, go to the following link: http://www.AmericanRivers.org/EndangeredRivers
Add Your Comments
LATEST COMMENTS ABOUT THIS ARTICLE
Listed below are the latest comments about this post.
These comments are submitted anonymously by website visitors.