Add an Event
Newswire
Calendar
Features
Home
Donate
From the Open-Publishing Calendar
From the Open-Publishing Newswire
Indybay Feature
Publish to Newswire
Add an Event
Related Categories: California | U.S. | Global Justice & Anti-Capitalism | Government & Elections
A New Way Forward - Rallies Nationwide April 11th
by kristin hope (omgsoy [at] gmail.com)
Monday Mar 30th, 2009 1:38 PM
On April 11th, groups will organize in major cities nationwide to protest the recent economic crisis and the way our government has responded. The corporate state is here and we need to stop it from spreading. Please get involved and attend a protest or create your own in your hometown. 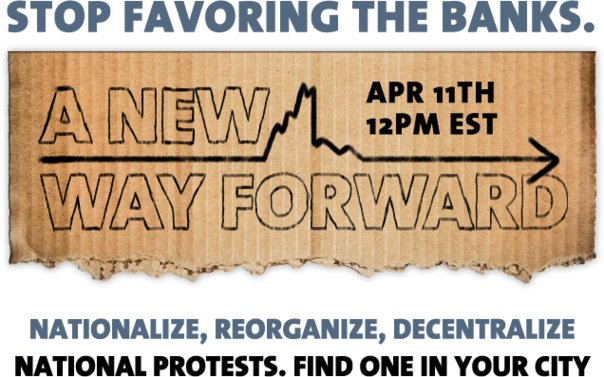 On April 11th, groups will organize in major cities nationwide to protest the recent economic crisis and the way our government has responded. The corporate state is here and we need to stop it from spreading.

The goal of A New Way Forward is this:

"If our government is to take decisive action to rebuild the economy in a way that protects the public, it will require Americans to fight back against this corruption. We must come out in mass to demand a new way forward or things simply will not change.

It's not enough to patch up the current system. We need to restrict the ways that bankers can lobby and serve in the government. We need to prohibit compensation plans that encourages huge short-term risk. We have to break up any bank that's "too big to fail" so that we can have a functional free market. We need serious reform that fixes the root causes in our political and economic system: excessive influence of banks, dangerous compensation systems, and massive consolidation that does nothing to serve the public interest."

"President Obama and if the Democratic leaders in Congress follow along, he'll put the Democratic Party on the wrong side of history. At this critical moment. What we ought to be seeking, the goal of reform, and government aid, is creating a new financial and banking system, of many more, thousands more, smaller, more diverse, regionally dispersed banks and investment firms. That's first obligation is to serve the economy and serve society. Not the other way around. What the administration's approach may be doing is consecrating too big to fail, for starters. Which, of course, everybody in government denied was the policy until the moment arrived. And secondly, and this will sound extreme to some people, but I came to it reluctantly. I fear what they're doing, not intentionally, but in their design is setting the crown for a corporate state."

To get involved and help organize this crucial event, please visit http://anewwayforward.org and find an event in your area, or create your own.
§info
by kristin hope Monday Mar 30th, 2009 1:38 PM 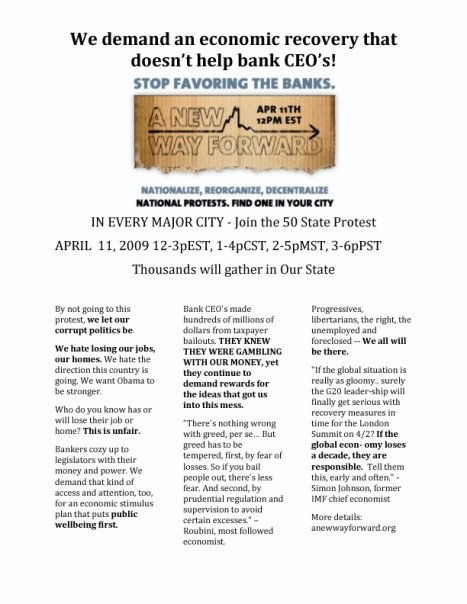