Add an Event
Newswire
Calendar
Features
Home
Donate
From the Open-Publishing Calendar
From the Open-Publishing Newswire
Indybay Feature
Publish to Newswire
Add an Event
Related Categories: San Francisco | Anti-War
SF IVAW Stands in Silence for Fallen Soldiers, Civilians in Iraq
by Cindy Whitman-Bradley
Thursday Mar 19th, 2009 9:01 PM
On the sixth anniversary of the invasion of Iraq, SF Iraq Veterans Against the War members and their allies asked San Franciscans to honor 71 minutes of silence in memory of US service members killed in Iraq since the beginning of the invasion. 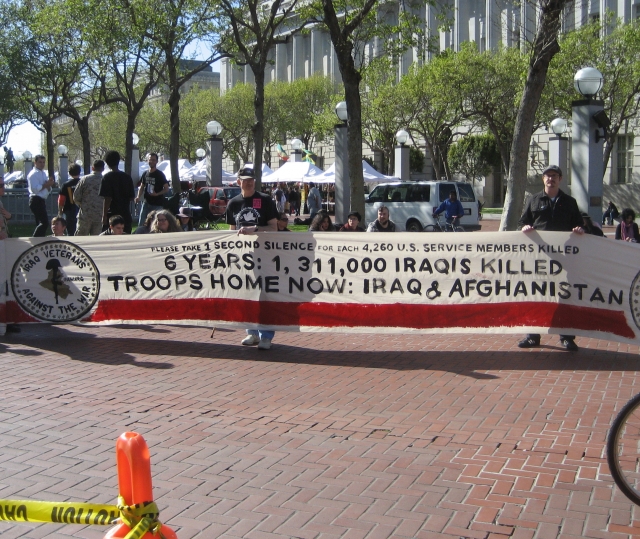 original image (2163x1825)
Blocking Market Street with a banner in honor of American soldiers and Iraqis killed in the war, San Francisco Iraq Veterans Against the War and their allies stood in silence to commemorate the sixth anniversary of the invasion of Iraq.

The gathering asked San Franciscans to give one second of silence for each US soldier killed, hoping the city would respect the 71 minutes in memory of over 4,000 soldiers killed. While crowds gathered along the sidewalk to watch the silent tribute, the San Francisco police gave their notice of arrest, and after 45 minutes handcuffed and arrested five veterans and six supporters.

IVAW organized the protest to bring attention to the continuing occupation of Iraq and Afghanistan and the over one million Iraqi dead and over 4,000 US soldiers killed in the past six years.
§IVAW members stand respectfully in silence across Market Street
by Cindy Whitman-Bradley Thursday Mar 19th, 2009 9:01 PM 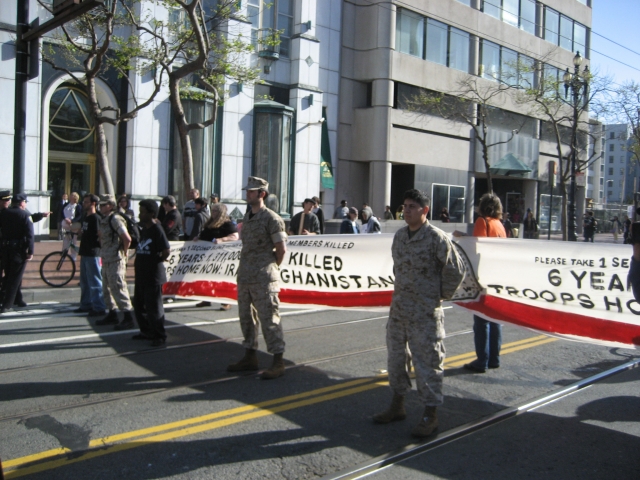 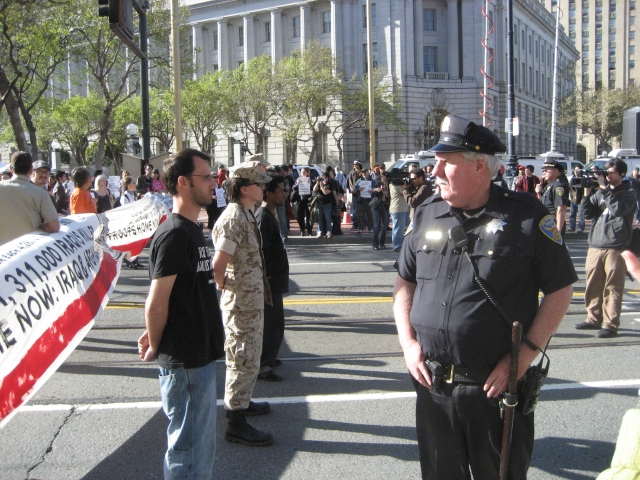 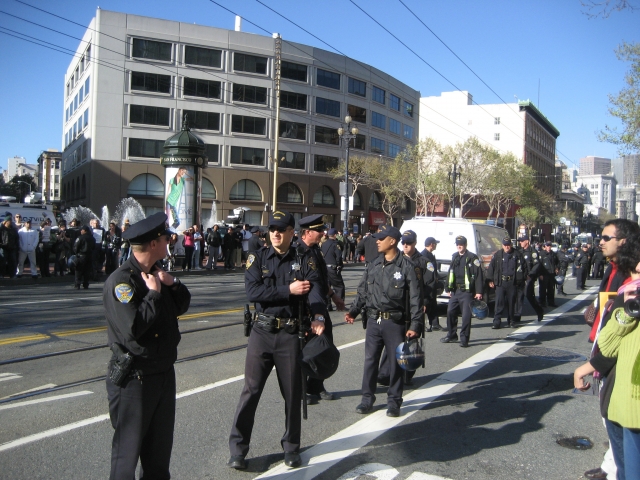 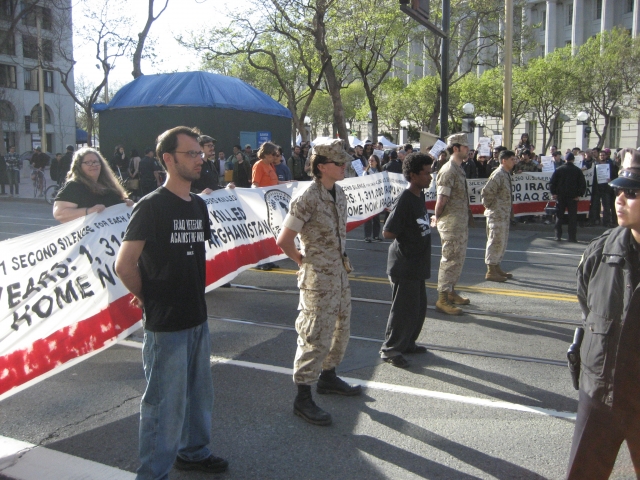 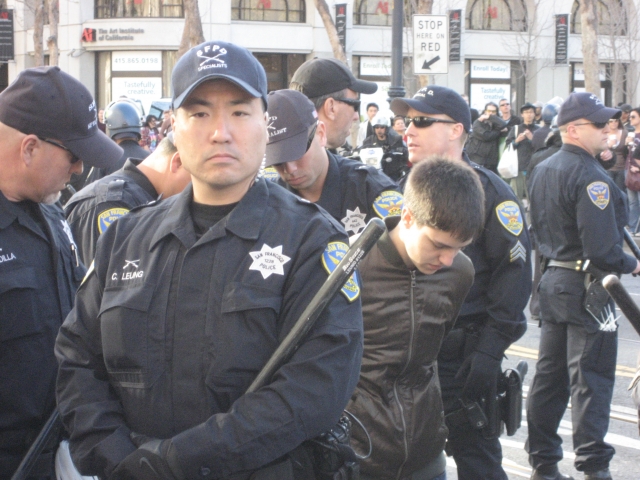 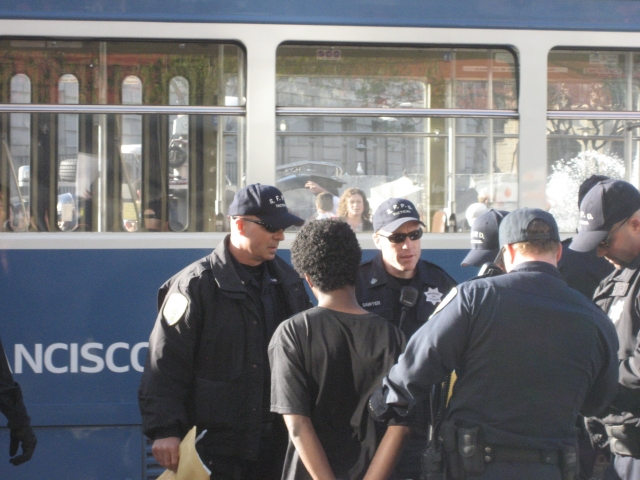 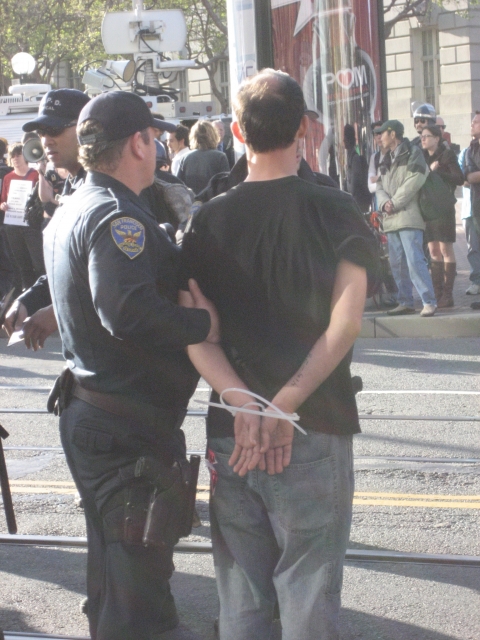 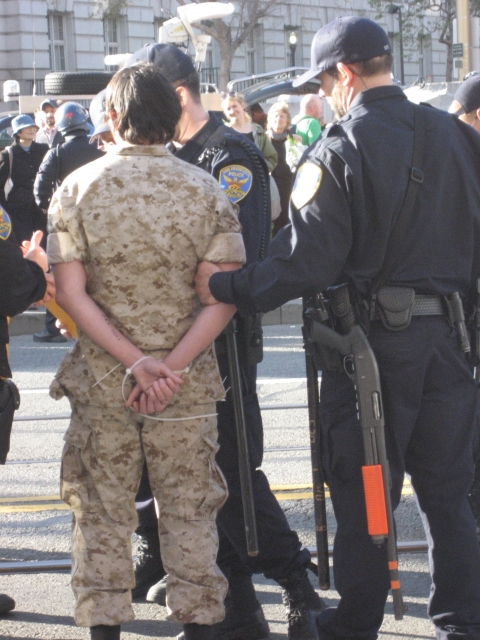 §3/19: 18 people arrested at Market & Montgomery
by +
Friday Mar 20th, 2009 1:50 AM
Some 18 people were arrested at Market and Montgomery for doing a die-in on the street, blocking traffic for most of the lunch hour from 12 p.m. to 1 p.m. on March 19, 2009 as part of the day's anti-war activities in San Francisco. The hour started when about 50 police stood in front of the Bank of America building at Market and Montgomery, diagonally across Market Street from the peace rally where there may have been 50 peaceniks. There were at least a dozen light motorcycles parked nearby, and around the corner on New Montgomery, another dozen police cars with more police on the sidewalk by the Bank of America. This protection of private property and private profits with our tax dollars to the tune of at least $80,000 a year and up for each cop, plus all the hardware and all the vehicles, ended around 12:30 p.m. as the police moved the very expensive vehicles out of the area and lined up on Market Street to arrest the die-in participants. A good-sized crowd watched this whole show. Most people had no idea that this was the 6th anniversary of the illegal US invasion and occupation of Iraq.
Add a Comment
Support Independent Media
We are 100% volunteer and depend on your participation to sustain our efforts!