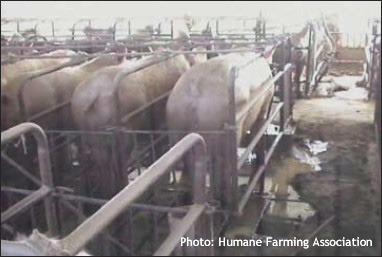 There is stunning news in the animal advocacy world, particularly for those of us who have been working in the field for years and remember the days when it was hard to find a news story that even touched on the cruelty to animals being documented by activists. This coming Monday, March 16, HBO will premier a documentary called "Death on a Factory Farm." According to the HBO synopsis, "'Death on a Factory Farm' follows the undercover investigation of Wiles Hog Farm by the animal rights group The Humane Farming Association (HFA), and the resulting court case against it." The industry magazine, "Pork," reports with apprehension that the documentary will run on HBO twenty times through till April 1.
You'll find the full schedule at http://www.hbo.com/apps/schedule/ScheduleServlet -- just enter the documentary title into the search line on that page.

The Time Magazine web site currently has a terrific story on the issue -- an interview with, and photo of, 'Pete,' the undercover investigator and animal advocacy hero, who worked at the farm and videotaped the horrors. Many of us already know him from his previous undercover work that formed the basis of an earlier HBO documentary, "Dealing Dogs." The interview with Pete is on line at http://www.time.com/time/nation/article/0,8599,1883742,00.html
News outlets pay close attention to which stories get the most clicks and forwards, so please check it out and then go the bottom of the page where it says "Connect to this Time Story" and click on "Email," and email the page to all of your friends. You can also leave a comment on that page. Please do.

The HBO home page for this documentary is:
http://www.hbo.com/docs/programs/deathfactoryfarm/index.html
It includes links to pages where you can watch a brief preview video, read an interview with the multi award winning producers of the documentary, and read a synopsis of the film. The opening lines of the synopsis make the point that the film apparently drives home beautifully:

"Each year, ten billion animals are raised for consumption in the U.S., mostly on sprawling, industrialized farms, where virtually no federal laws mandate how the animals are treated - though guidelines exist - and state laws are ineffective. As a result, animals are frequently subjected to what many consider cruel treatment and inhumane conditions in the interest of economic efficiency."

We learn about the undercover video:
"Over the course of six weeks, Pete secretly filmed numerous disturbing scenes, including piglets being tossed into crates from across a room, impregnated sows held in pens that don't allow them to move, an unhealthy piglet being slammed against a wall to euthanize it, and a sick sow being hung by a chain from a forklift until it choked to death."

Will you forgive my turn of phrase if I write that the factory farming industry folks are crapping themselves in anticipation of this movie? (I did edit myself slightly.) The industry's general position is that the cruelty on this farm was an aberration. But while we don't yet have video from other farms of pigs being hung to death or slammed against concrete floors, some of the chronic cruelty, such as keeping the huge and intelligent animals in tiny individual pens too small to let them turn around or even lie down with their legs outstretched, is standard industry practice. Such cruelty is not limited to the pork industry -- most of us know about battery cages and veal crates, for example. Beef Magazine therefore reports at http://tinyurl.com/d3cfbc (my thanks to Mary Finelli for that link):

"For any of us the agriculture industry, this documentary sends shivers down our spines.... To put things into perspective, HBO has an estimated 35 million subscribers, and a premier program on HBO can reach between 1 to 3 percent of that audience, or about 500 thousand to 1.5 million people."

The Beef Magazine writer recommends to readers:
"I encourage all of you to tune in to this documentary, and follow up with letters of response to the producers and to HBO."

I always stress the importance of letting media outlets know how much we, the audience, appreciate their animal friendly content. With the meat industry calling for mobilization against HBO on this one, appreciative feedback from the audience becomes doubly important. Please send HBO a supersized thank you. Comments on HBO documentaries should be submitted at http://tinyurl.com/d6og4

You can also make sure that everybody who reads your local paper knows about the show. Some of the smaller papers publish close to 100% of letters they receive. The five minutes it takes you to send a quick note could help teach thousands of people in your area about the horrors of the modern food production system. As the show will air through the rest of the month you still have time to write now. Why not?


(DawnWatch is an animal advocacy media watch that looks at animal issues in the media and facilitates one-click responses to the relevant media outlets. You can learn more about it, and sign up for alerts at http://www.DawnWatch.com. You may forward or reprint DawnWatch alerts if you do so unedited -- leave DawnWatch in the title and include this parenthesized tag line. If somebody forwards DawnWatch alerts to you, which you enjoy, please help the list grow by signing up. It is free.)

Please go to http://www.ThankingtheMonkey.com to read reviews and see a fun celeb-studded video and an NBC news piece on Karen Dawn's new book, "Thanking the Monkey: Rethinking the Way we Treat Animals," which was chosen by the Washington Post as one of the "Best Books of 2008."