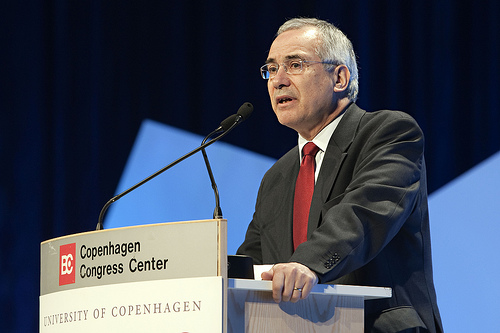 The International Scientific Congress on Climate Change, comprising 2,500 delegates from nearly 80 countries, met in Copenhagen from 10-12 March and issued a six point final summary warning that "the climate system is already moving beyond the patterns of natural variability" including changes to "global mean surface temperature, sea-level rise, ocean and ice sheet dynamics, ocean acidification, and extreme climatic events." The statement warns thar "There is a significant risk that many of the trends will accelerate, leading to an increasing risk of abrupt or irreversible climatic shifts."

The scientists warned political leaders who will meet later this year at the UN Climate Change Conference in December 2009 to thrash out the next international climate treaty that "weaker targets for 2020 increase the risk of crossing tipping points and make the task of meeting 2050 targets more difficult. Delay in initiating effective mitigation actions increases significantly the long-term social and economic costs of both adaptation and mitigation."

Nicholas Stern, who wrote the pivotal study on the likely economic effects of climate change for Britain, told the conference that scientists needed to make clear to politicians and the public the likely consequences of global mean temperatures increasing. "There has been lots of scientific information on 2.0 and 3.0 degrees Celsius (3.6 and 5.4 degrees Fahrenheit), but you have to tell people loudly and clearly just how difficult 4.0 or 5.0 would be," he said.

The Intergovernmental Panel for Climate Change 2007 report predicted an increase by 2100 of 1.1 to 6.4 C. Many scientists consider that more than 2 degrees temperature increase would be dangerous, with 0.8 degree warming aleady present and a further 0.6 degree of warming already locked in to the climate system. Rates of green house gas emissions indicate that the worst case models from the IPCC 2007 report are already being achieved.

James Hansen, director of NASA's Goddard Institute for Space Studies has been warning about greenhouse gas emissions and climate change for two decades. He argues that the concentration of greenhouse gases, predominantly carbon dioxide (CO2), needs to be reduced to 350 parts per million. The current level is 385 ppm and still rising. "We are actually going to have to decrease the amount of CO2 in the atmosphere," he said in an AFP news report. He has called for a ban on all new coal fired power stations and carbon capture and storage technology fitted to existing plants.

Hansen is critical of the effectiveness of the carbon cap and trade system aleady implemented in Europe and being proposed for the USA and Australia. He strongly argues for a carbon tax on fossil fuels arguing that if such a tax were imposed in Europe, United and China, most other countries would soon follow.

While scientists are coming to terms with the need to communicate the risks and threats in climate change with politicians and the public, climate protests are escalating. On March 10, 340 Greenpeace activists from 20 countries blockaded European Finance ministers in a building in Brussels for several hours. The activists were highlighting the failure of ministers to commit to funds for carbon emissions reductions and climate change adaptation measures in the developing world. Banners that were carried said 'Sav€ the Climate' and 'Bail out the Planet'. The police eventually arrested everybody, with 4 people hospitalised according to Emily Hall's account on Greenpeace UK.

"Finance ministers are giving billions of taxpayers' money to failed banks, but we're here to make sure they also put money on the table to tackle climate change," said Thomas Henningsen, a campaigner with Greenpeace International. "If the planet were a bank, they would bail it out." he told euobserver.com

Recent observations confirm that, given high rates of observed emissions, the worst-case IPCC scenario trajectories (or even worse) are being realised. For many key parameters, the climate system is already moving beyond the patterns of natural variability within which our society and economy have developed and thrived. These parameters include global mean surface temperature, sea-level rise, ocean and ice sheet dynamics, ocean acidification, and extreme climatic events. There is a significant risk that many of the trends will accelerate, leading to an increasing risk of abrupt or irreversible climatic shifts.

The research community is providing much more information to support discussions on "dangerous climate change". Recent observations show that societies are highly vulnerable to even modest levels of climate change, with poor nations and communities particularly at risk. Temperature rises above 2oC will be very difficult for contemporary societies to cope with, and will increase the level of climate disruption through the rest of the century.

Rapid, sustained, and effective mitigation based on coordinated global and regional action is required to avoid "dangerous climate change" regardless of how it is defined. Weaker targets for 2020 increase the risk of crossing tipping points and make the task of meeting 2050 targets more difficult. Delay in initiating effective mitigation actions increases significantly the long-term social and economic costs of both adaptation and mitigation.

Climate change is having, and will have, strongly differential effects on people within and between countries and regions, on this generation and future generations, and on human societies and the natural world. An effective, well-funded adaptation safety net is required for those people least capable of coping with climate change impacts, and a common but differentiated mitigation strategy is needed to protect the poor and most vulnerable.

There is no excuse for inaction. We already have many tools and approaches - economic, technological, behavioural, management - to deal effectively with the climate change challenge. But they must be vigorously and widely implemented to achieve the societal transformation required to decarbonise economies. A wide range of benefits will flow from a concerted effort to alter our energy economy now, including sustainable energy job growth, reductions in the health and economic costs of climate change, and the restoration of ecosystems and revitalisation of ecosystem services.

To achieve the societal transformation required to meet the climate change challenge, we must overcome a number of significant constraints and seize critical opportunities. These include reducing inertia in social and economic systems; building on a growing public desire for governments to act on climate change; removing implicit and explicit subsidies; reducing the influence of vested interests that increase emissions and reduce resilience; enabling the shifts from ineffective governance and weak institutions to innovative leadership in government, the private sector and civil society; and engaging society in the transition to norms and practices that foster sustainability.