Add an Event
Newswire
Calendar
Features
Home
Donate
From the Open-Publishing Calendar
From the Open-Publishing Newswire
Indybay Feature
Publish to Newswire
Add an Event
Related Categories: U.S. | Racial Justice
Bergamo(Italy)- the parade fascist of Forza Nuova
by The board
Wednesday Mar 4th, 2009 9:57 AM
The greeting of the fascist priest Lefebvre
He is Don Giulio Tam, Lefebvre father who is called "itinerant Jesuit." Last Saturday, the priest has marched, alongside Roberto Fiore, head of the procession of Forza Nuova Bergamo. 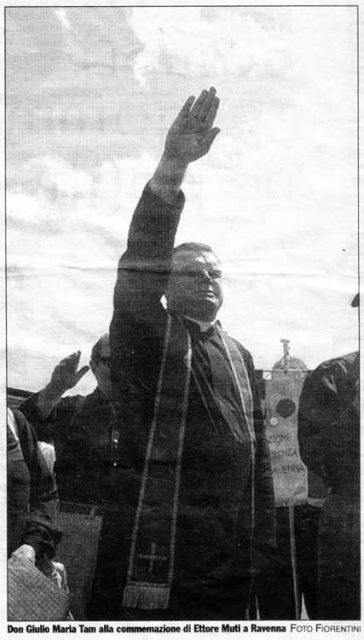 original image (427x750)
Paul Berizzi
...And the priest blessed the room with the Roman salute. He is Don Giulio Tam, Lefebvre father who is called "itinerant Jesuit." Last Saturday, the priest has marched, alongside Roberto Fiore, head of the procession of Forza Nuova Bergamo: rather a military parade, with "forzanovisti" militants who have marched through the streets of the center equipped with helmets and metal sticks. Among Roman greetings, "who spring Executioner" and some "Sieg Heil", the event has accompanied the inauguration of the new extreme right headquarter.

In the afternoon there were tough fights between police and community centers antagonists in a presidium meeting of protest: the video of the couple taken in by police truncheons have been shown around the web. In addition to measures for the perpetrators of the incidents, the neo-fascist march will have a trawl judiciary is ready another shower of complaints of those who marched with helmets and sticks. And to discuss now is the presence of Don Giulio Tam.

In one of the photos published by the newspaper online http://www.bergamonews.it you see the priest in black shirt, "which he performs in the Roman salute in front of a hundred comrades marching in ranks, many faces covered. At his side, the national secretary of Forza Nuova, Roberto Fiore, the National Coordinator Paul Caratossidis, and the responsible provincial Dario Macconi, the son of the Lombardy Regional Council, and chairman of the provincial Bergamo An, Peter Macconi.

Born in Valtellina, Giulio Tam is the grandson of Angela Maria Tam, shot by partisans in 1945. Chaplain of right group, already proposed by Alternative Social at the last European elections, has never made a mystery of its traditionalism and has fought against the positions of "historic reconciliation" expressed by Gianfranco Fini.

http://lombardia.indymedia.org/node/14594
Add Your Comments
§Where is the opposition?
by Gary Rumor
(GaryCy [at] peoplepc.com) Wednesday Mar 4th, 2009 10:40 AM
Where is the opposition to this? When Nazi's or fascists try to march here in the USA we stop them, we confront them, we chase them away. They have to hide behind the police to even stand in public. I am surprised there is so much tolerance for such things considering Italy underwent a fascist dictatorship.
http://Garyrumor.com
Add a Comment
§beeeeeeeeeeeeeeeeeeep
by The board
Wednesday Mar 4th, 2009 11:18 AM
the fascists in Italy have been funded by the CIA against the communist bloc in the Cold War as the dictatorships of South America. The opposition is false as all the Italian Parliament. Saturday italians antifascists were beaten by the police who had protected the fascists in the parade.
The one media and information holder is the Prime Minister Silvio Berlusconi, an old friend of bush
Add a Comment
Support Independent Media
We are 100% volunteer and depend on your participation to sustain our efforts!