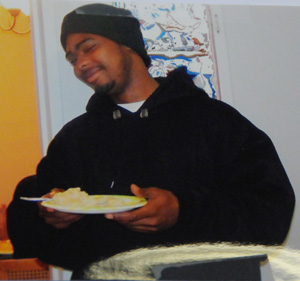 Oscar Grant III would have been 23 year's old today. Broken hearted family and friends mourn today a young black life taken away by the public policy of police containment and terror against the African community.

It is very moving that there are friends and family members and organizations holding actions to honor his life. The Uhuru Movement is calling on people honor Oscar Grant's too short life by getting involved in the movement for justice for the African community.

This Sunday, March 1st at 2pm, the Chairman of the African People's Socialist Party and founder of the Uhuru Movement, Omali Yeshitela will be speaking on "US War, Economy in Crisis and Police Terror Against the African Community" at the Uhuru House, 7911 MacArthur Blvd in Oakland. Support the independent voice and movement of the African working class. Participate in the long term strategy of the Uhuru Movement for freedom and independence for African and oppressed peoples. Join in solidarity with the struggle to overturn a filthy rotten system that would take the life of this young man in his prime and countless others in Oakland, in the U.S. around the world. Let's destroy the system that is already in a state of collapse that is built on slavery and genocide and let's participate in building a new world. Hear the vision of the Uhuru Movement and get involved. Call (510) 569-9620 for more info, for transportation to the event or for more information. Email oakland [at] uhurusolidarity.org
http://uhurusolidarityoakland.blogspot.com/
Add Your Comments
LATEST COMMENTS ABOUT THIS ARTICLE
Listed below are the latest comments about this post.
These comments are submitted anonymously by website visitors.