Add an Event
Newswire
Calendar
Features
Home
Donate
From the Open-Publishing Calendar
From the Open-Publishing Newswire
Indybay Feature
Publish to Newswire
Add an Event
Related Categories: California | East Bay | Santa Cruz Indymedia | U.S. | Animal Liberation | Police State & Prisons
5 Reasons for Activists to Cover Their Faces at Protests
by Will Potter (repost)
Monday Feb 23rd, 2009 11:26 AM
“If activists have nothing to hide, why are they wearing masks?” 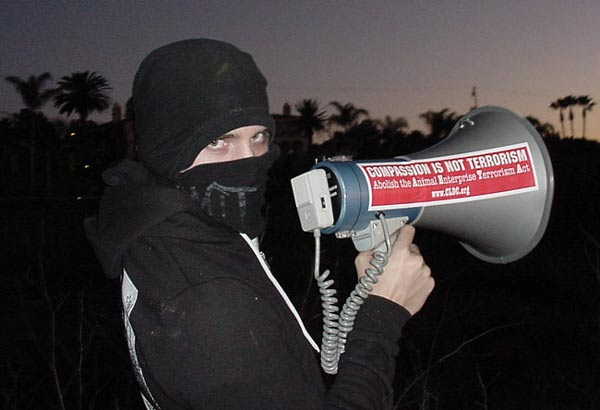 I’ve heard that question over and over again. It usually comes in the form of a soundbite from someone affiliated with a corporation, industry or government agency that is attempting to smear lawful activists as “terrorists.”

Their reasoning goes something like this: If you aren’t doing anything wrong, you have no reason to hide your face. If you are hiding your face, it’s an admission of criminal activity. Therefore, wearing a mask justifies rounding up lawful activists as “terrorists.”

That’s exactly what happened in the recent arrests of four activists on Animal Enterprise Terrorism Act charges in California. The FBI argues that activists “wearing bandanas to hide their faces” were intimidating, and that this therefore amounted to a campaign of terror.

To those not familiar with grassroots activism, that might seem like a pretty reasonable point. Masks are generally associated with bandits, ninjas and Hamburgler, all of which are quite intimidating. So, why would someone want to cover their face at a protest?

In this political climate, many activists have told me they face a difficult decision. If they take to the streets and protest on a controversial campaign (especially a campaign that has involved both legal and illegal tactics), they risk this surveillance, harassment and intimidation.

If they don’t take to the streets, they are compromising their beliefs and remaining silent about the things that matter.

For many, a solution has been to continue protesting on these campaigns, but with masks covering their faces. It clearly isn’t always the best solution. It can alienate and isolate everyday people who might otherwise be open to the message of the protest.

It clearly infuriates the feds that activists want to protect their identities while continuing to advocate for what they believe. A Joint Terrorism Task Force has even gone so far as to arrest an animal rights activist on felony charges for wearing a mask at a protest.

It would be a mistake, though, to blindly buy the FBI rhetoric. Wearing a mask may or may not best campaign decision for activists. But wearing a mask doesn’t mean activists are guilty, or that they are “terrorists.” For many activists, it simply means they don’t trust FBI agents and corporations. The developments of the last few days have shown they have good reason to feel that way.

http://www.greenisthenewred.com/blog/2009/...
Add Your Comments
LATEST COMMENTS ABOUT THIS ARTICLE
Listed below are the latest comments about this post.
These comments are submitted anonymously by website visitors.