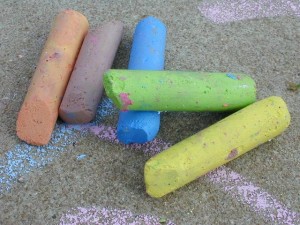 It was only a matter of time. Since the passage of the Animal Enterprise Terrorism Act, a sweeping new law labeling animal rights activists as “terrorists,” corporations and industry groups have been pushing the federal government to use their new powers. For more than two years, the law has sat on the shelf. The government has finally put it to use.

On February 19th and 20th, the Joint Terrorism Task Force of the FBI arrested four animal rights activists as “terrorists.” Details of the arrests and the charges are still coming, but based on my conversations with attorneys and local news articles, this is the most sweeping expansion of the War on Terrorism and the “Green Scare” to date.

As background, a fierce campaign is being waged in California against animal research at the University of California system. There has been a wide range of both legal and illegal tactics. Illegal tactics have included the destruction of UC vans. In August, an incendiary device was left at the home of a UC researcher; no animal rights group has claimed responsibility for this crime, but the university, the FBI and others have recklessly attributed it to activists.

These “terrorism” arrests are not related to that bombing, though. And they’re also not related to the destruction of property. These activists–Nathan Pope, Adriana Stumpo, Joseph Buddenberg, and Maryam Khajavi– were arrested for First Amendment activity.

My calls to the FBI for a copy of the indictment have not been returned, and attorneys I’ve contacted have not viewed it either. However, the FBI’s press release notes that the activists are facing four charges, and lists four incidents. They include:

Chalking, leafleting and protesting are not terrorism, they are not property crimes, and they are not violent crimes. They are speech. Unlike real terrorists, these defendants are not accused of arming themselves with bombs or machine guns. Their only weapons are words.

The only allegation of possible criminal activity is the FBI’s mention of a forced entry. The details of that incident are unclear, though. For instance, at many lawful home protests in the past, activists have been attacked by the people they are protesting who, understandably, are not happy about a demonstration right outside their front door. In short, the very worst element of the entire set of allegations is nowhere near any reasonable person’s threshold for what constitutes “terrorism.”

When I testified before Congress about the Animal Enterprise Terrorism Act, I was attacked by supporters of the bill, including Democrats, who said the law would only be used to go after groups like the Animal Liberation Front and Earth Liberation Front. I argued that the vague and overly broad wording in the law could be used by an ambitious prosecutor or federal agents to target First Amendment activity. Eerily, the hypothetical case I described is identical to the recent arrests. I wrote in my analysis of the AETA in 2006:

Here’s a very likely scenario: A group of activists holds a loud protest outside an executive’s home or office on a daily basis, as part of a national campaign. Activists yell and chant as people enter the building. Some wear masks or bandanas (which are increasingly common at protests, because activists fear being “blacklisted”). There have also been illegal actions like “vandalism” and “property damage” in the name of the same cause (which has been the case in every social movement, ever).

Activists clearly intend to “interfere with” the operations of animal enterprise. Toss in the climate of fear that industry groups have created, plus the raucous nature of the protest and the fact that it’s part of a coordinated campaign, and suddenly this First Amendment activity becomes “terrorism” under the law (through a “course of conduct” involving harassment, intimidation, vandalism… whatever they can get to stick).

This is, verbatim, what the FBI and prosecutors are alleging in this case. These arrests dispel each and every myth by corporations and the politicians who represent them, and make strikingly clear that the true purpose of the Animal Enterprise Terrorism Act was never to target underground activists. It was passed in order to chill and overtly silence First Amendment activity.

At issue here is not the validity or morality of animal research, nor is it the efficacy of controversial tactics. Differences of opinion on those issues no longer matter. What’s at issue is whether the War on Terrorism should be used to target protesters as terrorists.

The true test of the health of the First Amendment, and basic freedoms in a democracy, is not whether safe, non-controversial, popular beliefs are protected. The test is whether the extreme, the radical, the outlandish, the offensive and the crude are protected.

When it comes to freedom of speech, the battleground–the front line–must be protecting the fringe. 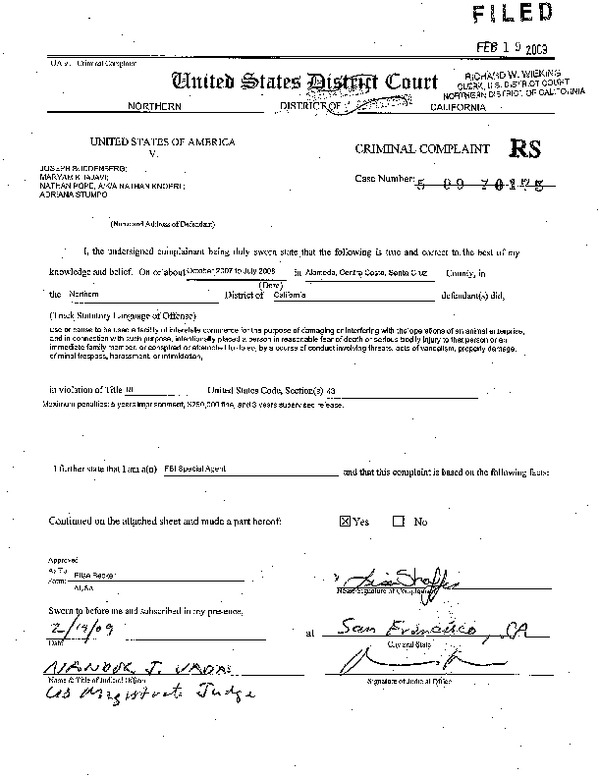 Download PDF (252.9KB)
When I first reported on the arrest of four animal rights activists in California under the Animal Enterprise Terrorism Act, few details were available. The only information was the FBI press release (which mainstream media outlets have regurgitated nearly verbatim as news articles). I now have a copy of the criminal complaint written by FBI special agent Linda Shaffer (who specializes in “eco-terrorism”), and it has some more details of the case.

The activists were arrested, in the very first use of this sweeping law, for activity like “chalking defamatory slogans,” creating fliers, protesting while wearing masks, and attending a protest where an alleged attempt at forced entry took place. I was hoping that the criminal complaint would reveal something, anything, to justify such serious “terrorism” charges.

Instead, it reveals how scarce anti-terrorism resources are being squandered on surveilling and investigating First Amendment activity.

Here are a few highlights:

The only mention of actual criminal activity in the entire criminal complaint is when Shaffer describes an incident at a protest at the home of “Professor Number Eight.” The professor’s husband says he “heard loud banging on the glass pane on the door” and saw “the door handle being twisted back and forth.” He opened the door, yelled at activists, and struggled with someone, and then he says he was hit with a “dark, firm object.” He recorded a license plate number from a car at the protest and gave it to the police, and police linked the car to one of the defendants.

At the very worst—assuming we believe everything this researcher and the FBI are saying—that is obviously not First Amendment activity. But it’s critical to note that the FBI is not alleging that any of the defendants attempted a forced entry, or that any of the defendants struck this researcher. Read the complaint for yourself. The FBI argues that these activists were present at this protest, and that their presence makes them terrorists.

Let’s think about this guilt-by-association reasoning from another perspective. I was covering an antiwar protest a few years ago, and I was beaten by police while wearing my Congressional press credentials (a lawsuit was later settled out of court). I was attacked by a few cops, but there were many more at the protest. Let’s apply the same FBI logic to my personal experience: if DNA testing could link riot gear to cops who were at that protest, would the government hold all of them responsible for my attack?

http://www.greenisthenewred.com/blog/2009/...
Add Your Comments
Support Independent Media
We are 100% volunteer and depend on your participation to sustain our efforts!