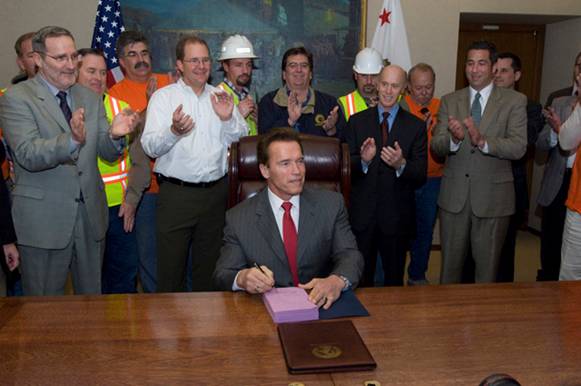 In a highly choreographed media event today, Governor Arnold Schwarzenegger signed what he described as an "historic" bipartisan budget package to "solve" California’s $42 billion deficit - a budget that includes unprecedented cuts to the state's public health, environmental, education and other essential programs.

The signing took place after the longest session in California history, a marathon 45.5 hours. At 6 a.m. on Thursday morning, the Senate finally managed to pass the budget package it had been debating since Saturday night after Republican Senator Abel Maldonado from Santa Maria extracted a series of concessions from Democratic lawmakers in exchange for his vote.

Schwarzenegger claimed the budget "takes the necessary steps to reduce spending, bring in new revenue, improve our business climate and create jobs, and make government more efficient." Additionally, the Governor touted his use of his line item veto authority to achieve nearly $1 billion more in General Fund (GF) savings for the state.

“We have achieved a great victory for California today," Schwarzenegger claimed. "By staying focused on what was best for the people of our state and not the special interests, we were able to come together and solve our $42 billion deficit and also find meaningful and lasting solutions to our broken budget system. During a down economy and facing an historic budget deficit we had to make some very difficult decisions, but I am very proud that California is back on the best path forward. We will continue to work with our most important partners - the people of our great state - to ensure we never again face the kind of catastrophic budget scenario we experienced this year."

He also contended that the budget "includes meaningful and lasting reforms for California that will strengthen our rainy-day fund, open up primary elections and eliminate legislative pay raises during deficit years."

However, Tina Andolina, Legislative Director for the Planning and Conservation League, blasted the budget and budget process for being "flawed" and "broken.

"This entire process, from the backroom negotiations to the extortion by one senator, clearly shows that our system is broken," said Andolina. "California's financial stability should never again be held hostage by a small handful of individuals determined to pursue their own ideological agenda."

"Because of the demands made by the Republican legislative leaders, policies that had nothing to do with the budget were ultimately included in the package and will now have repercussions above and beyond the severe cuts to public transportation, schools, and social services," Andolina emphasized. "Delaying implementation of regulations to clean up polluting diesel construction equipment will mean dirtier air, increased lung and heart disease, and higher health care costs."

She also said the package also includes several exemptions to the California Environmental Quality Act (CEQA) that will "further exacerbate our air pollution problems and hamper the fight against global warming while shutting people out of the process of deciding the future of their communities."

She castigated the Republican Legislators, the "Pirates of the Capitol," for holding the state hostage for months to the whims of their ideology.

"A handful of legislators, who are so clearly out of step with mainstream Californians, have tried several times to win these types of concessions," said Andolina. "When they try it in the light of day, they get a backlash from the public. So instead they held us all hostage, standing by as more and more Californians lost their jobs and we inched ever closer to financial chaos. In the end, the ransom was paid - and we'll keep paying with our lives and lungs."

"We can never let this happen again. We must reform how we do business," she concluded.

Andolina's analysis of the budget and budget process is superb. I agree totally with her that we can never again allow this budget fiasco to happen and we must use this fiscal disaster as a wake up call to dramatically change how business is conducted in Sacramento.

The irony of these Republican Legislators holding the state hostage is that these are the same "borrow and spend" big government advocates who are campaigning with Schwarzenegger and Senator Dianne Feinstein to build a peripheral canal and more dams through an enormously expensive and environmentally devastating water bond. The proposal would cost an estimated $12 billion to $24 billion, indebting the state's taxpayers for years to come. When the state is in such a huge fiscal crisis, how can they campaign for such a big pork barrel project?

Schwarzenegger and the Republican Legislators are cutting existing environmental and health programs while supporting a water bond boondoggle that would result in pushing Central Valley salmon, delta smelt, longfin smelt, green sturgeon and other species over the edge of extinction. The federal government's Pacific Fishery Management Council this week released data showing that 2008's Central Valley salmon run was the lowest on record, pointing to yet another year of recreational and ocean salmon fishing closures off California and Oregon and in Central Valley rivers.

"Although ocean conditions play a role in the salmon collapse," said Bill Jennings, executive director of the California Sportfishing Protection Alliance, "the biggest factor is the operation of the state and federal government's Delta pumps and the lack of water going though the California Delta. If you want to protect the salmon and other fish, you need to shut down the pumps and maintain Delta outflows."

However, the peripheral canal would only create the infrastructure to export more water to corporate agribusiness when less exports are what's needed to restore salmon and other fish populations.

The budget plan used to "solve" the state's $42 billion deficit was built upon the framework outlined by Governor Schwarzenegger last year - what he called the "four-legged stool" of spending reductions, revenue increases, economic stimulus and "making government more efficient."

Leg #1 would include $14.9 billion in spending reductions below current-year spending over this and the 2009-10 fiscal years. Again, Schwarzenegger is slashing $14.9 billion from existing programs when he continues to push for a canal/dams boondoggle that would cost an estimated $12 billion to $24 billion!

The cuts include $8.4 billion in reductions to education, $1.6 billion from health and human services and $1.4 billion from the state employee payroll through furloughs, reductions in overtime, and elimination of some state holidays.

Leg # 2 would include $12.5 billion in General Fund benefit over both current and 2009-10 budget years. To review the fact sheet put out by the Governor's Office, go to http://gov.ca.gov/fact-sheet/11512/. Unfortunately, this document doesn't include a break down of how specific Departments, such as Cal EPA and the Department of Fish and Game, will be specifically impacted.

Arnold Schwarzenegger has played a number of roles in his career as Governor. He has played the "Green Governor," spouting off at every opportunity he can about "climate change" and "green energy," while at the same time acting as the "Fish Terminator" while presiding over the collapse of Central Valley salmon and Delta fish populations. Today he played yet another role - "Arnold the Budget Slasher."

§Where taxpayer money is going--including the Stimulus CASH?
by Brittanicus
Friday Feb 20th, 2009 7:46 PM
Senator Harry Reid (Dem-NV) showed his true colors by killing the E-Verify system in the Stimulus bill. He must be receiving large Campaign contributions from the Un-American Chamber of Commerce, predatory businesses, the anti-American ACLU and Special Interest lobby. Nevada! Remember this Senator who has used his power in Congress to Tax you even more, vote him out, when he runs for office again--or even recall him--NOW!

Population stabilization (caps web.org ), a pro-sovereignty group in California has concluded their own investigation and determined that their is a least 40 million nationwide? So who is telling the truth and who is financially supporting all these foreign nationals thats paralyzed the state? YOU ARE! How much is the cost to support thousands in our prison system, for education and health care? California is just one state anchored down, because the elected officials ignored the overwhelming peril over three white house administrations of illegal immigration. Gov. Arnold Schwarzenegger, the state legislators, city Mayors have done absolutely nothing to stop the support of illegal immigration in California and this goes for elected officials around the country.


We have one last chance for all Americans and legal residents to fight back against unfair taxes. We still have time to back Senator Sessions and other honest lawmakers before the deadline this March 6? We need E-Verify with its mandated success rate of 99.6 percent in perpetuity, not just 5 years? It will stop the illegal Immigration invasion for good!

Jam the Washington Switchboard at (202) 224-3121 In addition you can call President Obama at 202-456-1111. Switchboard: 202-456-1414 ONLY YOU CAN STOP THIS TRAVESTY OF OUR IMMIGRATION LAWS. Remember! If Democrats manage to pass a AMNESTY, you the taxpayer will be paying even more of your hard-earned dollars for millions waiting across the border, not the pariah employers.

We don't need pro-illegal alien mayors like Galvin Newsom of San Francisco and his counterpart Mayor Antonio Villaraigosa in Los Angeles. They have both aided and abetted foreign nationals, with many terrorizing the Americans and legal residents. That's why I'm voting for a new Mayor--Walter MOORE!
Add a Comment
Support Independent Media
We are 100% volunteer and depend on your participation to sustain our efforts!