by Mike Rhodes (editor [at] fresnoalliance.com)
Fresno City Council Members Blong Xiong (district 1) and Cynthia Sterling (district 3) held a press conference this morning (2-18-09). Xiong and Sterling discussed two recent incidents involving the police department. The first incident involved three Fresno Police Department officers in the narcotics division who were arrested for their participation in a car theft operation. The second incident, which has been widely reported, was the beating of a homeless man by a FPD officer. Sterling said she is in favor of establishing an Independent Police Auditor, but is waiting for a report from mayor Ashley Swearengin, before discussing the specifics of what that IPA might look like. The entire 16:36 minute press conference is below in an .mp3 audio format. 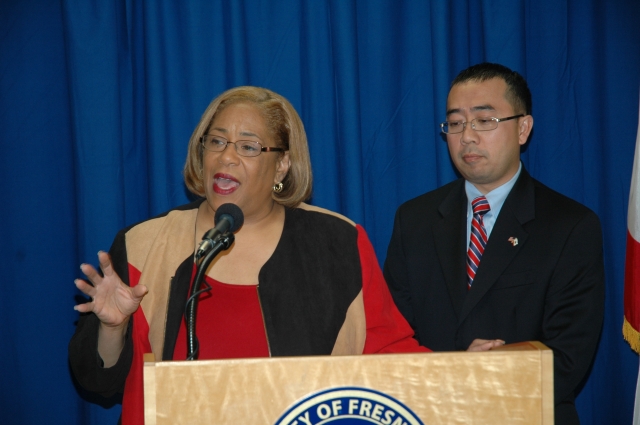 original image (3008x2000)
END_OF_DOCUMENT_TOKEN_TO_BE_REPLACED
§16:36 minute .mp3 Audio of the Press Conference
by Mike Rhodes
Listen now:
Copy the code below to embed this audio into a web page:
Download Audio (15.2MB) | Embed Audio
END_OF_DOCUMENT_TOKEN_TO_BE_REPLACED
Add Your Comments
Latest Comments
Listed below are the latest comments about this post.
These comments are submitted anonymously by website visitors.
TITLE
AUTHOR
DATE
Community forum date changed
correction
Online Audio Video Conferencing Services
illuminator
Announcement by the mayor
Ashley
Support Independent Media
We are 100% volunteer and depend on your participation to sustain our efforts!