Listen now:
Copy the code below to embed this audio into a web page:
Download Audio (6.8MB) | Embed Audio
Rekia from the new Oakland Cop Watch spoke first, after introductions from JR. (audio 19:41) 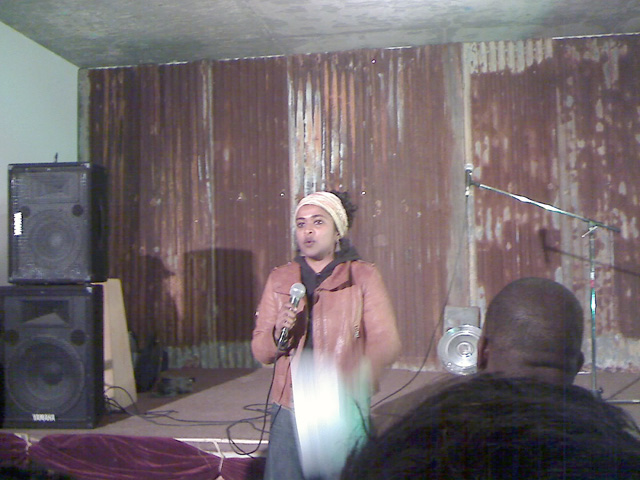 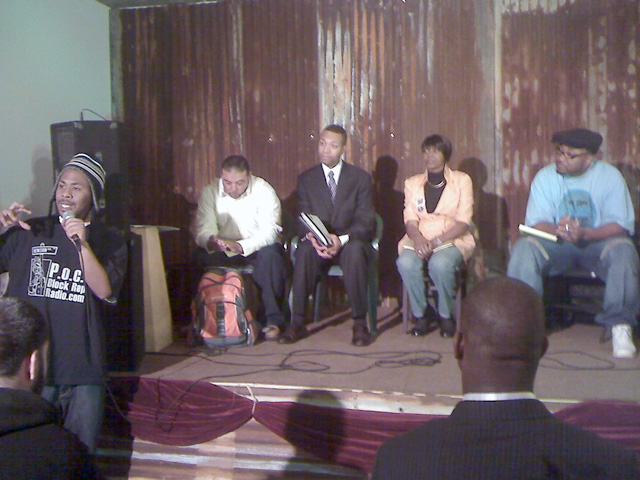 Thursday's 9am BART meeting and start of disruption campaign for BART accountability: http://nojusticenobart.blogspot.com/

by POCC Minister of Information JR

Jan. 23 marked another seminal point in the movement for justice for Oscar Grant III and victims of police terrorism, when the Prisoners of Conscience Committee organized a “Town Bizness Town Hall Meeting” at the legendary Black Dot in West Oakland. It was the first time that the community had a chance to vent and speak freely about what happened to Oscar Grant and their feelings on the Oakland Rebellions, as well as their feelings about the movement to get justice for police terrorism victims in general.

The POCC had a few chosen speakers to address the people, like Don Wiggins, the cousin of Oscar Grant; Jack Bryson, the father of Oscar Grant’s friends who were handcuffed on the BART platform when he was shot; Antoine “Soda Pop” Goff, a victim of police terrorism who served 13 years with his codefendant John Tennison on a crime they did not commit; POCC Chairman Fred Hampton Jr., an international organizer and former political prisoner who came all the way from Chicago along with one of his comrades to be a part of this town-hall discussion; and Willie Ratcliff, publisher of the SF Bay View newspaper. They spoke for about seven minutes a piece; then the floor was handed over to the community to voice their concerns.

The very diverse group of people in the room came from all different age ranges, nationalities and cultures. There were parents with their children, students, activists, former members of the Black Panther Party, business owners, protesters who were arrested in the rebellions, and journalists, just to profile a few of the people that were in attendance.

The event started off with a working set of demands that were put forward to the community to ratify. Here are those demands:

1. We demand that all police involved in the execution of Oscar Grant be arrested, convicted and jailed.

2. We demand that the state drop all charges against everybody arrested in the Oakland Rebellions.

3. We demand that the City of Oakland, County of Alameda and BART pay for all damage done to property during the Oakland rebellions, because what caused the rebellions was city, county and BART officials - i.e. the mayor, the D.A., the BART police chief - neglecting to respond to the murder of Oscar Grant, so they should assume full financial responsibility.

4. We demand the firing or resignation of Alameda County D.A. Tom Orloff, who had never before indicted a police officer for any crime in his over 20 years experience as the District Attorney.

5. We demand that BART police be disarmed.

6. We demand that the family of Oscar Grant be financially compensated for a loss that cannot be truly paid for.

This was an important move because many of the groups that are on the ground organizing around this issue say that “their demands” are the people’s demands and “their goals” are the people’s goals, yet they have never had an open forum to discuss with the people what the people think in general or about the demands specifically. The POCC refuses to be guilty of trying to pimp the situation and use the emotional outcry of our community as leverage or a stepping stone to be recognized by the establishment or grant foundations as “responsible leaders.” The POCC’s actions and track record speak to our sincerity in the human rights struggle.

The POCC is committed to planning one of these “Town Bizness” forums once a month at the Black Dot in West Oakland, so that the people will have a forum to discuss what is going on, as well as to get updated on organizing efforts. The next Town Bizness Townhall Meeting will be announced on the BlockReportRadio.com [2] website. The first Town Bizness Townhall Meeting will be aired on KPFA’s Full Circle, broadcast Fridays at 7 p.m., in the coming weeks and on http://www.blockreportradio.com [3].
The smothering of the Oscar Grant Movement

Since my last article, “The smothering of the Oscar Grant Movement,” it has gotten back to me that some have tried to write off my objective criticisms of the Coalition Against Police Executions’ (CAPE’s) organizing as “hating.” But I want to make it clear that in a real political movement - like the one we are engaged in now and like what happened in South Africa with the PAC (Pan African Congress) and ANC (African National Congress) leading the fight against apartheid, or what is now happening in Haiti with Lavalas fighting for democratic rule without imperialist intervention - throughout history constructive criticism was and is a necessary tool to guide principled struggle.

The only time someone would see this kind of criticism as “hating” is when they are not sincere with something to hide, because constructive criticism is to teach and build sincere forces in our movement, not tear them down. If any party that I have criticized feels I did it unfairly, let’s have a public objective debate about it - on paper or in the community.
Our cameras and cell phones

Right before sitting down to write this article, I called the Oakland Police Department to inquire about my camera, which was stolen from me by the OPD without warrant on Jan. 7 in the streets of downtown Oakland while I was on assignment documenting the rebellions. I was bailed out of Santa Rita County Jail the night after the rebellions, but my camera was not in my property bag, in which the jail gives you back all of your personal belongings that were on your person when you were arrested.

The OPD said they were holding my camera for “evidence.” But the reality is they do not, and did not, have a search warrant to look at the photos or footage on confiscated cameras and cell phones. The officer who picked up the phone at the Oakland Police Department - (510) 238-3915 - told me that I would have to sign a waiver to allow the police to download what is on my camera if I want it back now, or I would have to wait until they obtain search warrants to search the cameras and cell phones that they illegally took.

I am not waiving nothing, so I guess the thieving police are going to hold my professional camera in indefinite detention. They can care less that my camera is one of the most important journalistic tools I use to make an income to feed my family.
The resignation of the police chief and the new tape

Within recent days, Oakland Police Chief Wayne Tucker has resigned and a new tape showing a BART police officer punching a restrained Oscar Grant right before BART police officer Mehserle executed him adds fuel to an already explosive situation. Also, take into account that the Oakland police are neck deep in at least two other scandals: One is the murder of Oakland Post Editor Chauncey Bailey, which many in the community believe that they are secretly more involved in than they want to admit. The other scandal is where a number of officers and sergeants were caught falsifying reports, among other things, similar to what happened in the Oakland Riders case.

Now it is visible for the average citizen to see the Grant case is not a case of “a few rogue cops.” It is a case of Black life being devalued systematically in Amerikkka and the occupying army being able to do whatever they want in Black communities nationwide. So no matter if it’s the old police chief or a new police chief, if the system still exists, it will continue to be the same game with different names.
Mehserle and Oakland 100 court dates and the lack of support

There are a number of court cases that are connected to the police execution of Oscar Grant III, including the bail hearing of Johannes Mehserle, the BART police trigger man who executed Oscar, which is Friday, Jan. 30, 2 p.m., at 1225 Fallon St., Oakland. Also, a number of protesters who were arrested in the Oakland Rebellions on Jan. 7 and 14 are going to court on Feb. 6 and 9, at 661 Washington St. in downtown Oakland at 9 a.m. On Feb. 6, the hearing concerning those who were charged with felonies is in Courtroom 112; and on Feb. 9, those charged with misdemeanors are in Courtroom 107.

We need the community’s support in packing the courtroom to make sure that Oscar Grant’s executioner Johannes Mehserle does not get bail. Reportedly at the last hearing there were close to 20 officers who supported Mehserle at the hearing, and only like three protesters. We cannot let the court and city officials think that it is OK to free one of Oscar’s killers without there being major problems.

Let us never forget, it was the Oakland Rebellions in downtown Oakland that put this case in the international news.

And on a similar note, we have to back up the courageous Oakland 100 protesters who took to the streets when they saw local officials not responding to the murder of Oscar Grant and the coverup unfolding. It is the community’s responsibility to unify with the people who caught cases, even if we don’t subscribe to their kind of protesting, and pressure the D.A. to drop all of the charges against them.

Let us never forget, it was the Oakland Rebellions in downtown Oakland that put this case in the international news, not one of the “peaceful” rallies. There were peaceful protests for police terrorisms victims Gary King, Gus Rugley, Idriss Stelley and Laronte Studesville, but without the rebellions their cases stayed in the local media for a quick second. The Oakland Rebellions have the national mainstream media talking about Oscar Grant daily, and he was murdered almost a month ago, which is virtually unheard of.

You could hear more interviews and read more articles from MOI JR at http://www.blockreportradio.com [3]. Listen to the Sideshow, hosted by Minister of Information JR and his radio crew, in the usual Friday Night Vibe slot on KPFA 94.1 FM at midnight Jan. 30 and every Friday in February.
http://www.sfbayview.com/2009/weathering-t...
Add Your Comments
Support Independent Media
We are 100% volunteer and depend on your participation to sustain our efforts!