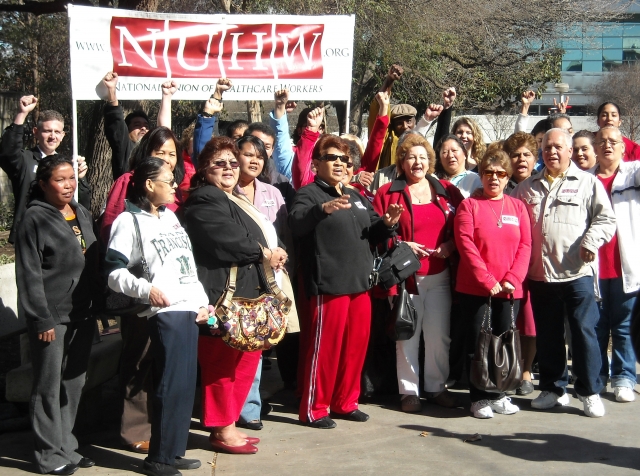 original image (2980x2217)
FRESNO—Dozens of homecare workers, Kaiser workers and other caregivers protested at the governor's offices in Fresno and Sacramento today to protect services for seniors and people with disabilities. They're part of the National Union of Healthcare Workers (NUHW), an independent union formed less than two weeks ago by the elected leaders of United Healthcare Workers-West (UHW) after they were undemocratically ousted by SEIU.

"In a crisis like this, our top priority should be making sure the most vulnerable people don't fall through the cracks," said Mary Padilla, a homecare worker in Fresno County for eight years who is organizing other caregivers to join NUHW. "The governor's cuts to IHSS won't save money and they won't protect the safety and dignity of the people we care for."

As Congress and the Obama Administration prepare an economic stimulus package with funds specifically to protect healthcare services for the most vulnerable, Gov. Schwarzenegger is still pushing for dangerous cuts in vital services like In-Home Supportive Services (IHSS). More than 400,000 seniors and people with disabilities depend on the healthcare service, which actually saves the state money by allowing those with long-term care needs to live at home rather than in nursing homes or more expensive settings.

The cuts proposed by the governor would halt food shopping, meal preparation, housekeeping, and laundry services for 80,000 IHSS participants, taking away the help they need to live independently. The governor would also require 7,000 low-income seniors and people with disabilities to pay more than $5,000 out of pocket each year on average to keep their services. His proposal would also slash the state's share of IHSS funding back to the minimum wage of $8 per hour, pushing more than 300,000 caregivers and their families closer to poverty and driving many out of the workforce.

NUHW was founded on Jan. 28, after the Service Employees International Union (SEIU) seized control of California's healthcare union in order to divide 65,000 homecare and nursing home from hospital workers against their will. Homecare workers, nursing home workers, and hospital workers in Fresno county—who have led the fight to defeat Gov. Schwarzenegger's proposed cuts to homecare services in previous years—are organizing to stay united in NUHW and maintain the strongest possible voice for their consumers and in their union.

"People have the same need for quality healthcare whether they're in a hospital, a nursing home, or a homecare setting," said Teresa Baker, an Admitting Representative at Kaiser Fresno. "When healthcare workers stick together, we've proven that we can stop these cuts and protect our patients." Baker has worked at Kaiser for 8 years.

http://www.nuhw.org
Add Your Comments
LATEST COMMENTS ABOUT THIS ARTICLE
Listed below are the latest comments about this post.
These comments are submitted anonymously by website visitors.