by Takver - Sydney Indymedia
Anti-whaling activists from the Sea Shepherd Conservation Society ship Steve Irwin have alledged that Japaneses whalers are using military grade anti-personnel weapons in violation of the Antarctic Treaty. According to a Sea Shepherd media release "The factory ship the Nisshin Maru and the two harpoon vessels in the fleet are equipped with Long Range Acoustical Devices (LRAD). This is a military grade weapon system that sends out mid to high frequency sound waves designed to disorient and possibly incapacitate personnel. It is basically an anti-personnel weapons system." 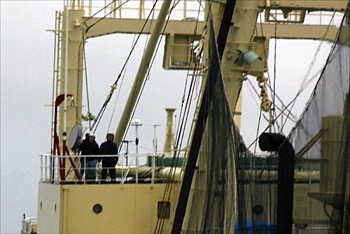 Photo: Japanese whalers aim long range acoustic device, a military class weapon at the crew of the Sea Shepherd ship Steve Irwin. This LRAD emits mid to high frequency sound waves that can disorient, confuse, cause nausea and vomiting and temporary sometimes permanent deafness. It is illegal for a military type weapon to be deployed by civilians against civilians in the waters of the Southern Ocean. Photo by Stephen Roest/Sea Shepherd Conservation Society

The whalers have used the acoustic weapon against activists as well as deploying water cannons, concussion grenades, and throwing solid brass and lead balls at Sea Shepherd crewmembers. Captain Paul Watson from the Steve Irwin said "If we were to do any of the things these thugs are doing, we would be denounced as eco-terrorists. There certainly is a double standard where whale killers can use violence without fear of condemnation from their government and we can't even defend ourselves without condemnation from our governments. What is important however is that despite the violence from the whalers, no whales are being killed. They can't get away from us and if we keep on their tail they can't kill whales."

Sea Shepherd relocated the fleet on January 31st at the position of 67 Degrees 18 Minutes South and 163 Degrees 52 Minutes West, after having to break off its pursuit earlier in the month to refuel in Hobart. Whaling appeared to be ocurring at the time of first sighting. Sea Shepherd launched two inflatables and their helicopter to harass the fleet and move them along. While the Nisshin Maru is fleeing, no whaling can be done.

Paul Watson said "They are pointing this low, long-range acoustic weapon at us, which can cause deafness - permanent or temporary - vomiting, nausea and disorientation. They even aimed it up at the helicopter. It could have caused the helicopter to crash if they had fired it."

"They have fired it from a distance and some of the crew have felt it, but it was too far to be effective. It is being used against civilians in the Antarctic treaty zone, and that is highly illegal," he said.

The two Japanese harpoon vessels have attempted to distract Sea Shepherd from its pursuit of the Nisshin Maru, maneuvering very close to the Steve Irwin. The high seas confrontation began in clear weather with dense ice and heavy swells but conditions quickly became treacherous with the onset of fog and blizzard conditions. One Sea Shepherd activist was slighlty injured when knocked over by the spray of a water cannon. Another activist was hit in the face by a large chunk of metal thrown from a harpoon boat with a safety helmet prevented serious injury. Crew of the Steve Irwin crew retreated when acoustic weapons were used.

A spokeperson for Japan's Institute of Cetacean Research, Glenn Inwood, was reported by Associated Press as being unable to immediately confirm or deny the Sea Shepherd's claims. "We can neither confirm nor deny the strategies employed by the Japanese research vessels to protect themselves from the criminal actions committed by the Dutch vessel," Mr Inwood said. "We can say, however, that all legal means available will be used to ensure these pirates do not board Japanese ships or threaten the lives of the crews or the safety of the vessels."

§Whaling confrontation in icy waters
by Takver - Sydney Indymedia
Photo: Sea Shepherd crew in a Zodiac inflatable boat race alongside Japanese harpoon whaling vessel the Yushin Maru No. 1 (Photo by Adam Lau/Sea Shepherd Conservation Society)
Add Your Comments
Latest Comments
Listed below are the latest comments about this post.
These comments are submitted anonymously by website visitors.
TITLE
AUTHOR
DATE
Stop the Bloody whaling now
Susan Anthony
Support Independent Media
We are 100% volunteer and depend on your participation to sustain our efforts!