§Douglas Van Houweling on The Development of the Internet, Implications for our Future
by cybird
Sunday Feb 8th, 2009 11:36 AM 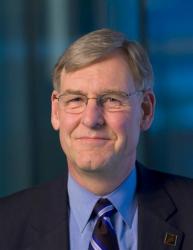 Watch the event recording at:
http://beryl.cse.ucsc.edu/video/Distinguished_Lectures/Houweling2_4.wmv

The global economy increasingly relies upon a remarkable network-based technological ecosystem that has over the last twenty years provided the foundation for unprecedented growth and opportunity. The higher education and research community has played a key role in the creation of this ecosystem and continues to pioneer its future. Internet2 is a community united by its commitment to sustaining and accelerating this progress through the development of advanced Internet technologies. Fundamental new developments are now appearing in the advanced network community in response to the needs of our community. What is the prospect for an even more comprehensive “civic cyberinfrastructure”? What can we learn from the past as we look to our future in this challenging time of uncertainty and change?

Founding president and CEO of Internet2, Douglas Van Houweling played a major role in the development of the Internet in the United States. In 1987, Dr. Van Houweling served as chairman of the board of MERIT, Inc., a statewide computing network in Michigan, when the National Science Foundation awarded it responsibility for operation and management of the NSFNET national backbone. MERIT worked in partnership with IBM, MCI and the Michigan Strategic Fund. Dr. Van Houweling also served on the board of EDUCOM, and he helped to establish many initiatives in cooperative information technology among universities. Currently a professor in the School of Information at the University of Michigan, he is a co-author, with James Duderstadt and Daniel Atkins, of Higher Education in the Digital Age. Dr. Van Houweling served as a member of the National Academies Panel on the Impact of IT on the future of the Research University and at Michigan, as the vice provost for information and technology as well as the dean for academic outreach. Dr. Van Houweling came to Michigan from Carnegie-Mellon University, where he was vice provost for computing and planning, and before that, Cornell University, where he was assistant professor of government.

Internet2:
http://en.wikipedia.org/wiki/Internet2
http://internet2.edu
Add a Comment
Support Independent Media
We are 100% volunteer and depend on your participation to sustain our efforts!