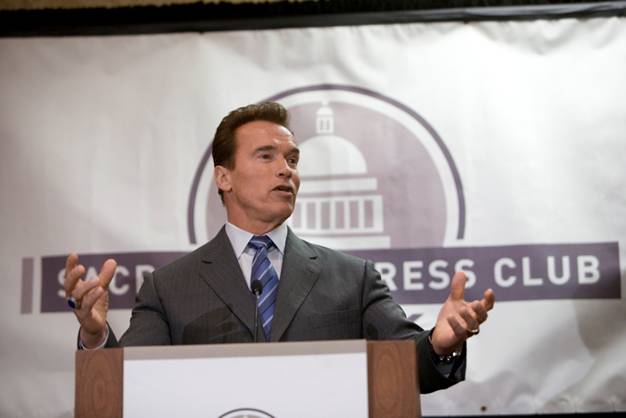 Governor Arnold Schwarzenegger on Thursday used the announcement by the California Department of Water Resources (DWR), showing a statewide Sierra snowpack water content at only 61 percent of normal, as yet one more opportunity to campaign for the peripheral canal and more dams.

“California is entering a third straight year of drought, and today’s snow survey is just one more piece of evidence that we urgently need comprehensive water reform to protect our economy, our jobs, our communities and our quality of life," said Schwarzenegger, who continually touts himself as the "Green Governor." "California is headed toward one of the worst water crises in its history, underscoring the need to upgrade our water infrastructure by increasing water storage, improving conveyance, protecting the Delta’s ecosystem and promoting greater water conservation.”

"Improving conveyance" means construction of a peripheral canal, a bad idea that was voted down by California voters in 1982. A coalition of environmentalists, commercial fishermen, recreational anglers, Delta farmers and California Indian Tribes is strongly opposing the canal because it would create the infrastructure to export even more water out of the imperiled California Delta.

The Governor claimed that California’s snowpack water content is "particularly significant" this year "because the state has endured two years of drought and our reservoirs are low." Because less-than-normal water supply conditions exist, the initial State Water Project allocation for 2009 was placed at only 15 percent of water contractors’ requested amounts. The results of this survey could impact future allocations.

"Precipitation to date is at only 70 percent of normal statewide, threatening another dry year, while unseasonably warm and dry conditions are rapidly eroding the snowpack," according to Schwarzenegger. "Furthermore, regardless of snowpack conditions, it is clear water deliveries through the Sacramento-San Joaquin Delta will remain in jeopardy because of recent and pending regulatory uncertainty."

Unfortunately, Schwarzenegger and the DWR staff failed to mention that the reason why the reservoirs are so low is because the state and federal governments exported massive volumes of water to the Westlands Water District, Kern Water Bank and southern California in 2007 and 2008. Although the past two years were relatively dry and this year is shaping up as another dry one, the past couple of below average water years would be no means constitute a natural drought.

Instead, the Governor, DWR and the U.S. Bureau of Reclamation manufactured an artificial "drought" by draining the state's major storage reservoirs. However, if we don't get more significant precipitation this winter and spring, we really will be in a major water crisis because of mismanagement by the state and federal governments.

In preparation for another dry year, Schwarzenegger said DWR is facilitating what water transfers may be available through the state’s Drought Water Bank Program and working with local water agencies to update their Urban Water Management Plans. "Many providers have already enacted mandatory or voluntary water rationing, and it is likely more agencies will require some form of rationing if dry conditions persist," according to the Governor.

Last July, the Governor and Senator Dianne Feinstein proposed a "compromise" plan to the Legislature to build a peripheral canal and more dams. Schwarzenegger claims the water bond "would put the state on the path toward restoring the Sacramento-San Joaquin Delta, expanding water supplies and promoting conservation efforts that will ensure a clean, reliable water supply for California."

However, canal opponents say the Schwarzenegger/Feinstein plan would destroy rather than restore collapsing populations of chinook salmon, steelhead, delta smelt, longfin smelt, striped bass, threadfin shad, American shad and Sacramento splittail by diverting badly needed freshwater flows from the Sacramento River to subsidized agribusiness on the San Joaquin Valley's west side. The canal/dams plan would also be enormously expensive, costing an estimated $12 to $24 billion at a time when the state of California is in severe financial crisis.

The word "drought" is subject to a number of definitions and interpretations. "While the public, media and control agencies like simple definitions to classify water conditions, in a state as large and varied as California, it is not wise to place too much reliance on a single broad definition," according to Maurice Roos, DWR hydrologist, in the abstract for "Drought in California: When Does It Begin and When Does it End?," a paper published in 1996. "Because of the natural frequency of dry years, official drought should not be declared often."

For more information on DWR’s snow survey, go to http://cdec.water.ca.gov/cgi-progs/snowsurvey_sno/DLYSWEQ.