Photo: Pat traveled down the Klamath River in August, along with Assemblywoman Patty Berg (D-Eureka) and others. After touring the river, she met with agency and private scientists to discuss the importance and fragility of the Klamath River salmon. Photo credit: Fred Euphrat. 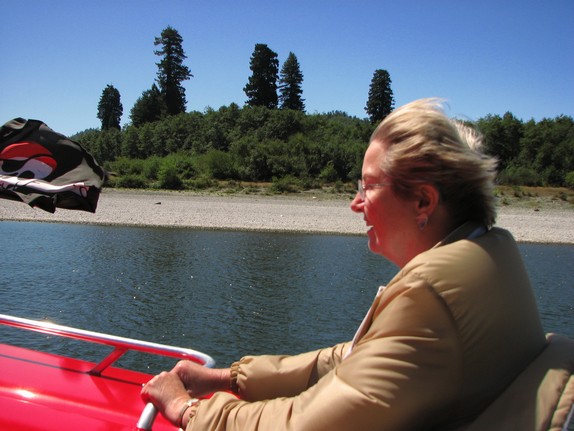 Wiggins Slams Lack of Action by DFG, Says She May Introduce New Legislation to Protect Salmon from Suction Dredge Mining

Wiggins, who chairs the legislature’s Joint Committee on Fisheries & Aquaculture, also said she is considering new legislation to limit the use of “suction dredge” gold mining, which involves the use of large dredges to vacuum rock and sand from rivers and creek beds, killing fish. Coho salmon, in particular, are at great risk from this practice.

Wiggins led a group of legislators in writing a letter to DFG officials in support of a petition from environmental organizations and the Karuk Indian Tribe, whose lands include portions of the Klamath River, asking DFG to restrict suction dredge mining along the Klamath. But the department has thus far refused, and officials there have yet to begin a court-ordered review of the situation.

“California’s once-thriving salmon populations have plummeted to the point that they face extinction unless we take immediate action,” Wiggins said. “It will take courage and bold action on all our parts to bring the fisheries back to healthy levels.

“Last year, commercial fishermen were told to stop fishing for ocean salmon, and it is expected they will be told to do so again this year,” she added. “Even though this puts tremendous pressure on them, their families and their local economies, they understand the need to regenerate the stock. However, a small group of recreational miners are allowed to continue suction dredge mining on the streams that serve as nurseries for spawning salmon. It is more than unfair to ask an entire industry to make sacrifices while these other activities continue.”

Wiggins said the lack of appropriate action is one factor contributing to high rates of unemployment in the fishing industry, and that “it’s time for our government to step up. If the Department of Fish and Game is unwilling to place the burden of rebuilding fisheries fairly upon all users, I will continue to take legislative action to get government to do its job.”

Accordingly, Wiggins says she is considering re-introducing a measure that would put a temporary halt on suction dredge mining until DFG completes its court-ordered mandate to fix long-term regulations.

Wiggins represents California’s 2nd Senate District, which includes Humboldt County (and is also comprised of portions or all of Lake, Mendocino, Napa, Solano and Sonoma Counties).

Tel: (916) 651-1897
Fax: (916) 324-3036
Add Your Comments
LATEST COMMENTS ABOUT THIS ARTICLE
Listed below are the latest comments about this post.
These comments are submitted anonymously by website visitors.