Add an Event
Newswire
Calendar
Features
Home
Donate
From the Open-Publishing Calendar
From the Open-Publishing Newswire
Indybay Feature
Publish to Newswire
Add an Event
Related Categories: San Francisco | Womyn
Walk 4 Life Counter-March
by Craig Hudson (orcadude1 [at] aol.com)
Saturday Jan 24th, 2009 8:58 PM
In protest against the right wing message of walk for life, hundreds of pro choice/gay rights and even a few religious rights advocates gathered for a counter-march down the Embarcadero/Fisherman's Wharf. The lines of the counter-march were never far from the lines of walk for life, as both marches walked side by side with eachother until the end of the walk for life march, which concluded nicely with the lines of pro-life'ers walking up the hill as the people of the counter march chanted nah-nah-nah-na..Hey Hey Hey...Gooodbyyye! 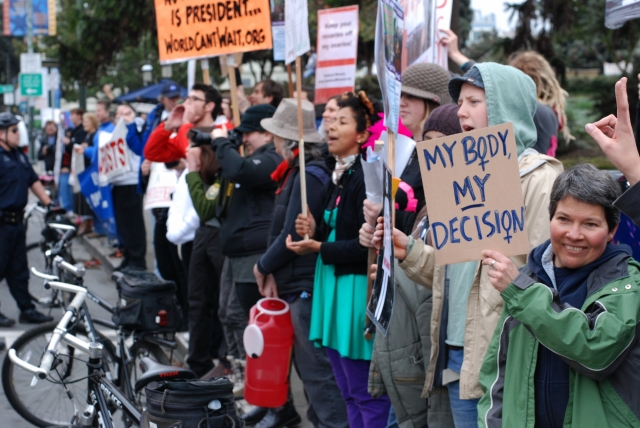 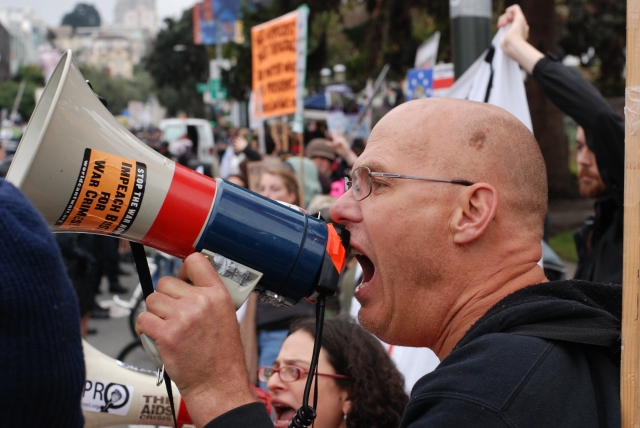 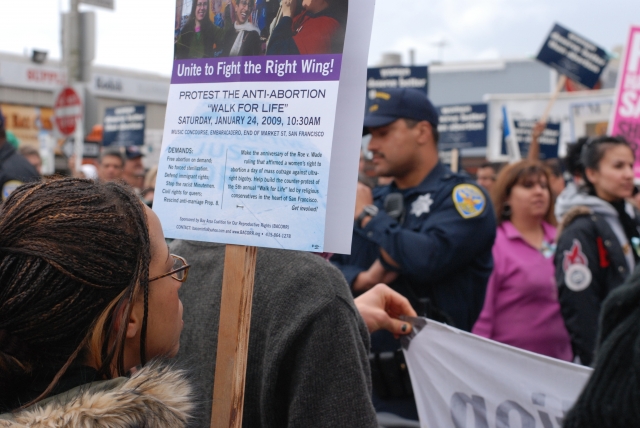 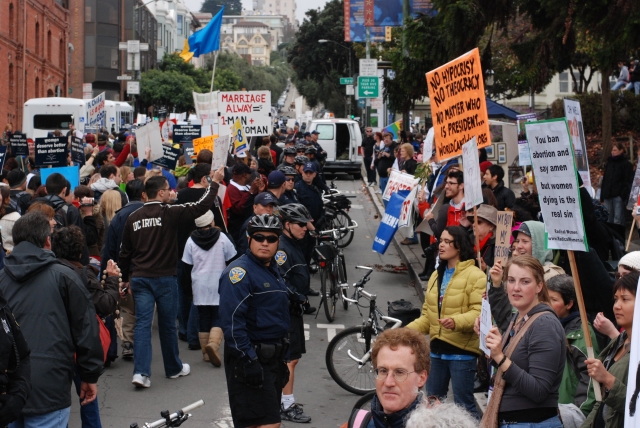 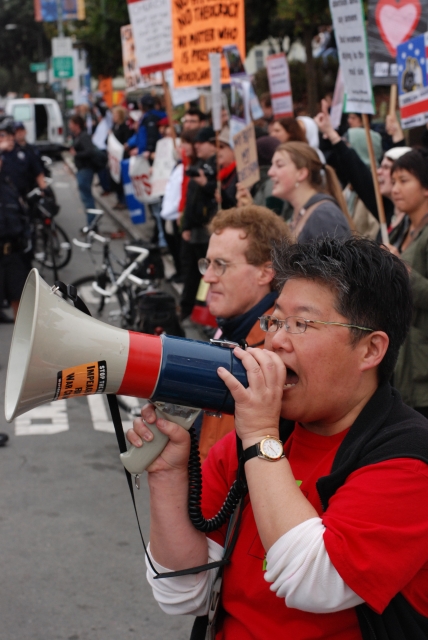 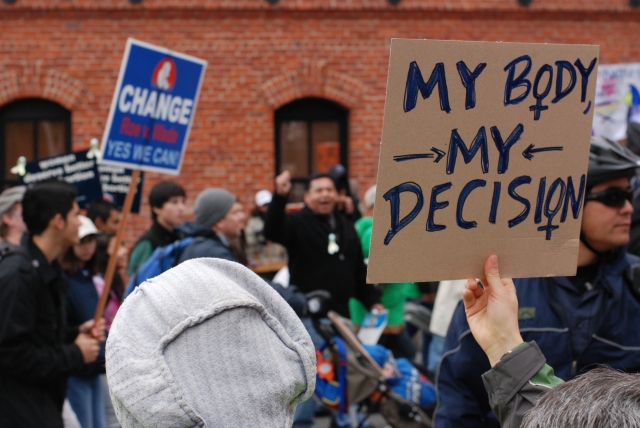 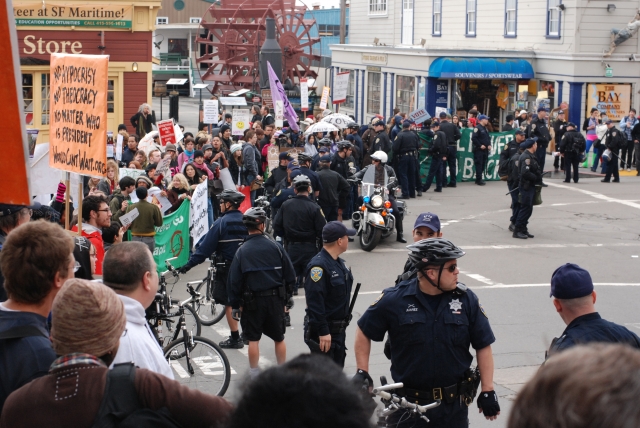 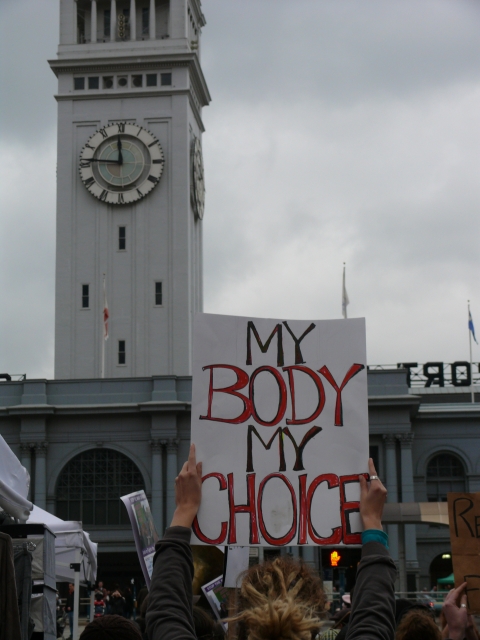 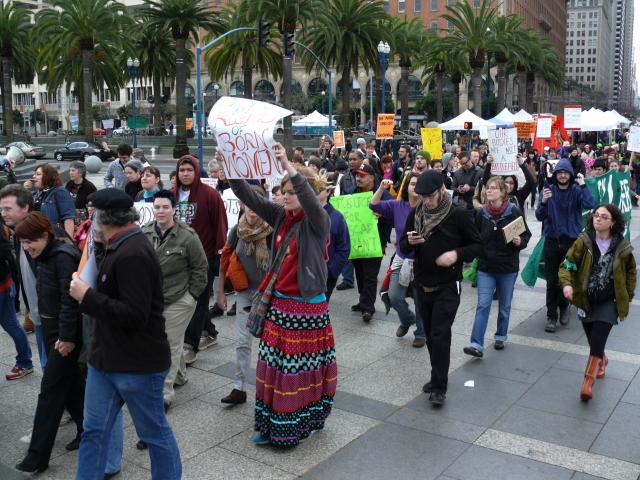 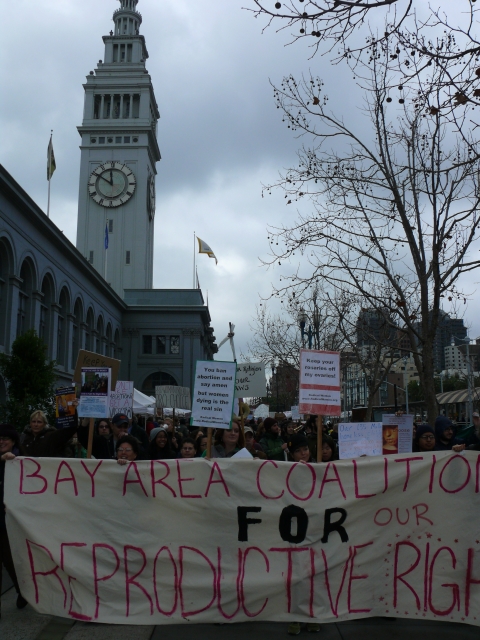 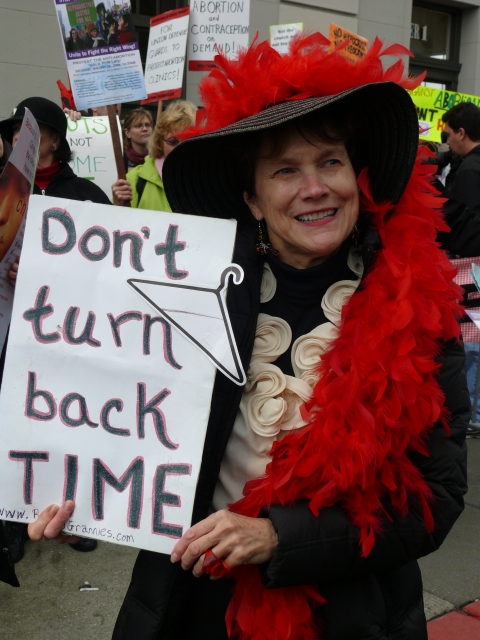 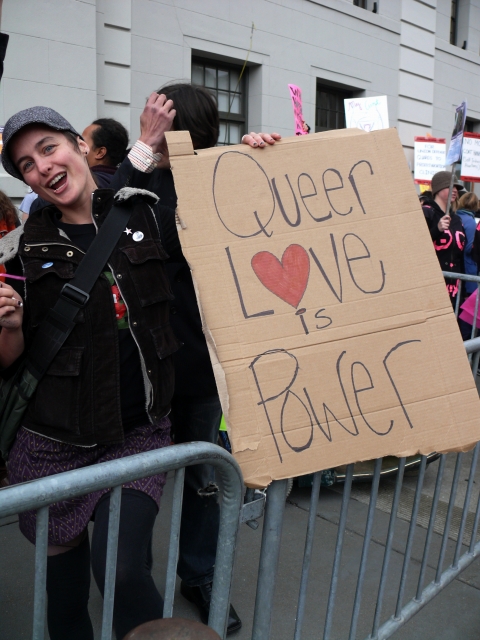 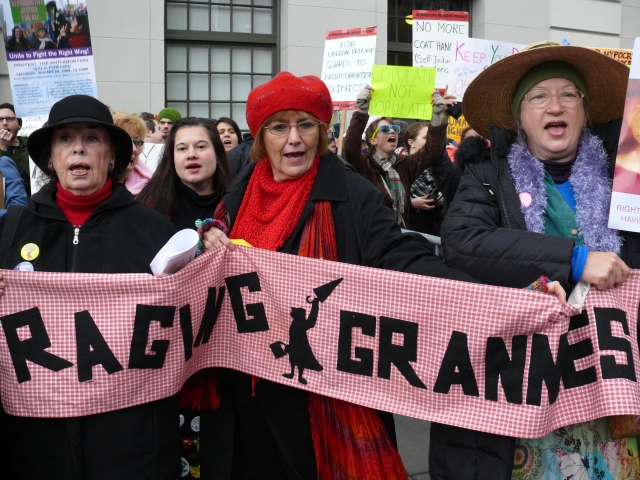 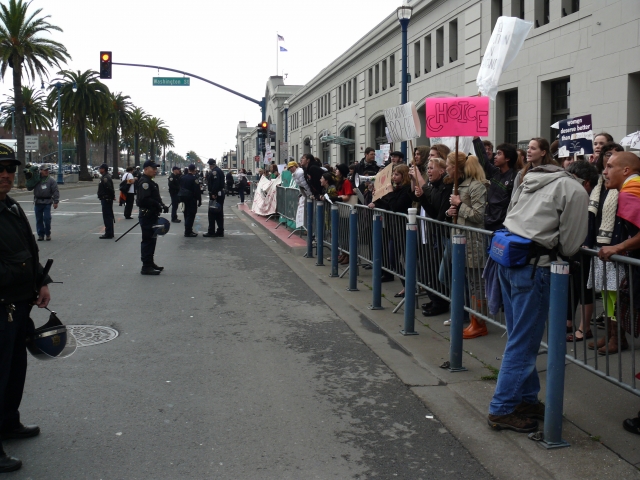 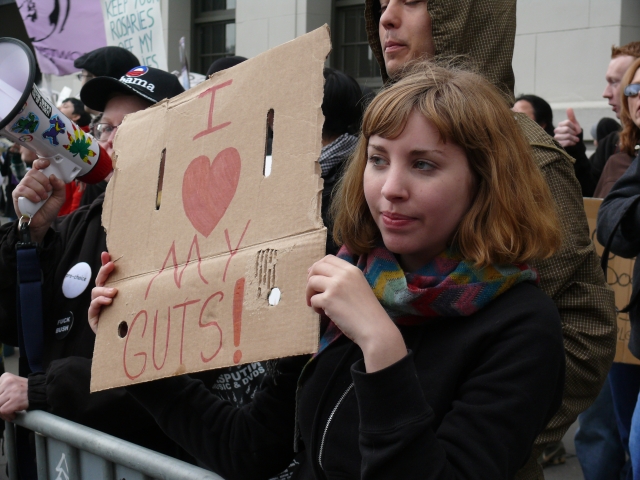 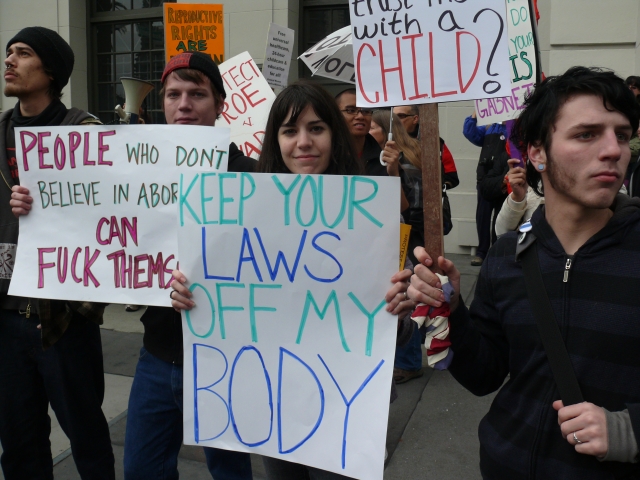 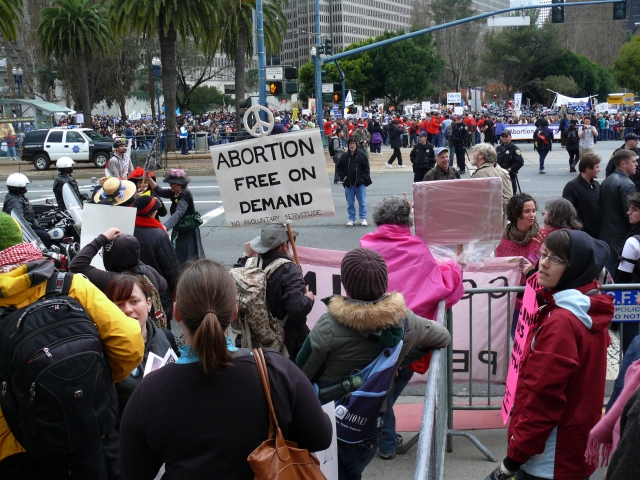 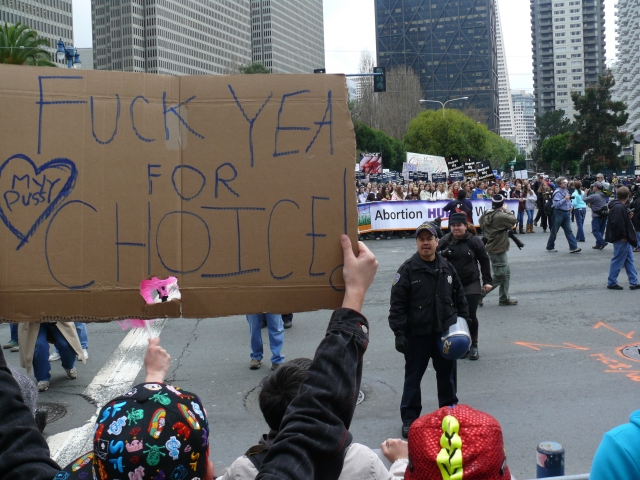 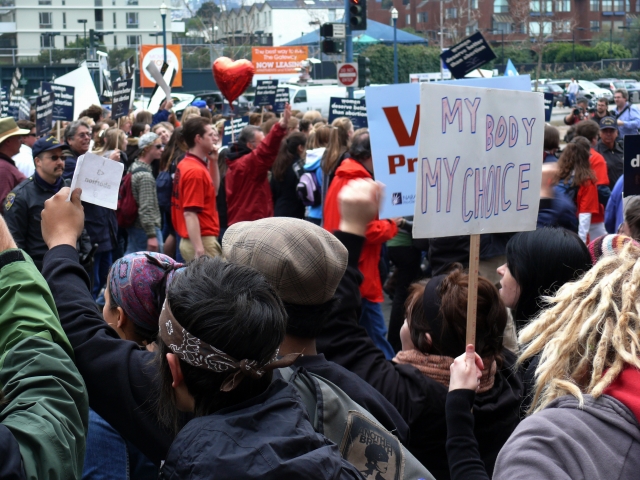 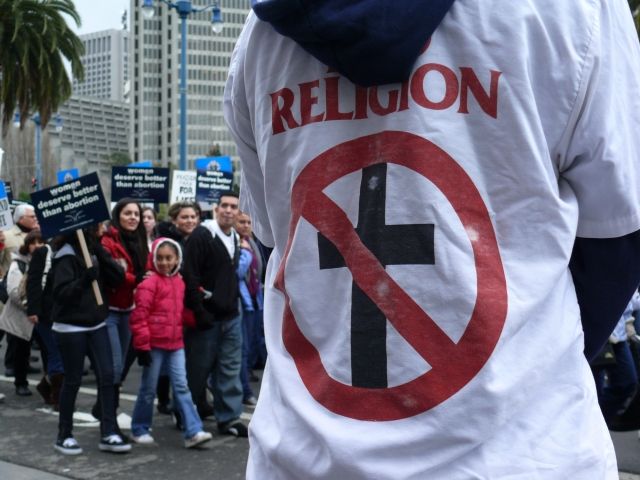 §100 pro-abortion marchers; Celebrate abortion elsewhere
by =
Monday Jan 26th, 2009 8:14 AM
There were 100 pro-abortion marchers and the march ended at Aquatic Park with 20 pro-abortion marchers. I saw it all and walked in the pro-abortion march. We were a tiny group. PLEASE TELL THE TRUTH ABOUT OUR FORCES. The anti-abortion San Francisco Catholic Church's hate parade oF 10,000 was filled with mostly workingclass Latino schoolchildren, our natural allies in the fight against capitalism. The children have no idea what the issues are, and they were 90% of the hate parade. The teenagers asked what the coat hangers we carried were for as they had no idea that women use such things to abort a fetus when there is no legal abortion. They also carried signs against birth control pills. These children have no experience with anything. They live in a fantasy world; when they start paying the bills, it changes. I also saw children ages 3-9 in the parade, brought by their stupid parents. I cannot imagine any parent bringing their child to San Francisco to march for 2 miles in an anti-abortion parade. This is mental illness and child abuse. The adults were all clearly mentally ill. Religion, better known as superstition, is of couse perpetrated by mentally ill parasites. The San Francisco Democratic Party should never have given this fascist march a permit; they did not give the Nazis a permit to march in San Francisco in the 1980s. The San Francisco Democratic Party created this provocation. No one has a right to falsely yell fire in a crowded theater. This anti-abortion, anti-gay marriage parade (there were plenty of Yes on 8 signs in the Catholic Church parade) was part of building a fascist movement in this country. People stayed away because the Democratic Party told them to do so and because they can see they cannot stop this outrage with so few numbers. This is a local parade; many people came on BART. I watched them come out of the BART station. Others came from nearby. I saw a sign from Marin Catholic High School, another from Martinez. It is time the pro-abortion people celebrate Roe v. Wade far away from this child parade. There is clearly no interest in this town in preventing the anti-abortion, anti-women hate parade brought to us by the San Francisco Catholic Church. The anti-abortion march did not end nicely; it ended with a gang of San Francisco cops, many in shorts in 45-50 degree weather, surrounding the pro-abortion group. The cops were fully armed and on foot, bicycle and in cars. There must have been at least 50 cops, of all colors and both genders. Most of the cops were white males; all of the men had hard hateful faces and were proud defenders of the anti-abortion parade. San Francisco taxpayers wasted hundreds of thousands of dollars on this 2 hour hate parade, brought to us by the San Francisco Catholic Church and the San Francisco Democratic Party, which clearly can hardly wait to have them march on Market Street. Maybe then we will have the numbers to get rid of it.
Add a Comment
§Different anti-abortion crowd than last year!
by As I recall....
Monday Jan 26th, 2009 11:54 PM
I know that last year and the years before there were significant numbers of members of Chinese Christian churches at the very large anti-abortion march in San Francisco. Also, groups of college students who are in Asian Christian clubs, carrying signs identifying their clubs came from both UC Berkeley and Stanford. I spent a lot of time interacting with the anti-abortion side, trying to get some dialogue going (hopeless) and saw NONE of those groups this year.

Wondering why the shift to an overwhelmingly Latino Catholic constituency in the anti-abortion march this year. Fact is, many Asian-Americans (recent immigrants from India, Korea, China) are using abortion for sex selection in this country, and sadly they find cooperative doctors, especially in LA. That should be illegal, as it is sexism at its worst! (If a second child would result in a second daughter, they abort and try for a boy). So one has to wonder, does this have anything to do with the definite LACK of Chinese Christian churches and Asian-American Christian college clubs at the march this year? Perhaps they are aware they would face some serious questioning? Or maybe they aren't so anti-abortion after all!

Add a Comment
§hmmmm
by cat
Saturday Jan 31st, 2009 9:28 AM
Maybe it is because it was Lunar (Chinese) New Year the following Monday, and more people chose to be with their families over the weekend.

I wasn't there this year, but I was there last year, and my impression was that the anti-choice constiuency was mostly White and Latino (from what I recall). I think the idea is interesting, but my sense is that the Chinese American Christian groups at UC Berkeley and Stanford haven't dropped abortion as an issue or anything. Just my sense of things. Sounds like it was a great day overall!
Add a Comment
§Asian Christians
by D.E.A.
Sunday Feb 1st, 2009 1:13 PM
I was at the Walk for Life (on the pro-life side) and I was walking right near Our Lady of Peace Church in Santa Clara, which is mostly Filipino. I saw many Filipino Catholics at the walk, though perhaps numbers of other Asian ethnic groups and Christian denominations were down.
Add a Comment
§What Walk for Life did you attend? There were 32,000 present of all ages and ethnicities
by Carol Marie
Sunday Nov 15th, 2009 6:25 PM

Wow, last year (2009) was the 5th Walk I've attended. The first walk was about the size you've suggested, with only 7000 in attendance, but the 2009 walk had a confirmed 32,000 walkers completing the event at Marina Green (they actually had someone standing there, counting people as they completed the walk).

I used to be vehemently Pro-Choice, you see, I've had 2 abortions, so I had a pretty serious reason to feel the need to insist that my choice had been a good choice. And any time anyone brought up the subject of abortion, I got angry, really angry that anyone would dare challenge my right to choose. The thing is, nearly 30 years later, I still felt that anger, it still really got to me, and I absolutely refused to discuss the subject.

You know, I only found a way to let go of that anger when I finally took the time to open myself up to looking at the subject, on my own terms, but honestly, allowing the possibility that I might be wrong. And when I allowed myself that freedom, the freedom to accept that I might be wrong, the freedom to read about, talk about, consider the subject, rather than simply digging in my heals, that's when the wall came crumbling down, and the pain I'd been masking was finally set free. I admitted I was wrong, and I was able to move past it.

I now walk on the side of the Pro-Lifer's and I will until the day that I die. I'm no longer afraid to talk about the subject, and I am happy to do so without condemning those who disagree with me. You see, I thought that the pro-life side was angry, but I now see that I was the one who was angry, I was the one who thought they'd condemn me. They haven't. For a while, after realizing that abortion is wrong, I kept my abortions a secret, as I worked along-side my pro-life, new found friends. Then, finally, I could be Silent No More and I shared with people, one at a time, each time expecting to pay the price of a friendship for speaking out.

These people you suggest are against women have been the ones there for the women who are pregnant and frightened. They are the ones who are willing to open their homes, to feed them, to provide them with cribs, strollers, car seats, diapers, job training, rent payments, whatever it takes to help a woman get her feet back on the ground after the trauma of a surprise pregnancy. The Planned Parenthood folks, they have one "choice" to offer, pay and we'll kill your kid," although they'll tell you it's "product of conception" and merely "a clump of cells." But by 21 days, there is a fetal heartbeat, by the time they perform abortions, there are arms and legs, fingers and toes. You see, they have to wait until they can count the extremities to ensure they've gotten the whole thing out, and don't leave behind parts that will make the woman sick.

You see, it's now been over 30 years since I had my first (of two) abortions, and I still miss the son I never held. I wonder what he would have been like. I miss my second child as well. These guys would have changed the course of my life, absolutely, but who's to say it would have been for the worse?