by HUFF (info [at] huffsantacruz.org)
Even less "public" space for peaceable assembly, performance, and social interaction. The move along law extended to benches. 14' "sitting" exclusion zones around benches. Expansion of exclusion zones to "public art", "directories", and "trash compactors" - which means many more of these items are on the way. More "stay away" orders. Increased police presence downtown via "non-general fund" revenues. "Public restrooms" in (three) private businesses (provided with subsidies). “Real Change, Not Spare Change” (again). Three unanswered citations = warrant. More "tools" for law enforcement. A City Council that is convinced that regulation is the solution, rather than communication and co-operation and community building.
Please read the attachment for details (in Microsoft Word format). Note: we do not have a copy of the actual suggested ordinance revisions yet, just the staff report's summary of them. They are likely to be posted to the City Council web site shortly (must be posted within a minimum of 72 hours of the meeting itself).

Make sure everyone you know voices their opinion to the City Council (contact info immediately below). Tell your fellow activists, friends, family, co-workers, and anyone else you deal with on a regular basis to contact the City Council about this, and why it is important. You're not likely to get a substantive response, but the more they hear from the public, the more cautious they'll be about rubber-stamping what Lynn Robinson (possibly the most "conservative" member of the City Council), Ryan Coonerty (who will not be able to run again four years from now), and Mayor Cynthia Mathews (who jointly campaigned with Mike Rotkin the last two times around, and will not be able to run again two years from now) are recommending - they're already well aware that they're going to face substantial resistance.

Turnout at the actual meeting is important... while the City Council is likely to go ahead, regardless of public input, the degree to which they kowtow to the reactionary interests pushing this proposal: 7 p.m. on Tuesday, January 27th in the City Council Chambers (809 Center Street in downtown Santa Cruz). It also doesn't hurt to send email and leave voice messages in advance. It is very likely that City Staff will be tallying public communications, in favor, and not,

If you run into a current or former City Council member (since they have the ears of those in power), make sure you let them know what you think. Good and bad.

On Tuesday evening, the Santa Cruz City Council will consider
recommendations by Mayor Cynthia Mathews and Councilmembers Lynn
Robinson and Ryan Coonerty to make Santa Cruz’ downtown and beach area
more safe, vibrant and welcoming for community members and visitors
alike. This effort will improve and expand existing ordinances in
order to make them consistent, understandable and enforceable; other
programs will address specific issues. The proposal includes: 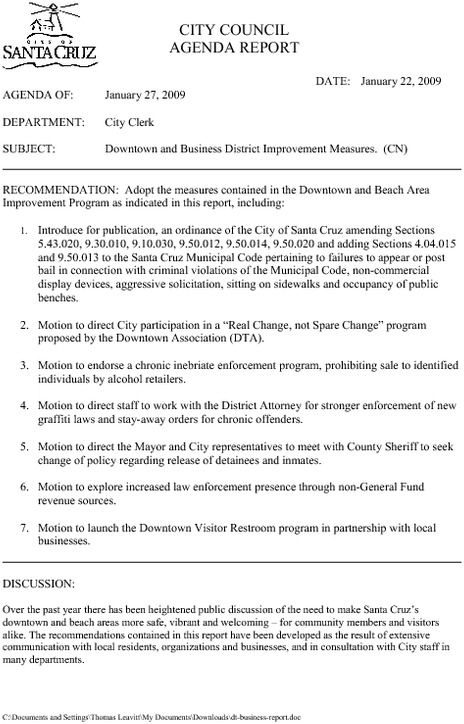 Download PDF (110.0KB)
O.K. PDFs are allowed. Doc files are not.
END_OF_DOCUMENT_TOKEN_TO_BE_REPLACED
Add Your Comments
Latest Comments
Listed below are the latest comments about this post.
These comments are submitted anonymously by website visitors.
TITLE
AUTHOR
DATE
Get a life Robert!
Jennifer
Current
Robert Norse
Updated?
Shadow
More Updated Useful Info at...
Robert Norse
Overwhelming response
Sara
The shadow knows
I was there too
Is that what happened?
Shadow
Something To Note
Shadow
We'll See
Shadow
More public space
is not needed
Support Independent Media
We are 100% volunteer and depend on your participation to sustain our efforts!