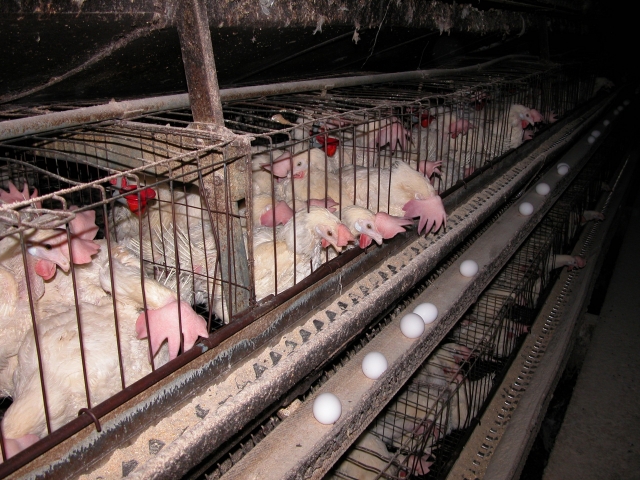 original image (2560x1920)
One of the most exciting results of Proposition 2 — California’s successful campaign to ban battery cages for hens, gestation crates pigs and veal crates for calves — is that it energized activists across the United States, introducing a new generation of animal advocates to the horrors of factory farming. Many of these people had known little, if anything, about agribusiness practices. But they literally took up the Prop 2 banner, getting involved in the fight to end the use of intensive-confinement devices in California.

Now, taking advantage of the momentum generated by the California voter initiative, a group of activists has formed the Farm Animal Protection Project (FAPP). Located in Sonoma County, FAPP is an all-volunteer group that will use the knowledge, skills and tactics learned during the year-long Prop 2 battle and apply them to a permanent campaign for animals. The group will use leafleting, tabling, food outreach, film screenings, special events and other tactics to educate companies, schools and the public on how easy it is to reduce cruelty to animals, including not buying eggs from caged hens — or, better yet, not buying eggs at all.

“Throughout the Prop 2 campaign, we heard from farmers who were concerned that people would buy cheaper eggs from out of state once the measure passed,” says FAPP Director of Campaigns Hope Bohanec, who served as the Sonoma County coordinator for the Yes on Prop 2 campaign. “So FAPP will be reaching out to restaurants, grocers and school campuses in Sonoma County, urging them to support California egg producers once Prop 2 takes effect in 2015.”

Hope suggests that every county in the state form a grassroots organization similar to Sonoma’s FAPP. “Imagine the power this would create,” she says. “We’ll be able to say, ‘See how well Prop 2 works!’”

Paul Shapiro, senior director of the Humane Society of the United States' Factory Farming Campaign, applauds the new group. “Prop 2 was the most important victory for animals to date, but it’s only one chapter in the movement’s history, and it’s time to start writing the next chapters,” he says. “As much momentum as we have from Prop 2’s overwhelming passage, progress is not going to be self-executing. Progress requires that we remain vigilant and active. We want to make sure that the advocacy community that was cultivated throughout the Prop 2 campaign continues to wage more and more victories for farmed animals. By working with local retailers to get them to stop using eggs from caged hens, we can make sure that progress does indeed continue.”

Although FAPP will be focusing on factory farming, the group’s campaigns will benefit other animals as well. “Helping people go vegan brings attention to fur, circuses, vivisection and other animal-related issues,” explains Hope. FAPP will offer monthly potlucks, bake sales, cooking classes and more, all outlined in an e-newsletter. The group will meet one Sunday each month in Rohnert Park.

With FAPP blossoming, two smaller animal rights groups in the county are folding. Members of Sonoma People for Animal Rights, co-founded by Marianna Mayer and Paul Toussiant 25 years ago, and Vegan Voices, which Hope founded in 1994, recognized the sense in channeling their energy and limited financial resources into one larger grassroots organization, thus compounding their outreach ability. (Other animal- and vegan-advocacy groups in Sonoma County include the Animal Legal Defense Fund, headquartered in Cotati, and Organic Athlete, located in Sebastopol.)

Hope says the Farm Animal Protection Project will be reaching out to other social-justice causes, such as the environmental movement, to work together. You’ll be able to learn more about FAPP at http://www.FarmAnimalProtection.org (the site is still under construction).

http://strikingattheroots.wordpress.com/
Add Your Comments
LATEST COMMENTS ABOUT THIS ARTICLE
Listed below are the latest comments about this post.
These comments are submitted anonymously by website visitors.