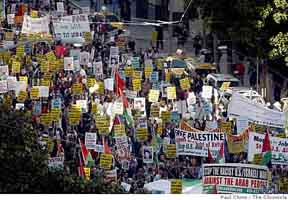 Import event into your personal calendar
Date:
Thursday, January 15, 2009
Time:
5:00 PM - 7:00 PM
Event Type:
Protest
Organizer/Author:
A.N.S.W.E.R. Coalition
Email:
answer [at] answersf.org
Phone:
415-821-6545
Address:
2489 Mission St. Rm. 24
Location Details:
San Francisco Chronicle building, at the corner of 5th St. and Mission
On the day after 10,000 people marched and rallied in San Francisco on January 10 to demand “Let Gaza Live,” the San Francisco Chronicle reported the demonstration to have been just “more than 1,000 people.” In their January 10 edition, on the morning of the protest, the Chronicle publicized the pro-Israeli war counter-protest on the steps of City Hall, but failed to mention the “Let Gaza Live” anti-war demonstration.

Immediately after the march, at 5 p.m. on Saturday, Jan. 10, the Chronicle’s website featured the march as its top story under the headline, “Thousands Protest in San Francisco.” By the time the Sunday paper was printed, however, the number of participants had been reduced to “more than 1,000.”

Despite being presented with irrefutable video and photo evidence (linked below) that they had massively undercounted the number of people participating in the march and rally, the Chronicle editors have declined to print a correction.

Join us on Thursday, January 15 to demand that the corporate media stop the lies and distortions about the Israeli war against Gaza and the movement opposing the war. The protest will take place at the S.F. Chronicle building, at the corner of 5th St. and Mission in San Francisco. (One block from Powell St. BART). Similar protests will be taking place this week in Washington DC and other cities

January 10 saw the biggest outpourings thus far in the U.S. against the horrific Israeli assault on Gaza. But much of the corporate media – and especially daily newspapers -- from Washington (site of the largest demonstration which the Washington Post failed to mention at all) to Los Angeles, from New York to San Francisco, either completely ignored or vastly underestimated the protests.

The Israeli offensive has now killed nearly 1,000 Palestinians, wounded more than 4,000 and inflicted incalculable damage on one of the poorest areas of the world. Since the Israeli bombing and invasion began, a reported 10 Israeli soldiers and 4 civilians have been killed. Yet most of the mainstream media gives equal or greater time to the casualties and views of the Israeli side. The same media relentlessly misrepresents the cause of the crisis, invariably blaming the Palestinian side while ignoring years of lethal blockade, air strikes and “targeted assassinations” carried out by Israel against the people in Gaza.

Here are excerpts from the letter sent to the Chronicle by Richard Becker of the ANSWER Coalition:

“Once again we have the Chronicle publishing a ridiculously low estimate of the number of people at a demonstration in San Francisco. I'm referring to the Chronicle article (Jan. 11, 2009) reporting that "more than 1,000" people participated in the protest against Israel's assault on Gaza . . .

“On Saturday evening, immediately after the march, the Chronicle's http://www.sfgate.com website reported that "thousands" had marched in SF, as did many Bay Area TV stations and other media outlets. Photos on the sfgate.com site which accompany the online edition of your article illustrate that there were in fact many thousands of people marching, For example, this photo from sfgate.com, taken by Chronicle photographer Paul Chinn, shows just a small section of a march which stretched several blocks.
http://www.sfgate.com/cgi-bin/object/article?f=/c/a/2009/01/11/MNK6157880.DTL&o=21

“You can also view video of the march and other media coverage, much of which starkly contrasts with the Chronicle's coverage.
http://www.indybay.org/newsitems/2009/01/11/18561688.php
http://www.youtube.com/user/leftionthenews


END_OF_DOCUMENT_TOKEN_TO_BE_REPLACED
Added to the calendar on Tue, Jan 13, 2009 3:20PM
Add Your Comments
Latest Comments
Listed below are the latest comments about this post.
These comments are submitted anonymously by website visitors.
TITLE
AUTHOR
DATE
Boxer too today -- only Israel matters
reader
Support Independent Media
We are 100% volunteer and depend on your participation to sustain our efforts!