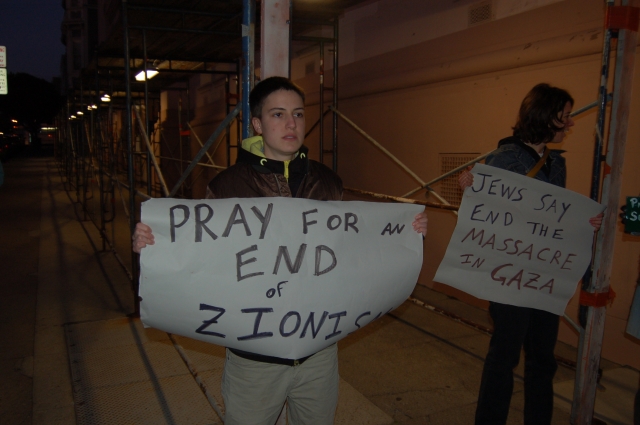 original image (3008x2000)
The International Jewish anti-Zionist Network has come to express our outrage at the Jewish Community Relations Council's "solidarity gathering for Israel." We represent the voices of Jews in the Bay Area and across the world who condemn Israel's current massacre of the people of Gaza, and who stand against Israel's ongoing conquest of Palestine. The Zionists gather today to pray in solidarity with Israel, for a bloody victory over the Palestinian people. They pray for the returned "stability" of an oppressive military occupation that they speciously call "peace." As anti-Zionist Jews, we condemn any prayer, indeed, any action taken in support of the criminal and genocidal state of Israel. In this tragic moment, we pray, hope, and work for the self-determination of the Palestinian people and their right to a just peace in their land, and we support the international call for boycott, divestment and sanctions against Israel.

The Israeli government claims to speak for Jews worldwide. As Jews, we cannot stand silent while Israel murders innocent civilians in our name. As Jews, we condemn the unspeakable savagery of the Israeli army against Palestinian people taking place in Gaza. As of the morning of January 8th, 2009, 750 Palestinians have been killed during the last thirteen days of Israeli assault—including 219 children. More than 3000 Palestinians have been seriously injured. The Gaza strip is the most densely populated area in the world, half the population is children, and 80 percent live below the UN poverty line. Israel is bombing civilians from the sky, and attacking them on the ground. Tens of thousands of internal refugees are running from the Israeli army that has targeted homes, mosques, hospitals, ambulances, refugee camps, and just yesterday killed forty people who were taking refuge in a UN school. The humanitarian crisis mounts: food, water, and electricity are scarce in Gaza. Overflowing hospitals are running on emergency generators for power; the Red Cross said today, "the Israeli military has failed to meet its obligation under international humanitarian law to care for and evacuate the wounded."

The world will not stand for Israel 's complete disregard for human life and their massacre of innocents. This week, voices worldwide have criticized Israel's actions--the Pope's Justice Minister has likened Gaza to "a big concentration camp." And, prior to the attacks on Gaza, UN General Assembly President Miguel D'escoto Brockmann likened Israel's policies to South Africa's treatment of blacks under apartheid, urging the UN to support civil society's "non-violent campaign of boycott, divestment and sanctions to pressure Israel to end its violations."

We came to this so-called “gathering” on January 8th, holding signs against the massacre and colonial occupation of Gaza. Although we are Jewish, we were not allowed to enter the synagogue. Synagogues (in Hebrew bait-Knesset) come from the verb “hitcansot”, meaning “gathering,” or the place where the Jewish community comes together. The denial of our presence in this so-called Jewish gathering is another example of how our Jewish communities and identities are hijacked by Zionists who claim that Jewishness is a euphemism for militarism, ethnic cleansing, and apartheid. Furthermore, this demonstration comes a day after many of us took to the streets with the people of Oakland to condemn the killing of Oscar Grant by the police. Many people held signs saying, “stop the killing from Gaza to Oakland.” We share the sentiment of those calling for an end to state violence worldwide, and we support the joint struggle of people of color in their right to fight against all forms of racial oppression.
§
by M. 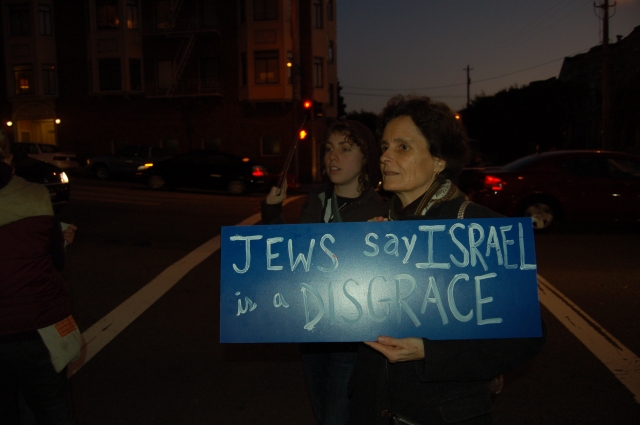 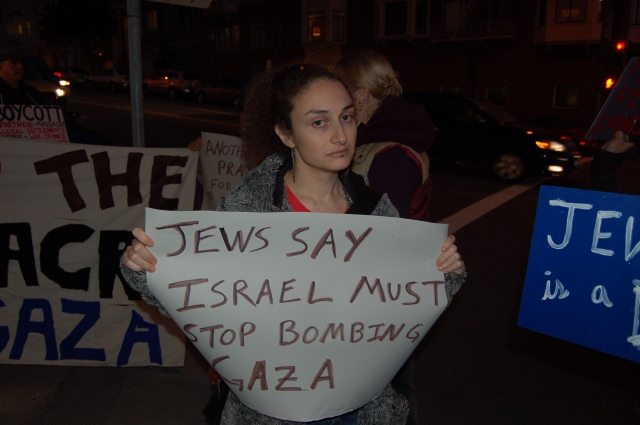 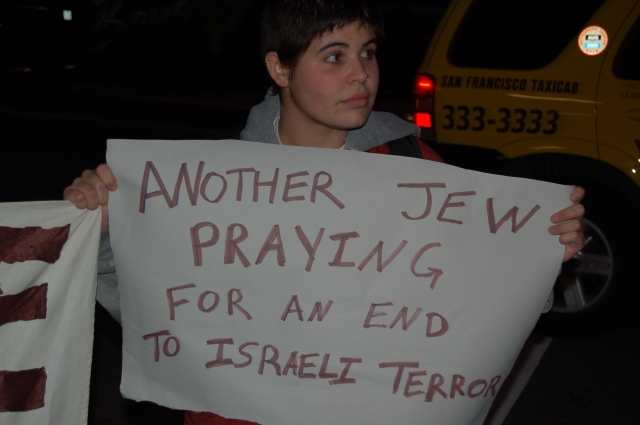 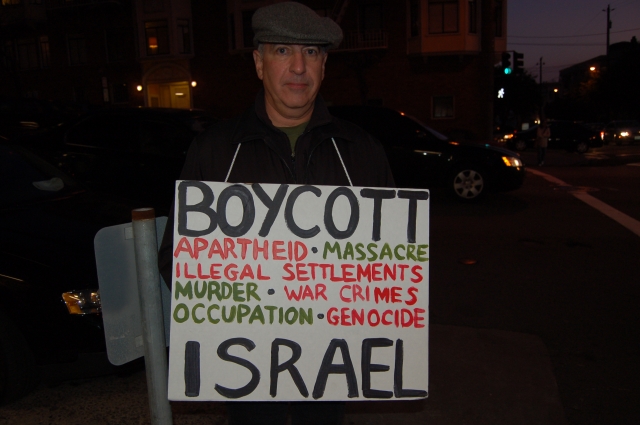 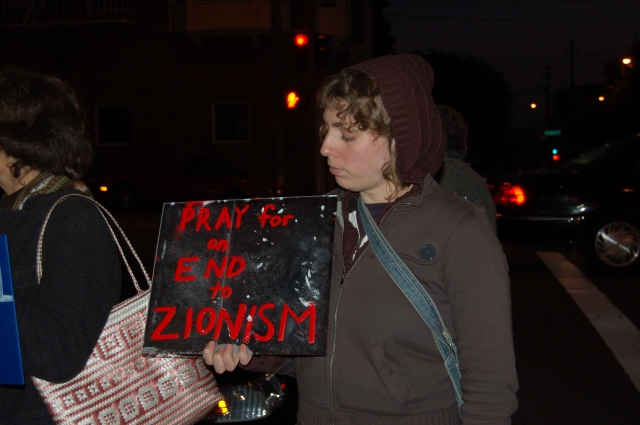 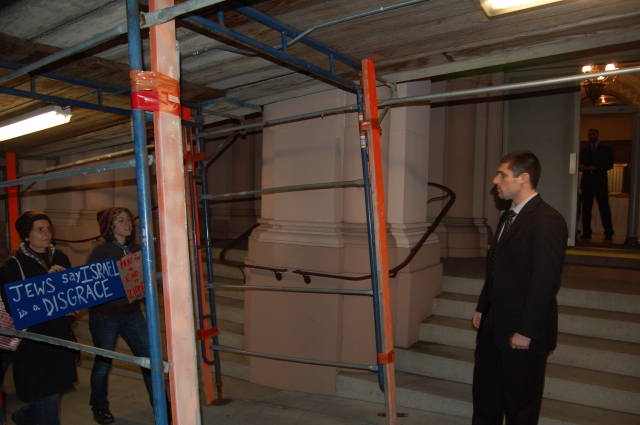 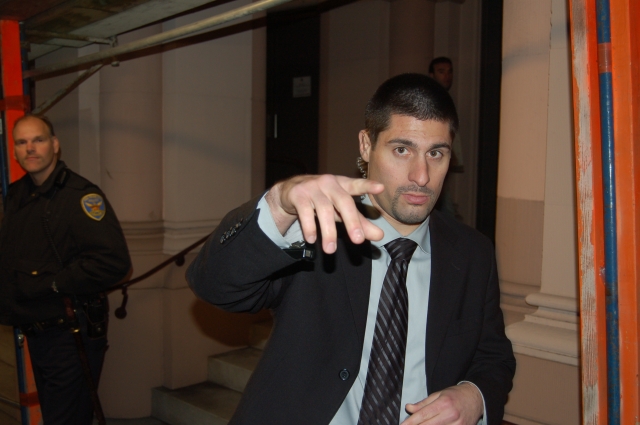 original image (3008x2000)
WAR
I, too, have declared war:
you’ll need to divert part of the force
deployed to wipe out the Arabs-
to drive them out of their homes
and expropriate their land-
and set it against me.
You’ve got tanks and plains,
and soldiers by the battalion;
you’ve got the rams’ horns in your hands
with which to rouse the masses;
you’ve got men to interrogate and torture;
you’ve got cells for detention.
I have only this heart
with which I give shelter
to an Arab child.
Aim your weapon at it:
even if you blow it apart
it will always
always mock you.

Add Your Comments
Latest Comments
Listed below are the latest comments about this post.
These comments are submitted anonymously by website visitors.
TITLE
AUTHOR
DATE
How does one join IJAN?
deanosor
Shanda!
Tevye
shame
antonia rojas
The seige of Gaza
Joel Kabakov PhD
Non Jew White Scotland
scottish
Mike, don’t you have anything
better to do?
Of course they don't (speake for ALL Jews)
Mike Novack
Support Independent Media
We are 100% volunteer and depend on your participation to sustain our efforts!