Add an Event
Newswire
Calendar
Features
Home
Donate
From the Open-Publishing Calendar
From the Open-Publishing Newswire
Indybay Feature
Publish to Newswire
Add an Event
Related Categories: San Francisco | Police State & Prisons
An Anarchist Perspective on the “Violence” of the Oscar Grant Riots
by bay area (a)narchists
Monday Jan 12th, 2009 8:42 PM
The news of the riots that followed the shooting of 22-year-old Oscar Grant has sensationally occupied the headlines of Bay Area newspapers and television programs over the last week. These reports have focused almost exclusively on the vandalism of local businesses and cars and have remained chillingly silent on the topic of the police violence that occurred that evening. The troubling assumption made throughout all of the reportage is that the destruction of storefront facades and car windows somehow equates to the horrific execution of Oscar, and that it justified the police violence against demonstrators that night. 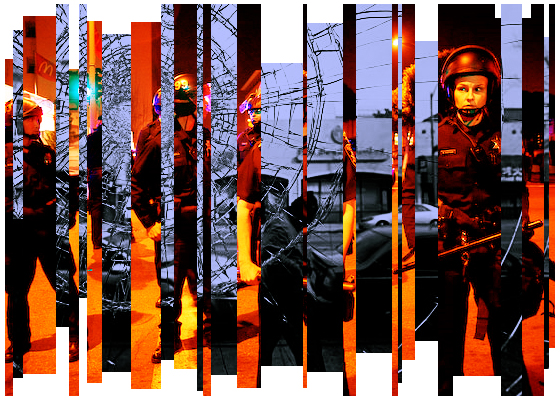 As anarchists who were involved in the demonstrations, we fully reject the notion that the vandalizing of private property could ever be weighed against the violence committed against not only Oscar Grant, but against youth of color every day by police and the prison system. This way of thinking, that gives property more value than people, is what allows the violence of the police to become dangerously normalized and unquestioned.

At the time of this writing, the police officer that executed Oscar Grant in cold blood still walks the streets without criminal charges, while some of those arrested during the demonstration are locked away in prison awaiting trial and will likely face harsh sentences. The violent system that so quickly punishes those who demonstrated while simultaneously protecting the murderer of Oscar Grant should be the target of our collective criticism and condemnation, not the angry youth who reacted to the shooting in the streets that night. While Bay Area journalists have presented themselves as being objective reporters of the aforementioned events, their reports and broadcasts repeatedly reveal their bias in favor of the police when recounting the evening of the demonstrations. The endless images of smashed windows and burned cars, and the litany of condemnations of "lawlessness" and "destruction" serve to obscure the most violent events of the night, and indeed the only violence perpetrated against human beings: the brutal police beatings of protesters. One witness described a police officer beating a protester on the head so severely his bike helmet was split in two. Another described how police made over 70 protesters lie down on their stomachs in positions that eerily echoed Oscar Grant's pose as he was shot. A visibly pregnant woman was screaming in pain after being attacked by police. It is clear to us that the police were protecting private property and not human beings that night. We are disgusted by this, and we condemn Bay Area journalists for being complicit with police violence by attempting to justify their actions.

A very distorted and troubling view of what constitutes violence in our society is perpetuated by the current coverage. A car does not scream in agony when it burns, and similarly a storefront facade does not sob when its plate glass window shatters to the sidewalk below. It is true that the cost of replacing cars and windows may be a burden for the working-class people who were affected, and that is certainly regrettable. However, there is simply no comparison between those costs and the brutal consequences of police violence. The youth who were brutalized by police the night of the demonstration will have to live with their injuries and traumas for years to come, and Oscar Grant cannot be replaced. We call on the public to recognize the real violence in our society – the violence of the police, the prisons and the politicians. As long as police and corrupt politicians protect the cop that killed Oscar, as long as youth of color are continuously attacked and criminalized by the police and court system, as long as property is valued over people - we will not grieve over the property vandalized on Wednesday night.