Add an Event
Newswire
Calendar
Features
Home
Donate
From the Open-Publishing Calendar
From the Open-Publishing Newswire
Indybay Feature
Publish to Newswire
Add an Event
Related Categories: East Bay | Police State & Prisons
Street Action After Oscar Grant Rally and March, Oakland, 1/7/09: photos (3 of 3)
by dave id
Sunday Jan 11th, 2009 4:13 AM
Once the police started aggressively pushing the hundred or so remaining protesters down 14th Street, an advanced-guard of protesters ran ahead and began to break store and car windows. 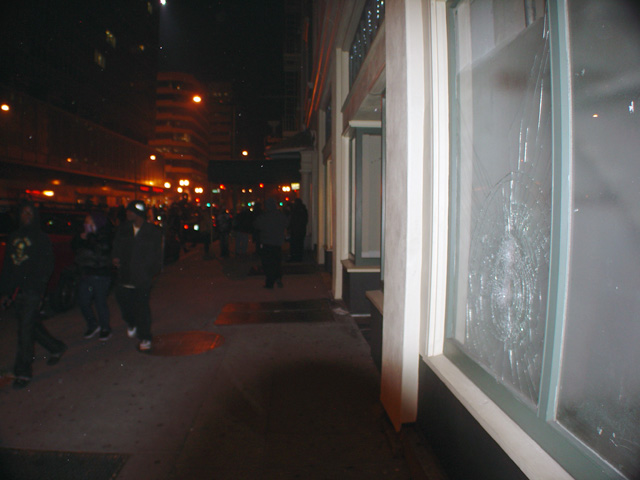 This photo shows the first window broken on 14th, not a block ahead of the slow-moving police line pushing on protesters.
http://www.indybay.org/newsitems/2009/01/0...
§Garbage can across the street from the broken window
by dave id Sunday Jan 11th, 2009 4:13 AM 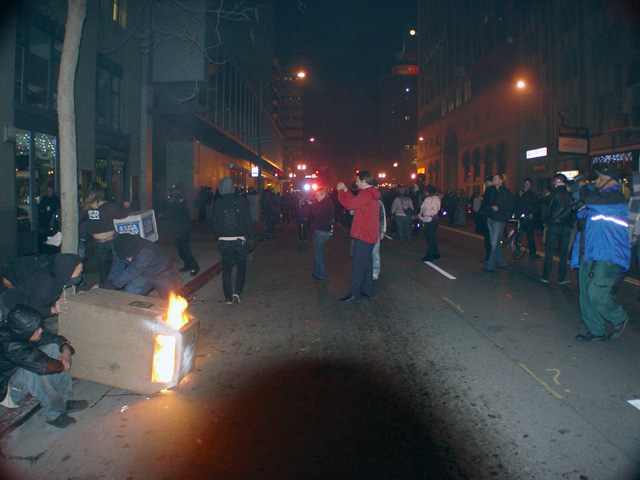 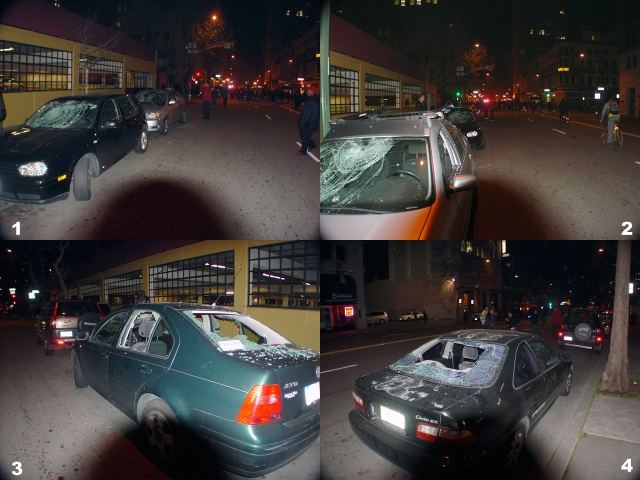 original image (1280x960)
It was the rare car that didn't end up with at least one broken window the whole length of 14th. Virtually every car had damage.

The SUV ahead of the green car in #3 belonged to an editor of the Oakland Post, who was in his office at the time writing a story on the Oscar Grant murder. He was actually a good sport about the damage to his vehicle, especially considering that it was torched before the police line made it this far down 14th.
http://www.indybay.org/newsitems/2009/01/0...
§Car ignites as police approach
by dave id Sunday Jan 11th, 2009 4:13 AM 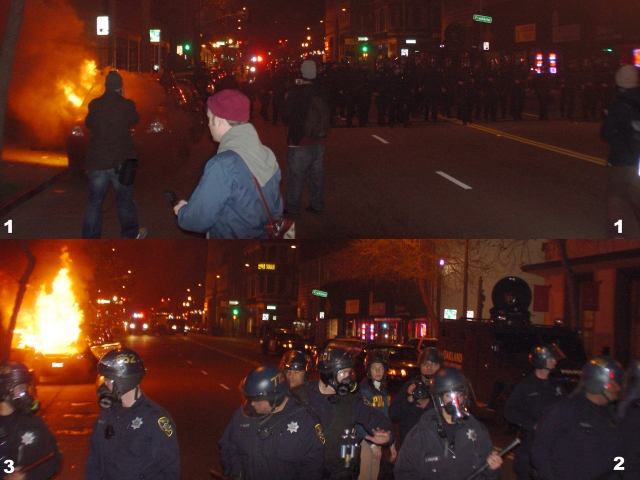 original image (1280x960)
"Ken Epstein, assistant editor of the Oakland Post, who was finishing an article about Grant's death, watched from the 12th story of his office at 14th and Franklin streets as his 2002 Honda CR-V disintegrated in a roar of flames as the police continued to push protesters down 14th Street from the intersection with Broadway, smashing store windows and setting trash cans on fire." (http://www.insidebayarea.com/oaklandtribune/ci_11401338)
http://www.indybay.org/newsitems/2009/01/0...
§Further up 14th, McDonald's at 14th and Jackson was definitely not lovin' it
by dave id Sunday Jan 11th, 2009 4:13 AM 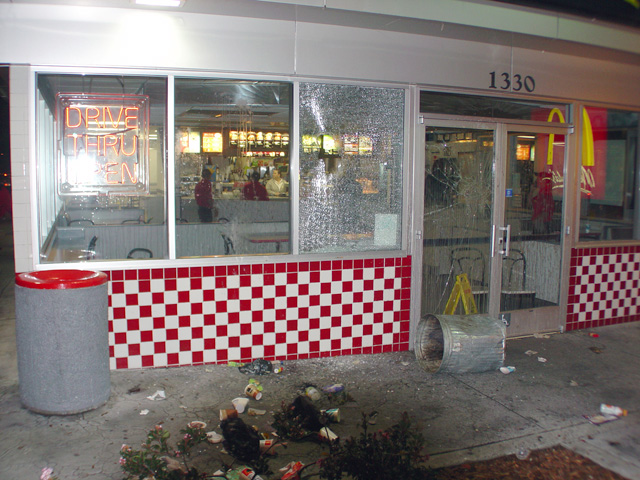 An employee was screaming in the street about damage, yelling for police action
http://www.indybay.org/newsitems/2009/01/0...
§Young man being tasered unnecessarily
by dave id Sunday Jan 11th, 2009 4:13 AM 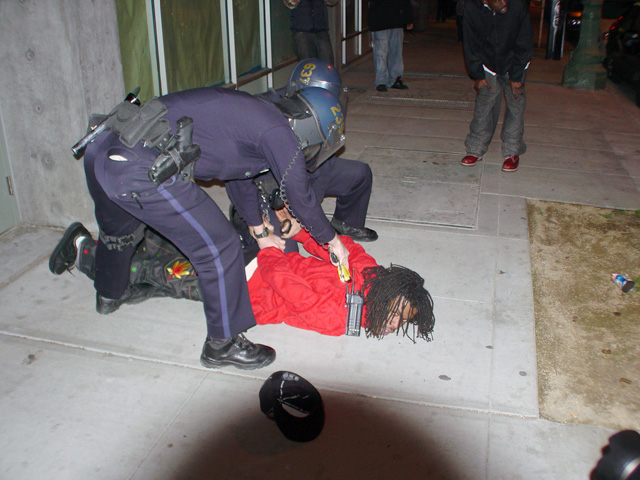 This guy was walking with a group of friends about a half block past McDonald's on 14th when police targeted just him and chased him in a circle back around the McDonalds. He then ran across the street and once he saw there were cops running at him from both sides, he just stopped and stood there. Cops pushed him down and immediately began tasering him as he lay there not resisting. They may have tasered him for close to a full minute. 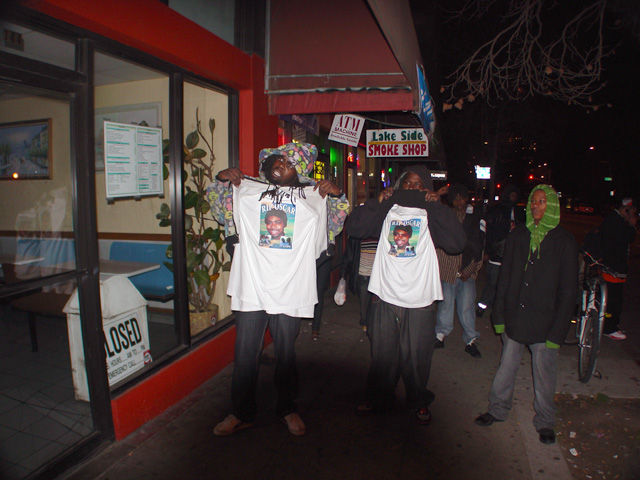 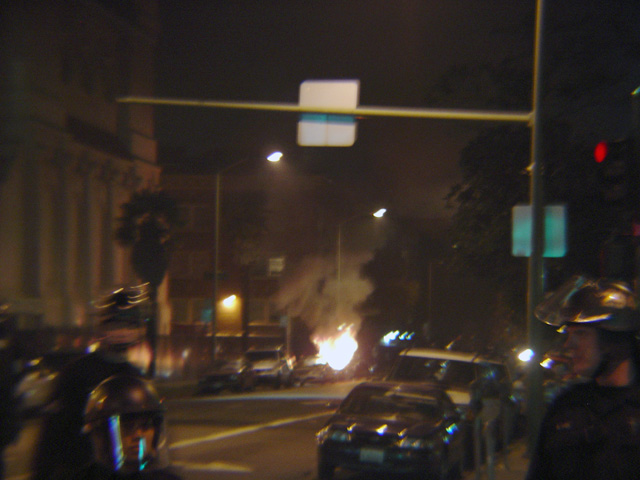 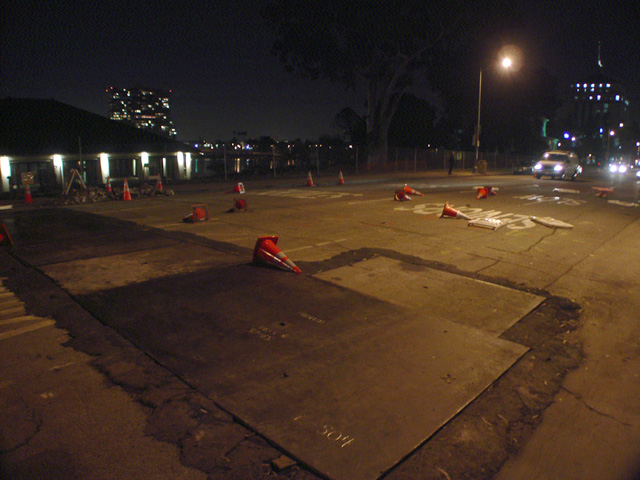 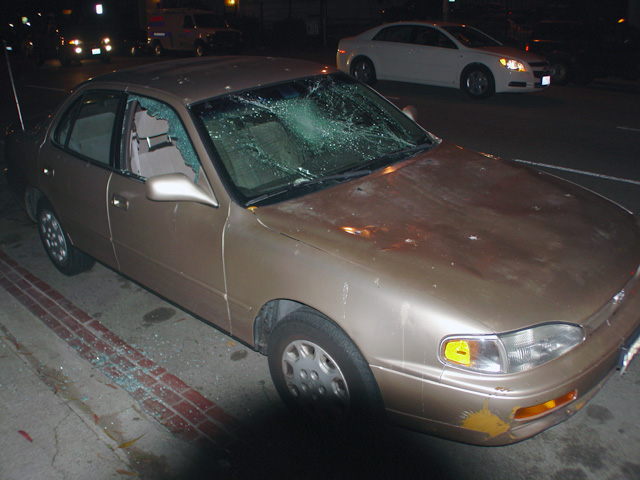 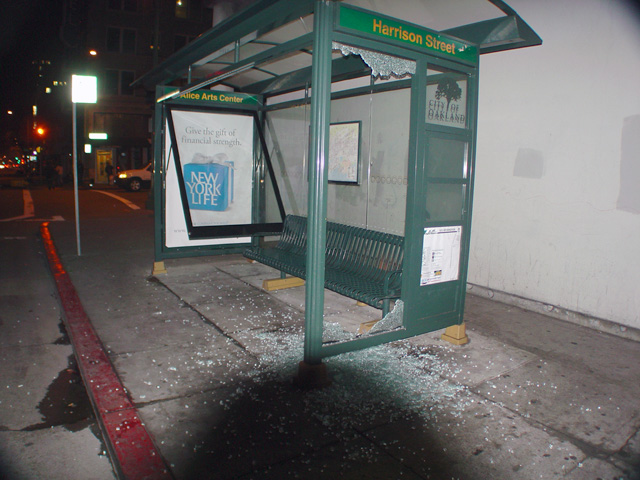 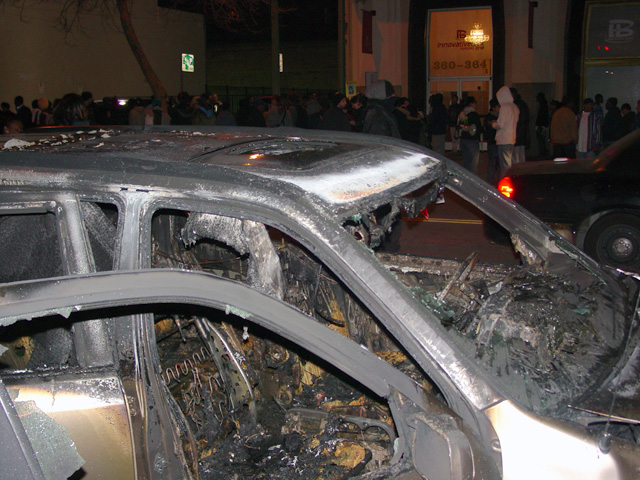 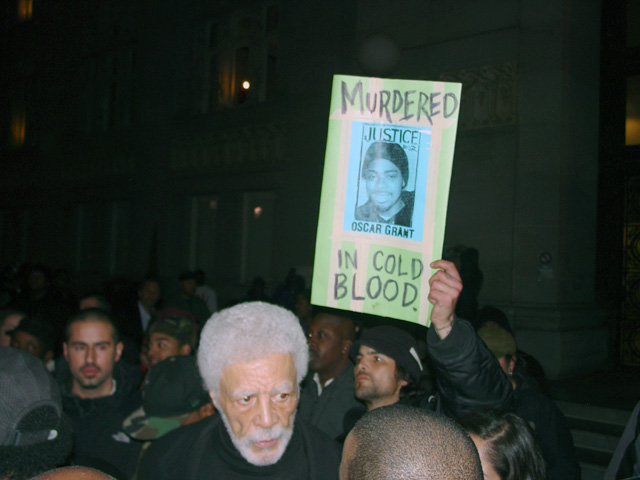 Protesters who had dispursed all over the area began to congregate around Dellums as he walked down 14th back towards Broadway. He said he had requested police pull back and stop roughing up protesters.
http://www.indybay.org/newsitems/2009/01/0...
§Dellums returns to City Hall with crowd
by dave id Sunday Jan 11th, 2009 4:13 AM 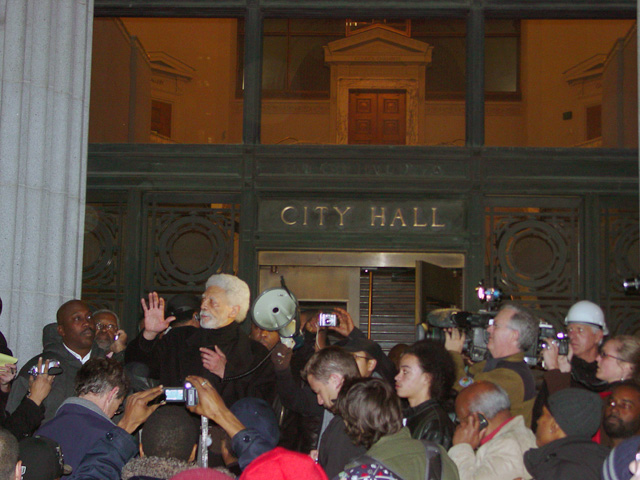 Folks weren't really wanting to hear what he had to say about being peaceful and patient seven days after the murder of Oscar Grant when the officer had not been detained or even questioned. Lots of catcalls and heckling from the crowd. When he ducked back into City Hall building almost everyone in the crowd booed.
http://www.indybay.org/newsitems/2009/01/0...
§"Round 2" on San Pablo, just north of City Hall and Frank Ogawa Plaza
by dave id Sunday Jan 11th, 2009 4:13 AM 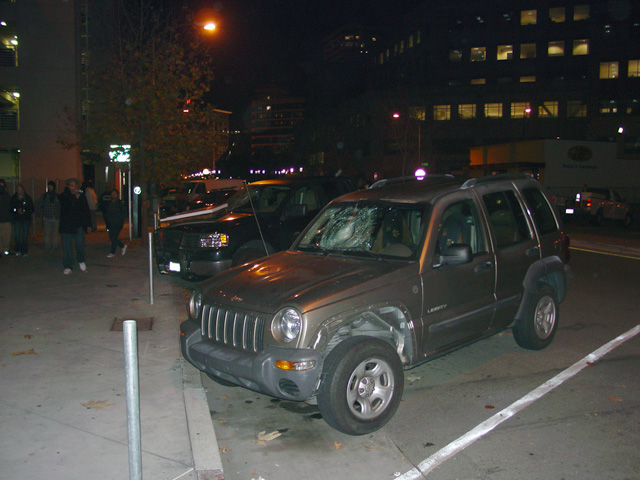 When the booing stopped, several protesters shouted "Round 2" while others shouted "Revolution Now" and then people started running north through Frank Ogawa Plaza. Once people hit San Pablo, storefront and car windows again started being broken.

Police in riot gear rushed to the south end of San Pablo and, for the second time in the night, fired tear gas into the crowd. At that point, people ran up to 17th Street and once across Broadway more windows were broken and dumpsters lit on fire.
http://www.indybay.org/newsitems/2009/01/0...
§More fires on 17th Street east of Broadway
by dave id Sunday Jan 11th, 2009 4:13 AM 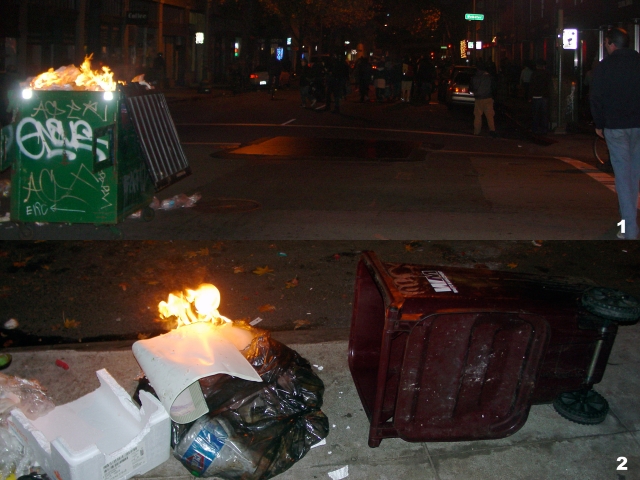 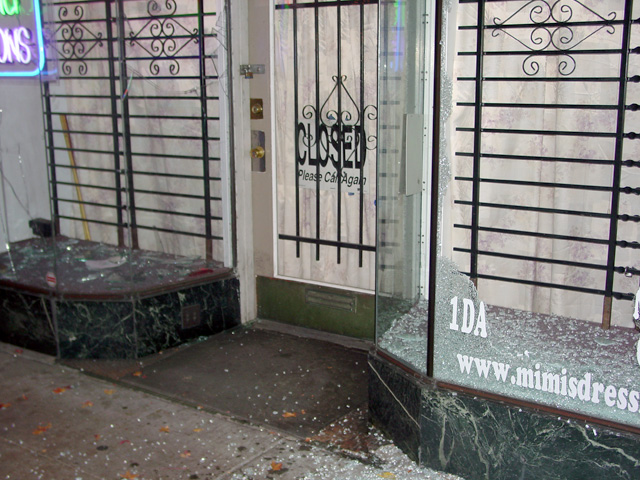 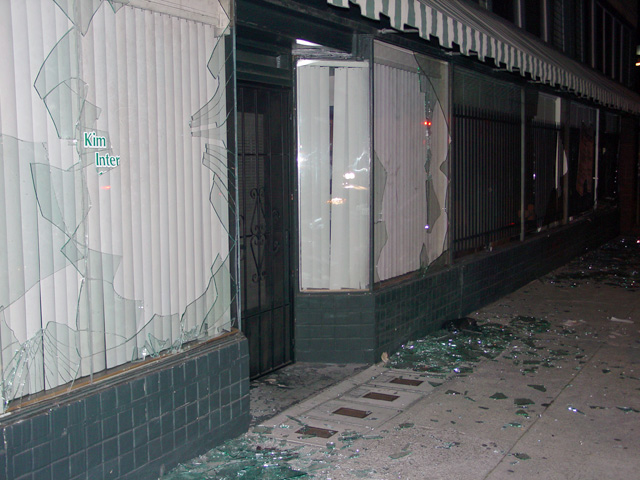 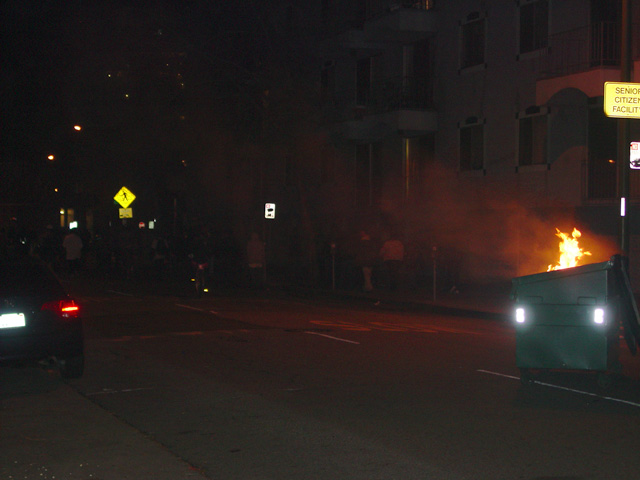 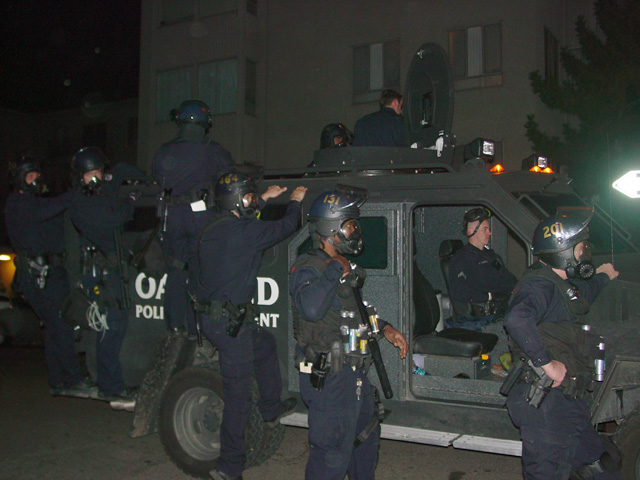 but the protesters has again dispersed and disappeared before the cops caught up with them. Police seemed stunned and without direction at that point.

Eventually people began to regroup in the street at about 15th and Broadway. Once the police moved in on them, 75 or so people moved up Telegraph, continuing to break glass and throw debris into the road from all of the city and private construction going on in Oakland's "Uptown" now.